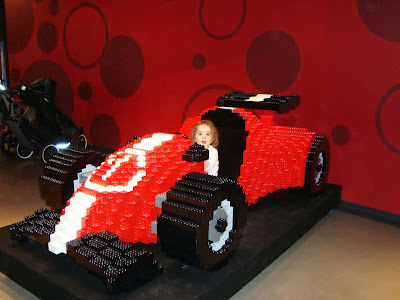 Indianapolis, IN, USA (March 5, 2012) /PRWEB/ — Just in time for spring break, The Children’s Museum of Indianapolis is asking visitors “What Will You Build?” in the new exhibit LEGO® Travel Adventure. Opening March 10, the next exhibit in The Children’s Museum’s collaboration with LEGO Systems, Inc., LEGO Travel Adventure invites children and their families to use LEGO bricks to create their own imaginary dream machines capable of taking them to some fantastic destinations.

There are many different ways to travel where you need to go and in LEGO Travel Adventure, visitors are invited to create vehicles capable of flying, driving, and floating – or all three! To go on a travel adventure to exotic locations, children are asked to think creatively, plan, and build vehicles to move through all kinds of terrain – mountains, oceans, jungles, deserts, and more. Dioramas featuring Florida, Hawaii, Paris and San Francisco will help serve as inspiration for creating vehicles with wheels, wings, masts and more.

LEGO Travel Adventure features creations by LEGO Master Builders including recreations of the driving of the Golden Spike in the Transcontinental Railroad, the building of the first Model T, the Wright Brothers flight at Kitty Hawk, and a cruise liner. Children can also have their photo taken behind the wheel of a kid-size race car created entirely out of LEGO® DUPLO® bricks.

Also included in the exhibit is a diorama featuring the Travel Adventure Vehicle (T.A.V.), an approximately 6-inch hybrid LEGO brick vehicle created specifically for the new exhibit by LEGO Master Builder Steve Gerling. In keeping with the theme of the exhibit to create vehicles capable of taking children and families anywhere their imagination can go, the T.A.V. is equipped with all of the right vehicle parts to travel across land, under water, and in the air. The diorama includes several versions of the vehicle traveling across many terrains including over roads, up a mountain, under water and taking off for a ride through the sky! In addition to the diorama, a full-size version of the T.A.V. is also available for families to go on an adventure together inside.

Age-appropriate build tables featuring parts and pieces from popular LEGO® sets such as the LEGO® City, LEGO® Creator, LEGO® Friends, and LEGO® DUPLO® lines are available in the exhibit for children to create their own vehicles. Visitors are also invited to take photos of their exhibit creation to email to their friends or enter in the museum’s LEGO Travel Adventure Challenge to win a trip to LEGOLAND® Florida courtesy of AAA Insurance. Learn more about the LEGO Travel Adventure Challenge online at childrensmuseum.org/lego-contest.

LEGO Travel Adventure is the second in a series of exhibits to be produced in conjunction with LEGO Systems, Inc. and will begin a five-year traveling exhibit schedule. The previous exhibit, LEGO® Castle Adventure debuted at The Children’s Museum of Indianapolis in 2009 and is in the middle of its five-year traveling exhibit run which includes stops at museums and science centers throughout the United States. Additional LEGO® exhibits are planned for the future. Sponsorship opportunities for these exhibits are still available.

LEGO Travel Adventure was produced by The Children’s Museum of Indianapolis in cooperation with LEGO Systems, Inc. The debut of the exhibit in Indianapolis is presented by AAA Insurance and supported by Coca-Cola Refreshments and Peyton Manning Children’s Hospital at St.Vincent. LEGO and the LEGO logo are trademarks of the LEGO Group. © 2012 The LEGO Group. All rights reserved.

ABOUT LEGO SYSTEMS, INC.
The LEGO Group (http://www.LEGO.com) is a privately held, family-owned company, based in Billund, Denmark. Founded in 1932, it is today one of the world’s leading manufacturers of play materials for children. The company is committed to the development of children’s creative and imaginative abilities through its products, which can be purchased in more than 130 countries.

ABOUT THE CHILDREN’S MUSEUM OF INDIANAPOLIS
The Children’s Museum of Indianapolis is a nonprofit institution committed to creating extraordinary family learning experiences across the arts, sciences and humanities that have the power to transform the lives of children and families. For more information about The Children’s Museum, visit http://www.childrensmuseum.org.

Joe Kleimanhttp://wwww.themedreality.com
Raised in San Diego on theme parks, zoos, and IMAX films, InPark's Senior Correspondent Joe Kleiman would expand his childhood loves into two decades as a projectionist and theater director within the giant screen industry. In addition to his work in commercial and museum operations, Joe has volunteered his time to animal husbandry at leading facilities in California and Texas and has played a leading management role for a number of performing arts companies. Joe previously served as News Editor and has remained a contributing author to InPark Magazine since 2011. HIs writing has also appeared in Sound & Communications, LF Examiner, Jim Hill Media, The Planetarian, Behind the Thrills, and MiceChat His blog, ThemedReality.com takes an unconventional look at the attractions industry. Follow on twitter @ThemesRenewed Joe lives in Sacramento, California with his wife, dog, and a ghost.
Share
Facebook
Twitter
Linkedin
Email
Print
WhatsApp
Pinterest
ReddIt
Tumblr
Previous articleNoah’s Ark, "America’s Largest Water Park," Joins Palace Entertainment Roster
Next articleIAAPA Announces 2013 Leadership Conference to Take Place in Brazil