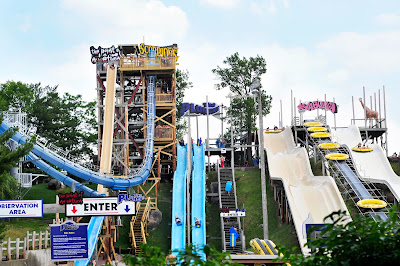 See more IPM articles about waterparks at this link.

Noah’s Ark is said to be America’s largest water park with 70 acres, 51 water attractions, including 2 wave pools and 2 lazy rivers plus dozens of other various attractions. Located in the city of Wisconsin Dells, known as the “Water Park Capital of the World,” Noah’s Ark is the region’s most popular family attraction and has two hotels on the property featuring over 300 rooms. Noah’s Ark lays claim to having the greatest variety of water rides in the nation, including Black Anaconda, the nation’s most thrilling watercoaster. The Travel Channel hailed Noah’s Ark as “THE place for water in the Midwest,” and TripAdvisor.com named Wisconsin Dells the number one family vacation destination in the U.S.

Fernando Eiroa, Palace Entertainment’s President and CEO, comments, “We are very happy to be adding such an iconic water park to Palace’s array of family parks across the nation. We understand how important this park is within the Wisconsin Dells community, and we are dedicated to enhancing the Noah’s Ark brand. We look forward to meeting our new neighbors and community leaders and forging lasting relationships and partnerships.”

Tim Gantz, one of Noah’s Ark’s previous owners stated, “When we considered the sale of the park, we were excited that a company such as Palace, with so much experience in Water Parks, Theme Parks, Animal Parks and Family Entertainment Centers, would come to this area.”

“We look forward to the future success of Noah’s Ark, its employees, and see this as a positive move for the area as a whole,” added former co-owner Dan Gantz.

Joe Kleimanhttp://wwww.themedreality.com
Raised in San Diego on theme parks, zoos, and IMAX films, InPark's Senior Correspondent Joe Kleiman would expand his childhood loves into two decades as a projectionist and theater director within the giant screen industry. In addition to his work in commercial and museum operations, Joe has volunteered his time to animal husbandry at leading facilities in California and Texas and has played a leading management role for a number of performing arts companies. Joe previously served as News Editor and has remained a contributing author to InPark Magazine since 2011. HIs writing has also appeared in Sound & Communications, LF Examiner, Jim Hill Media, The Planetarian, Behind the Thrills, and MiceChat His blog, ThemedReality.com takes an unconventional look at the attractions industry. Follow on twitter @ThemesRenewed Joe lives in Sacramento, California with his wife, dog, and a ghost.
Share
Facebook
Twitter
Linkedin
Email
Print
WhatsApp
Pinterest
ReddIt
Tumblr
Previous articlePlans Announced For Five Public Spaces at National Museum of the US Army
Next articleLEGO Travel Adventure Rolls Into Children’s Museum of Indianapolis