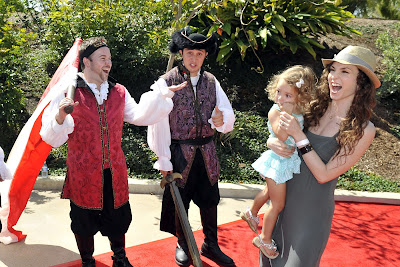 Carlsbad, CA, USA — LEGOLAND® California Resort rolled out the red carpet and welcomed some of Hollywood’s stars for the official launch of its new ride, Pirate Reef. Celebrities became pirates for the day as they climbed aboard boats, plunged 25 feet down a chute between two pirate ships making a giant splash and getting totally soaked. The fun didn’t stop there for the partygoers as they chose which ship to board and who they’d like to battle: Captain Blue Brick or Captain Red Brick with water cannons.

“You would think I’d put a bathing suit on, but I wanted the full thrill of being drenched with real clothes on, I think that is how you have to ride a water ride, “ joked Higgins. “Oh man, they say you’re going to get wet and yes, you get wet! It’s good fun though; it’ll keep you cool on a hot day…It’s perfect,” said MacDonald who took his dad with him on his first trip on Pirate Reef. “One of the best parts are the water cannons – you can shoot at other riders get them extra wet which is pretty cool,” said Dr. Sears.

After enjoying Pirate Reef, guests and their families took in some fun in the sun at LEGOLAND Water Park. Many spent the rest of the day exploring the family theme park and SEA LIFE Carlsbad Aquarium.

Pirate Reef is the first attraction to be accessible not only through Pirate Shores within LEGOLAND California, but also via LEGOLAND Water Park. Throughout Pirate Reef, more than 30 pirate themed LEGO® models, created out of more than 223,000 LEGO bricks, are featured including both Captain Red Brick and Captain Blue Brick, pirates, monkeys, parrots and more.

LEGOLAND® California is a 128-acre interactive family theme park dedicated to families with children between the ages of 2 and 12. With more than 60 rides, shows and attractions, LEGOLAND is geared towards family fun! There are four other LEGOLAND Parks in the world – LEGOLAND Billund in Denmark, LEGOLAND Deutschland near Günzburg, Germany, LEGOLAND Windsor outside of London and LEGOLAND Florida in Winter Haven. The LEGOLAND theme parks are a part of Merlin Entertainments Group, the second largest attractions operator in the world. Merlin Entertainments is the leading name in location based, branded, family entertainment and currently operates 89 attractions worldwide serving more than 46 million visitors. For the most current information, visit www.LEGOLAND.com or call (760) 918-LEGO.

Joe Kleimanhttp://wwww.themedreality.com
Raised in San Diego on theme parks, zoos, and IMAX films, Joe Kleiman would expand his childhood loves into two decades as a projectionist and theater director within the giant screen industry. In addition to his work in commercial and museum operations, Joe has volunteered his time to animal husbandry at leading facilities in California and Texas and has played a leading management role for a number of performing arts companies. Joe has been News Editor and contributing author to InPark Magazine since 2011. HIs writing has also appeared in Sound & Communications, LF Examiner, Jim Hill Media, and MiceChat. His blog, ThemedReality.com takes an unconventional look at the attractions industry. Follow on twitter @ThemesRenewed Joe lives in Sacramento, California with his fiancé, two dogs, and a ghost.
Share
Facebook
Twitter
Linkedin
Email
Print
WhatsApp
Pinterest
ReddIt
Tumblr
Previous articleVIDEO: RiverRush, Dollywood’s Splash Country
Next articleFilmmaker and Explorer James Cameron to Present Keynote at GSCA International Conference

SoFi Stadium to be added to LEGOLAND California’s Miniland U.S.A.