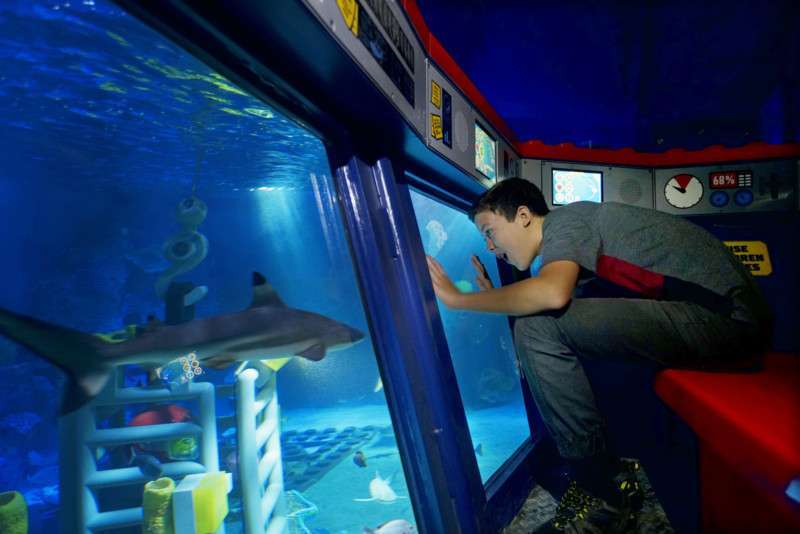 LEGO® champagne bottles were bursting with streamers and the crowd of media and special guests cheered as the submarines were christened for LEGO® City: Deep Sea Adventure submarine ride at LEGOLAND®California Resort. The interactive ride features more than 2,000 sea animals including several species of sharks, rays and other tropical fish amid new LEGO®models all themed around a ship’s sunken treasure!

“We’ve really passed the industry benchmark with this ride,” said LEGOLAND California Resort General Manager Peter Ronchetti. “I’m so excited to see the looks on guests faces when they experience Deep Sea Adventure for the
first time because they honestly don’t know what to expect as there is nothing to compare it to in North America!”

LEGO® CITY: Deep Sea Adventure submarine ride is Merlin Entertainments’ single largest investment for a ride in any LEGOLAND® Park. For the first time in the United States, LEGOLAND California Resort brings guests onboard a real submarine where they’ll go underwater to discover a truly amazing world filled with real sea animals. Through the use of interactive touchscreens at each porthole inside the sub, guests can help the LEGO® minifigure dive team identify LEGO® gems, pearls, gold coins and more throughout the more than four minute journey. Guests can reach one of three levels during each ride: Junior, Senior and Master Explorer.

Being around submarines is nothing new for Senior Project Manager, Thomas Storer, who was a Lieutenant in the US Navy stationed in San Diego earlier in his career. “The biggest difference between the submarines I’ve been on and the ones families will experience here at LEGOLAND California is they’ll be able to see the beautiful sharks, rays and tropical fish on the other side of the portholes!” Five species of sharks and several species of rays including a southern stingray with a five-foot wing span, are among the sea animals guests will discover.

The interactive touch pads aren’t the only feature that utilizes technology within Deep Sea Adventure. Before guests board the 22,000 pound submarines, they are given a briefing on the mission that awaits them by a 3-foot-tall LEGO diver whose face, with the help of a projector screen, is animated as he gives instructions to the explorers. As guests exit the ride, they enter the retail space where they can build their own virtual fish from LEGO and “release” it into the virtual ocean. If they’d like to build their own LEGO fish at home, all of the LEGO elements are available for purchase.

More than 30 children and their families from the Los Angeles and San Diego chapters of Ronald McDonald House Charities® were treated to an exclusive day at LEGOLAND® California Resort to embark on the maiden voyage. The children were among the first to experience the interactive underwater adventure following a check presentation as LEGOLAND California Resort donated $80,000 to help the chapters continue their programs that keep families of hospitalized children together and near the medical care and resources they need.

The submarine ride is included in the price of admission at LEGOLAND California Resort. For more information and to sign up for insider updates, visit LEGOLAND.com/deepsea2018.

Joe Kleimanhttp://wwww.themedreality.com
Raised in San Diego on theme parks, zoos, and IMAX films, InPark's Senior Correspondent Joe Kleiman would expand his childhood loves into two decades as a projectionist and theater director within the giant screen industry. In addition to his work in commercial and museum operations, Joe has volunteered his time to animal husbandry at leading facilities in California and Texas and has played a leading management role for a number of performing arts companies. Joe previously served as News Editor and has remained a contributing author to InPark Magazine since 2011. HIs writing has also appeared in Sound & Communications, LF Examiner, Jim Hill Media, The Planetarian, Behind the Thrills, and MiceChat His blog, ThemedReality.com takes an unconventional look at the attractions industry. Follow on twitter @ThemesRenewed Joe lives in Sacramento, California with his wife, dog, and a ghost.
Share
Facebook
Twitter
Linkedin
Email
Print
WhatsApp
Pinterest
ReddIt
Tumblr
Previous articleLeto Leto Aqua Park opens in Tyumen, Russia with Polin Slides
Next articleFormer SeaWorld and Falcon’s Creative design executive Josh Adcock joins BRPH