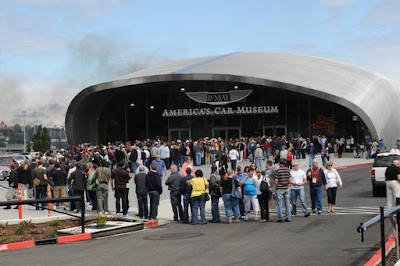 “This is a world-class museum,” said ACM President and CEO David Madeira. “Nothing in North Americacompares to our campus, which is why families have traveled from around Puget Sound, the Pacific Northwest and throughout the U.S. just to be part this celebration.

“We’ve created a fun destination in addition to a beautiful museum. We’ve got our 3.5 acre Haub Family Field to host concerts, car shows, civic events and even drive-in movies. We have an educational center that will attract 100,000 school kids each year and unique exhibits that blend cars, music, film and photos. And all of this is centered around preserving history and creating a thriving museum at the heart of the world’s automotive culture.”

After raising more than $60 million in the midst of the recession, ACM broke ground in June 2010. Two years later, the museum – projected to pump $34 million into the local economy – is showcasing exhibits that include: Ferrari in America; Indy Cars; the British invasion of the ’60s; the classic car era; alternative propulsion; and the collections of jewelry magnate Nicola Bulgari and Tacoma icon Harold LeMay (whose vast mix of vehicles was the genesis of the museum 14 years ago).

“My husband never met a car he didn’t like,” said Nancy about Harold, who passed away at age 81 in 2000. “We created initial fundraising plans in 1998 to memorialize a portion of the collection. Today he would be so proud to see his dream become a reality and have his passion for cars displayed in such an amazing setting.”

LeMay’s collection, estimated by the Guinness Book in the mid ’90s to include a 3,000-plus cars, trucks and motorcycles, highlights cars ranging from a 1916 Pierce Arrow to a 1956 Chevy two-door hardtop.

“Everybody remembers their first car, family driving vacations, a sports car they fell in love with as a teenager,” says Madeira. Personal experiences are part of life in America, and with the assistance of theHarold and Nancy LeMay collection, we’re showcasing more than a century of automotive history.”

Saturday’s grand opening festivities also featured a free concert from six-time Grammy winners Asleep at the Wheel as well as a traditional American Indian blessing from members of the Puyallup Nation.

Joe Kleimanhttp://wwww.themedreality.com
Raised in San Diego on theme parks, zoos, and IMAX films, Joe Kleiman would expand his childhood loves into two decades as a projectionist and theater director within the giant screen industry. In addition to his work in commercial and museum operations, Joe has volunteered his time to animal husbandry at leading facilities in California and Texas and has played a leading management role for a number of performing arts companies. Joe has been News Editor and contributing author to InPark Magazine since 2011. HIs writing has also appeared in Sound & Communications, LF Examiner, Jim Hill Media, and MiceChat. His blog, ThemedReality.com takes an unconventional look at the attractions industry. Follow on twitter @ThemesRenewed Joe lives in Sacramento, California with his fiancé, two dogs, and a ghost.
Share
Facebook
Twitter
Linkedin
Email
Print
WhatsApp
Pinterest
ReddIt
Tumblr
Previous articleIconic Letters from California Adventure Begin New Life at State Fairgrounds in Sacramento
Next articleDigitalis Relocates Inflatable Dome Production to Washington Headquarters