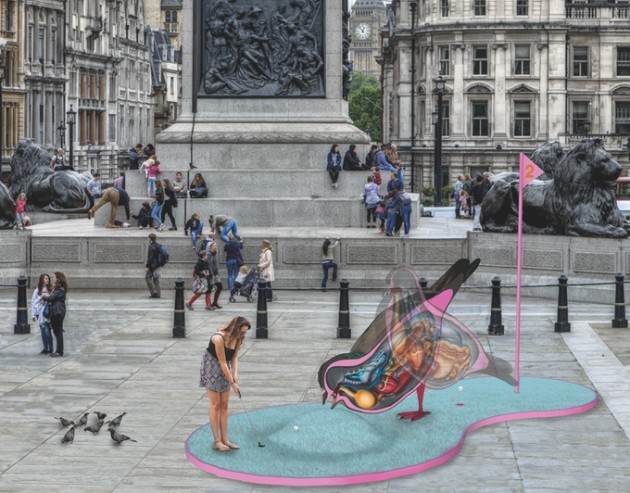 London, UK — On April 25, The London Design Festival launched a Kickstarter campaign to bring Visionary Crazy Golf to London’s Trafalgar Square. Holes have been designed by nine of the world’s most renowned architects, artists and designers. The aim is to raise £120,000 through a 6-week campaign, and the course will be open from September 16-22, coinciding with the Festival itself. 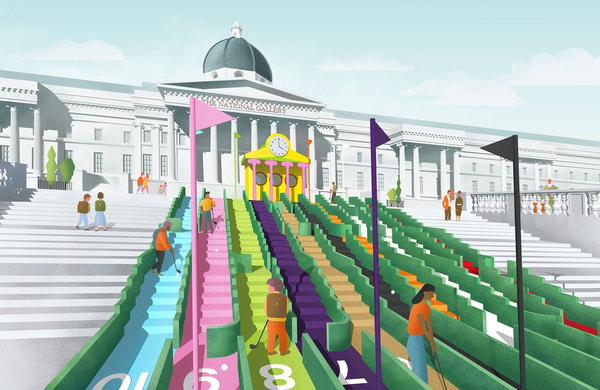 Paul Smith, curator and ambassador for the project, will transform the steps from the National Gallery into a riot of different colored stripes, topped by a neo-classical clubhouse that echoes the museum, but has a turf roof and putters for columns. The late Zaha Hadid designed an undulating course with two levels that traces the shadow of Nelson’s Column. 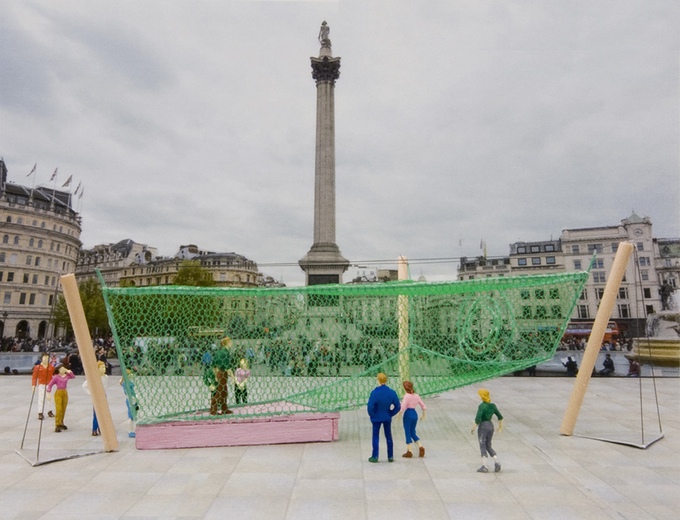 Other holes include Tom Dixon’s, with its funnel and nest of pneumatic tubes through which golf balls will hurtle; a circuitous maze by Mark Wallinger; a netted driving range by the Japanese studio Atelier Bow-Wow; and a cross-section by Ordinary Architecture of a giant pigeon, through whose gut golf balls will travel. 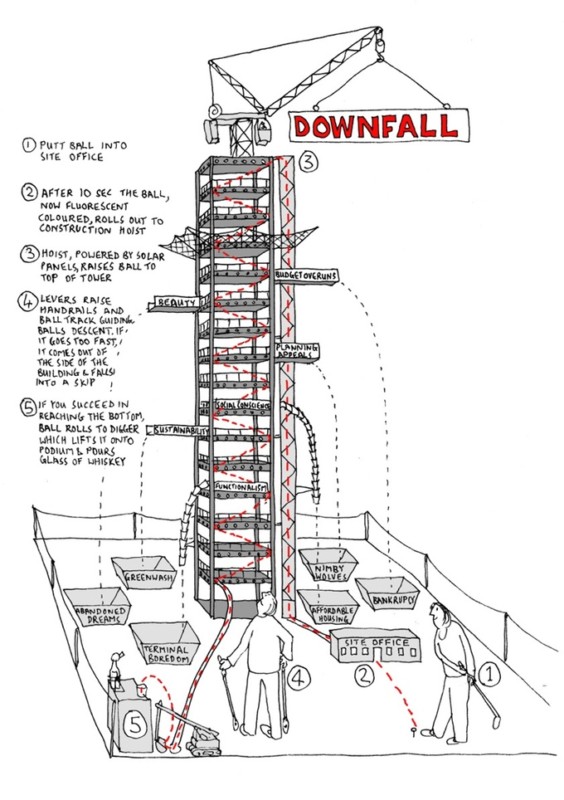 Additional design teams include Camille Walala, HAT Projects with Tim Hunkin, and NEON. Each will create a miniature pavilion that makes an entertaining, playable statement about the future of architecture, filling the square with Pop Art colors and inventive forms that will amuse and inspire both adults and children alike.

For more information or to donate to the Kickstarter campaign, visit https://www.kickstarter.com/projects/londondesignfestival/visionary-crazy-golf-in-trafalgar-square

Joe Kleimanhttp://wwww.themedreality.com
Raised in San Diego on theme parks, zoos, and IMAX films, InPark's Senior Correspondent Joe Kleiman would expand his childhood loves into two decades as a projectionist and theater director within the giant screen industry. In addition to his work in commercial and museum operations, Joe has volunteered his time to animal husbandry at leading facilities in California and Texas and has played a leading management role for a number of performing arts companies. Joe previously served as News Editor and has remained a contributing author to InPark Magazine since 2011. HIs writing has also appeared in Sound & Communications, LF Examiner, Jim Hill Media, The Planetarian, Behind the Thrills, and MiceChat His blog, ThemedReality.com takes an unconventional look at the attractions industry. Follow on twitter @ThemesRenewed Joe lives in Sacramento, California with his wife, dog, and a ghost.
Share
Facebook
Twitter
Linkedin
Email
Print
WhatsApp
Pinterest
ReddIt
Tumblr
Previous articleGiant Screen Films to Uncover Mysteries of China in New Keith Melton Film
Next articleBeauty and the Beast, Big Hero 6, and Soarin’ Joining Tokyo Disney Resort Attraction Portfolio