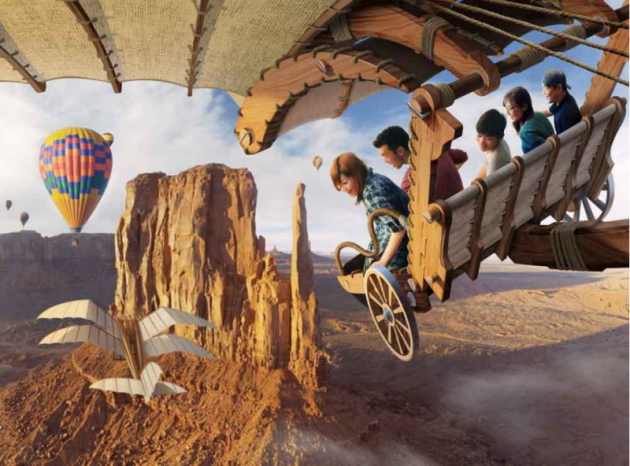 In the 2014 statement, “Oriental Land Co., Ltd. in 2023,” 2023 was set as the target for achieving a constant attendance level of over 30 million Park visitors annually due to sustained Guest satisfaction. Owing in part to the faster-than-expected increase in Park attendance since fiscal year 2014, the target has been brought forward to fiscal year 2020 and a portion of the previously announced investment plan has been reconsidered accordingly.

Through continued investment of about 50 billion Japanese yen annually in the large-scale development of new areas of the Parks and new major attractions, as well as in enhancing the Guest services and facilities, Oriental Land will continue to improve the two Parks in a variety of ways. Tokyo Disneyland and Tokyo DisneySea will continue to evolve with unforgettable theme park experiences that are unlike anywhere else in the world.

Tokyo Disneyland Facilities Development Plan
Grand Circuit Raceway, StarJets and some food facilities and shops currently in Tomorrowland will close permanently to make way for the proposed redevelopment. The expansion of Fantasyland will include a theater for live performances and a new area anchored by a major attraction themed to Beauty and the Beast. In neighboring Tomorrowland and Toontown, a new attraction and a Disney Character greeting facility will be opened in each themed land respectively. Total investment for the development of the new area and facilities is expected to be about 75 billion Japanese yen. In addition, plans are being developed for new versions of current attractions and entertainment programs. 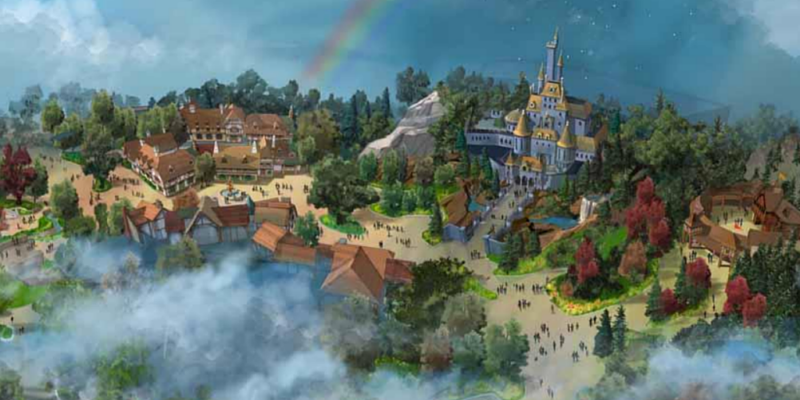 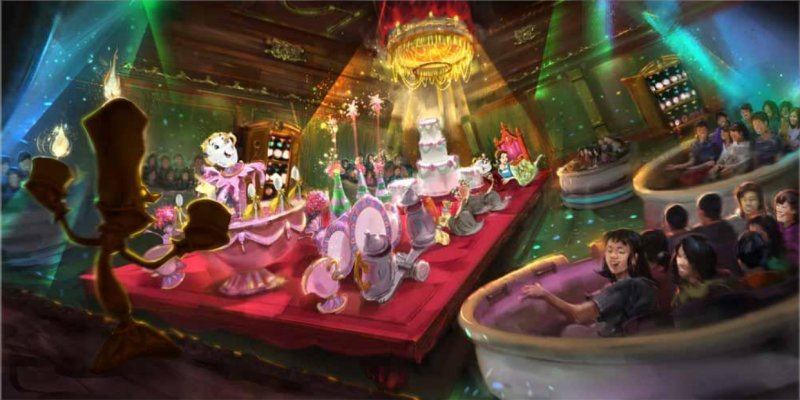 On the ride, guests board enchanted serving dishes that dance in rhythm to the film’s well-known music and follow Belle on a romantic musical adventure inside the enchanted Castle where she dances her way into the heart of the Beast, just in time to break the fateful spell. Guests will feel like they have entered right into the film.
Opening: Spring 2020 (tentative)
Investment Amount: About 32 billion yen (tentative) 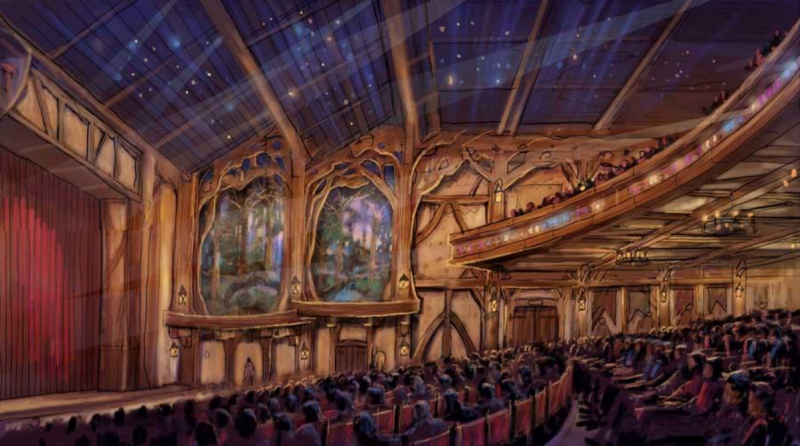 Live Entertainment Theater (Theater name to be determined)
Opening in a new area of Fantasyland, this will be the first full-scale indoor theater for live entertainment at Tokyo Disneyland. Signature Disney entertainment unique to Tokyo Disneyland and featuring the Disney Friends will be presented in this storybook theater environment.
Capacity: About 1,500 persons
Opening: Spring 2020 (tentative)
Investment Amount: About 17 billion yen (tentative) 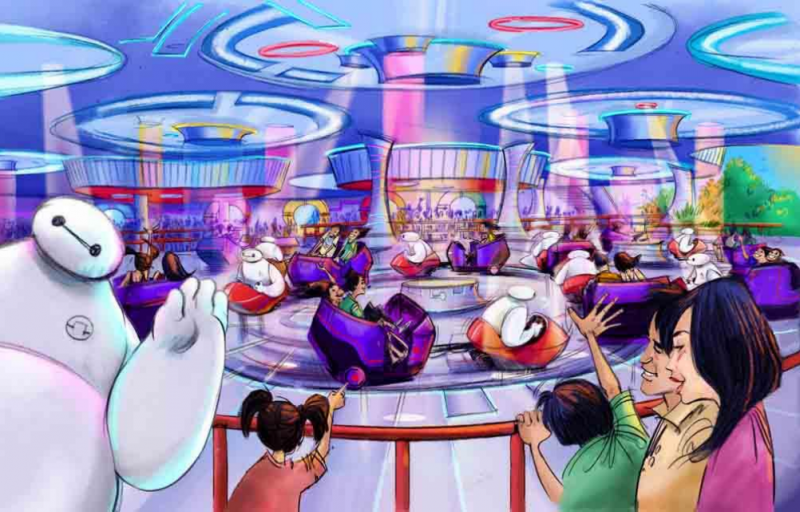 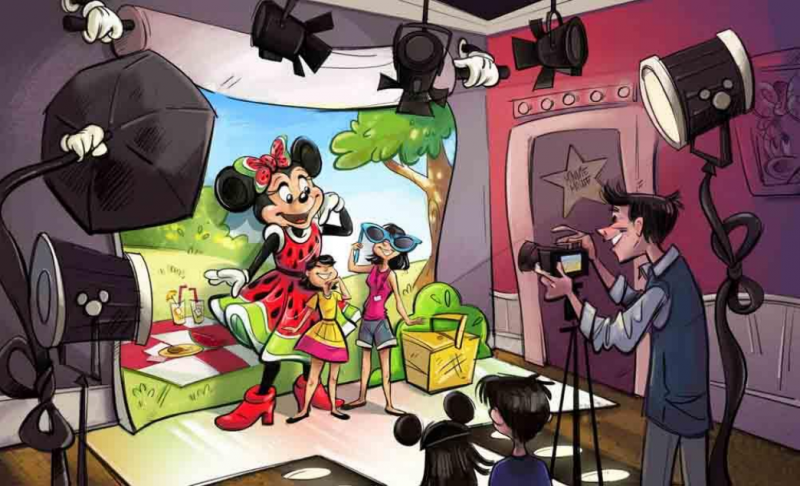 New Disney Character Greeting Facility (Facility name to be determined)
A new Disney Character greeting facility where Guests can meet Minnie Mouse will open in Toontown.  Minnie Mouse, as a fashion designer, will greet Guests in her studio dressed in fashionable costume. After walking through Minnie’s design studio and her work area with interactive elements, Guests can meet Minnie in person, take pictures with her, and generally spend a memorable time together.
Opening: Spring 2020 (tentative)
Investment Amount: About 2 billion yen (tentative)

To make way for the new development areas and the new facilities, the following attractions in
Tomorrowland will close: Grand Circuit Raceway in January 2017 and StarJets in autumn-winter
2017. 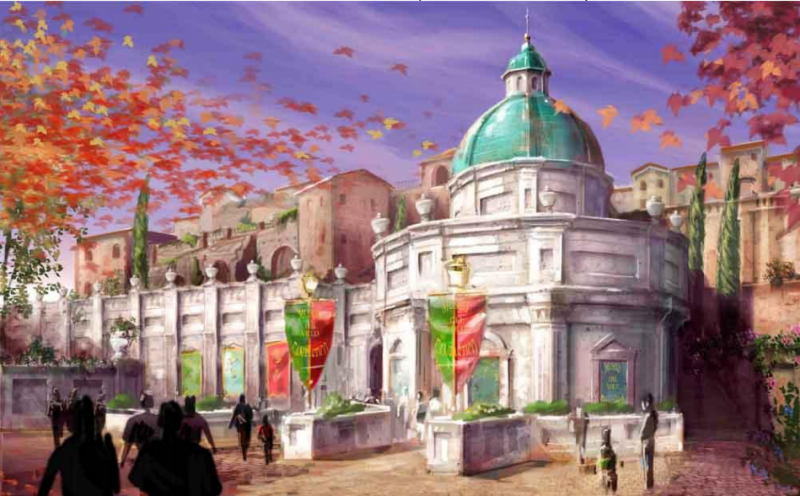 Guests who visit the attraction overlooking Mediterranean Harbor will be able experience a journey soaring over famous landscapes of the world, while feeling the breezes and scents that match the various scenes.
Opening: Fiscal year 2019 (tentative)
Investment Amount: About 18 billion yen (tentative)

Human resource development and maintenance of environments at Tokyo Disneyland and Tokyo DisneySea Parks
Oriental Land will expand the systems to educate and train Cast Members, thus raising their level of knowledge and skills for providing services to Guests, and together with communication measures and enriched award systems, will further promote the creation of work environments where Cast Members can sense their own growth and feel satisfaction in their work. Through these efforts, Cast Members, who play an essential role in Disney parks, will be able to offer Guests an even higher level of hospitality.

In addition to expansion plans for attractions and entertainment programs, other measures will be taken to improve Guest experiences at the Parks shops, restaurants and service facilities.

For Tokyo Disneyland, the new development plans will apply to all seven themed lands, including Fantasyland as mentioned above. An area-based development for each themed land, to take place in stages, is intended to leave a lasting impact on the Park.

The large-scale development plans for Tokyo DisneySea, making use of multiple expansion sites, are meant to achieve a rapid evolution of the only Disney park themed to the sea, and thereby broadly raising the degree of Guest satisfaction from both a qualitative and quantitative standpoint.

In addition, Oriental Land intends to investigate various ways to add more value to Tokyo Disney Resort® as a whole, such as increasing the number of guest rooms at the hotels within the Resort.

Moreover, regarding plans for further growth through new business other than the Tokyo Disney Resort business, Oriental Land will continue planning for a new and separate business segment that is not constrained by a specific timeframe.

Joe Kleimanhttp://wwww.themedreality.com
Raised in San Diego on theme parks, zoos, and IMAX films, Joe Kleiman would expand his childhood loves into two decades as a projectionist and theater director within the giant screen industry. In addition to his work in commercial and museum operations, Joe has volunteered his time to animal husbandry at leading facilities in California and Texas and has played a leading management role for a number of performing arts companies. Joe has been News Editor and contributing author to InPark Magazine since 2011. HIs writing has also appeared in Sound & Communications, LF Examiner, Jim Hill Media, and MiceChat. His blog, ThemedReality.com takes an unconventional look at the attractions industry. Follow on twitter @ThemesRenewed Joe lives in Sacramento, California with his fiancé, two dogs, and a ghost.
Share
Facebook
Twitter
Linkedin
Email
Print
WhatsApp
Pinterest
ReddIt
Tumblr
Previous articleLeading Global Architects Join Forces to Transform London’s Trafalgar Square into Miniature Golf Course
Next articleArtist and Conservationist Guy Harvey to Guide SeaWorld Orlando Guests through Sharks Realm