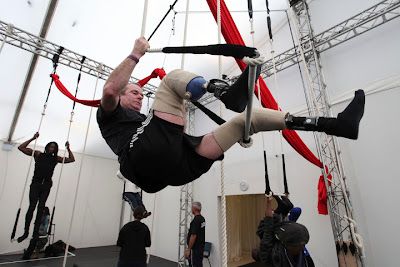 London, England /PRWEB/ — Co-artistic directors Jenny Sealey and Bradley Hemmings outlined their vision for the London 2012 Paralympic Games Opening Ceremony taking place at 8.30pm on the 29 August 2012. Called ‘Enlightenment’, they promise a spectacular celebration of the inspirational spirit of the Paralympic Games that challenges perceptions of human possibility.

Groundbreaking in its inclusivity and innovative staging, the Ceremony will showcase the excellence of deaf and disabled artists and will open with a fly past by ‘Aerobility’, a British charity that trains disabled people to become pilots. The Ceremony promises to be an electrifying celebration to mark the occasion when the Paralympic Games, which originated in the UK as the Stoke Mandeville Games in 1948, will come home.

The programme, which is funded by Arts Council England, will see performers with disability, including established artists and people new to the arts such as rehabilitating soldiers and non competing Paralympians, learn circus arts skills. These new skills will not only to help them with their specialist roles in the Ceremony where they will perform aerial work on a 35m high rig, but also build on these skills after the Games.

The London Organising Committee of the Olympic and Paralympic Games (LOCOG) today confirmed that Barking and Dagenham will host a key rehearsal site for the London 2012 Ceremonies bringing further benefits to the Host Boroughs.

From 19 May the London 2012 Ceremonies crew and cast will move to start rehearsals at the once derelict site in Dagenham, which will now be transformed into a thriving, fully operational rehearsal unit.

The space will replicate the performance area in the Olympic Stadium and will see 110 days of rehearsals take place for all four Ceremonies. The rehearsals will continue right up to the days leading up to the Games whilst the Stadium is prepared for Games-time use.

All of the Host Boroughs are playing their part in the Ceremonies. 3 Mills Studios in Tower Hamlets continues to be the main base for the Ceremonies Team and students from Get Set Network schools in Barking and Dagenham, Greenwich, Hackney, Newham, Tower Hamlets and Waltham Forest taking part as the under 16s Volunteer Performer Cast.

Seb Coe, LOCOG Chair, said: ‘Jenny and Bradley’s spectacular Paralympic Opening Ceremony will be a great showcase of the skills and excellence of disabled artists. The London 2012 Ceremonies are truly global events, with billions of people across the world watching the four shows. This is undoubtedly a fantastic opportunity to showcase talents to the world and I’m delighted that the Host Boroughs have such an important involvement.’

Jenny Sealey, London 2012 Paralympic Games Opening Ceremony Co-Artistic Director, said: ‘Bradley and I are relishing this opportunity of creating our Paralympic Games Opening Ceremony. We are on a rollercoaster of a journey and with us we have an awesome creative team, a wonderful professional cast and an extraordinary team of volunteers. It is immensely exciting and always terrifying especially as the days are passing at the rate of knots. But we will be ready to show the world the story we have so carefully developed and nurtured.’

Bradley Hemmings, London 2012 Paralympic Games Opening Ceremony Co-Artistic Director, said: ‘Jenny and I want our Ceremony to be both spectacular and deeply human at the same time. Having worked together in outdoor theatre over a number of years we’re determined that the Ceremony should speak from the heart, whilst rising to the emotional and historic occasion of the homecoming of the Paralympic Games.’

Sir Philip Craven, IPC President, said: ‘The Opening Ceremony of the Paralympic Games is always a magical occasion and I am extremely impressed at what London 2012 has in store for the global audience.

‘The theme ‘Enlightenment’ is a fitting one as I am sure the cumulative TV audience of 4 billion that will watch the Games, as well as the spectators in the stadiums, will be enlightened by the stunning performances of all 4,200 athletes who take part in London 2012.’

Hugh Robertson, Minister for Sport and the Olympics, said: ‘The UK is the home of Paralympic sport so I want the Opening Ceremony of the Paralympic Games to be a fantastic, inclusive celebration. I know that everyone involved – organisers, performers, artists and school children – will embrace the opportunity to showcase what is best about the UK and the Paralympic movement.’

Stella Manzie, Chief Executive at Barking and Dagenham Council, said: ‘We are thrilled to be playing yet another hugely important part in delivering a brilliantly successful Olympic and Paralympic Games for London. I am delighted that so many of our schools are involved in the Opening and Closing Ceremonies and would particularly like to mention Trinity School which is taking part in the Paralympic Opening Ceremony and is an outstanding special school with a great reputation for performing arts. Hosting the rehearsals site is yet another contribution Barking and Dagenham is making as one of the six Host Boroughs. Not only are we very proud to be the location for so many Games Time Training Venues for Olympic and Paralympic athletes, we’re also really excited about the plans we’re putting together to welcome the Olympic Flame.’

Moira Sinclair, Executive Director of Arts Council England, said: ‘Led by Jenny Sealey and Bradley Hemmings, who we have long considered to be leaders in their fields, the Paralympic Opening Ceremony is an unparalleled opportunity to put the best of British arts on an international stage, to create new audiences and to celebrate the work of our world class Deaf and disabled artists.

‘We are proud to be investing in Jenny and Bradley’s vision and hope that deaf and disabled artists, just like our athletes, will push beyond their personal best to create something truly awe-inspiring. In this way, we believe that the breath-taking arts and cultural events taking place this summer will mean the 2012 Olympic and Paralympic Games will be remembered as much for the beauty and excitement of its cultural experiences as for the sporting victories.’

About Jenny Sealey and Bradley Hemmings:
Jenny Sealey is Artistic Director of Graeae, the UK’s flagship disabled-led theatre company. Jenny directs all productions, including the recent, critically acclaimed Reasons to be Cheerful, occasionally designing productions, too, such as Blasted by Sarah Kane. Spanning 20 years’ working with Deaf and disabled artists, Jenny’s entire career has been dedicated to theatre and performance that challenges what is possible. Passionate in her pursuit of a new dramatic language, Jenny champions and pioneers the ‘aesthetics of access’ (integrating sign language and audio description, diverse physicality and differing voices) to create compelling experiences that are exciting for all the senses and unforgettable for the widest audiences across the globe. In 2009 Jenny was awarded an MBE for services to disability arts.

Bradley Hemmings is Artistic Director of Greenwich+Docklands Festivals (GDF), an organisation with a national and international reputation for creating extraordinary outdoor arts events. At the heart of his work is the annual Greenwich+Docklands International Festival, described by The Guardian as ‘an event whose annual contribution to the happiness of the people of London is unrivalled’. This year’s Festival takes place 21 – 30 June and will feature large scale spectaculars, groundbreaking outdoor performances and the world premiere of Handspring Puppet Company’s production of Ted Hughes’ “Crow”. Under Bradley’s leadership the Festival has championed the creation of exciting new outdoor performance by disabled artists, also regularly showcasing this work at the Liberty Festival, London’s annual festival of disability arts, which GDF produces on behalf of the Mayor of London.

The Worldwide Olympic Partners who support the London 2012 Olympic Games and the National Olympic Committees around the world are Coca-Cola, Acer, Atos, Dow, GE, McDonald’s, Omega, Panasonic, Procter and Gamble, Samsung and Visa.

Joe Kleimanhttp://wwww.themedreality.com
Raised in San Diego on theme parks, zoos, and IMAX films, InPark's Senior Correspondent Joe Kleiman would expand his childhood loves into two decades as a projectionist and theater director within the giant screen industry. In addition to his work in commercial and museum operations, Joe has volunteered his time to animal husbandry at leading facilities in California and Texas and has played a leading management role for a number of performing arts companies. Joe previously served as News Editor and has remained a contributing author to InPark Magazine since 2011. HIs writing has also appeared in Sound & Communications, LF Examiner, Jim Hill Media, The Planetarian, Behind the Thrills, and MiceChat His blog, ThemedReality.com takes an unconventional look at the attractions industry. Follow on twitter @ThemesRenewed Joe lives in Sacramento, California with his wife, dog, and a ghost.
Share
Facebook
Twitter
Linkedin
Email
Print
WhatsApp
Pinterest
ReddIt
Tumblr
Previous article
Black Widow Invades Kennywood’s 115th Year on May 17
Next article
Six Flags Partners with Nokia on Integrated Marketing Campaign