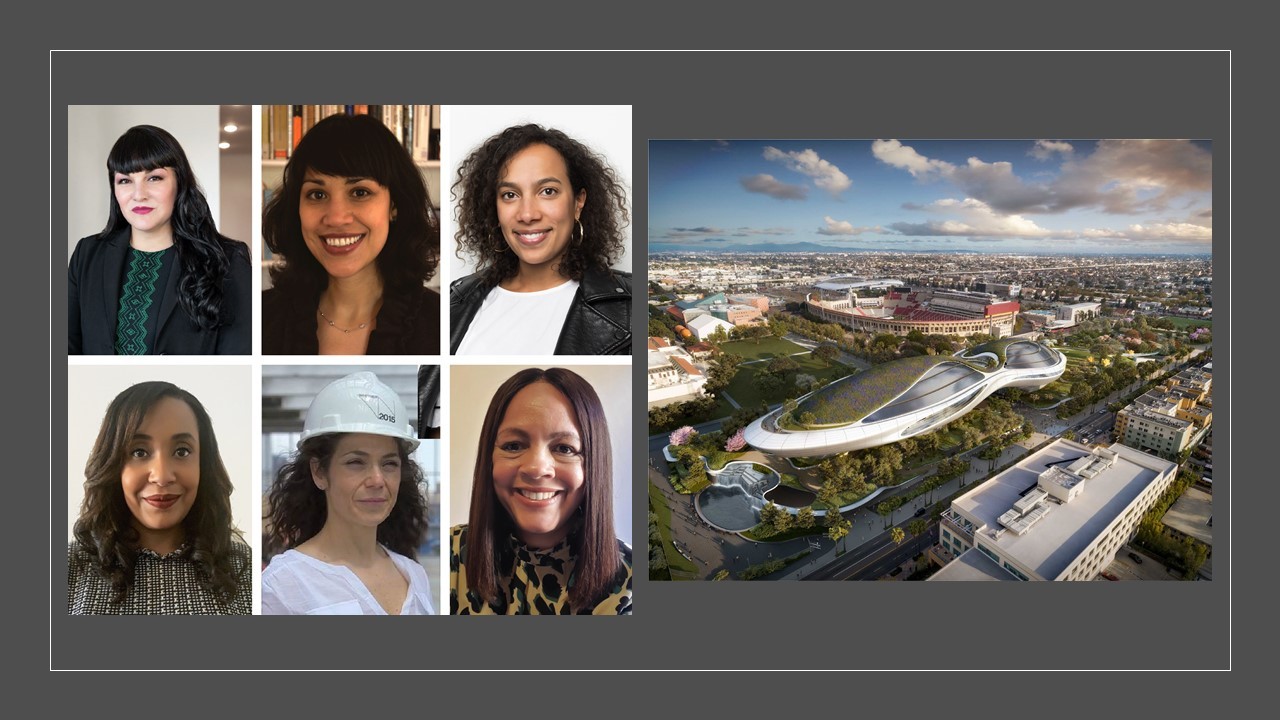 The Lucas Museum of Narrative Art has announced that six accomplished professionals have joined the staff in new leadership positions: Pilar Tompkins Rivas, chief curator and deputy director of curatorial and collections; Nenette Luarca-Shoaf, managing director of learning and engagement; Amanda Hunt, director of public programs and creative practice; Anais Disla, director of special events; Larissa Gentile, managing director of special projects; and Erica Neal, director of computing and infrastructure. These positions will guide critical programmatic and operational areas for the Lucas Museum, which is currently under construction in Los Angeles’s Exposition Park.

“Since I started in January, we have been building the extraordinary physical structure of the Lucas Museum,” said Sandra Jackson-Dumont, director and CEO of the Lucas Museum. “We have also been building the leadership structure that will shape the programs, policies, and practices of this unprecedented institution. As we strive to become a vital source of education, inspiration, and dialogue for our close neighbors around Exposition Park, all the communities of Los Angeles, and people around the world, we could not be more thrilled with the team we have been able to recruit, and we are immensely proud to announce. Their varied points-of-view, individual expertise, and combined decades of experience will help us realize our efforts to expand the role of art and museums for society through visual storytelling.”

Pilar Tompkins Rivas will join the Lucas Museum on July 13 from the Vincent Price Art Museum (VPAM) at East Los Angeles College, where she has served as director and chief curator since 2016. As chief curator and deputy director of curatorial and collections at the Lucas Museum, Tompkins Rivas will provide leadership, strategic direction, and managerial oversight for curatorial, exhibitions, acquisitions, collections management, conservation, archives, and publications. At VPAM she spearheaded partnerships between the museum and the Smithsonian, the Los Angeles County Museum of Art (LACMA), and the Huntington Library, Art Collection and Botanical Gardens, and launched diversity pipeline programs including a museum studies certificate program. Prior to her tenure at VPAM, she served as the coordinator of curatorial initiatives at LACMA, co-directing the institution’s UCLA/LACMA Art History Practicum Initiative and the Andrew W. Mellon Undergraduate Curatorial Fellowship Program in addition to co-curating exhibitions in partnership with the Getty’s Pacific Standard Time: LA/LA initiative. Tompkins Rivas has also served as the curator and director of artist-in-residence programs at the 18th Street Arts Center, the arts project coordinator at the UCLA Chicano Studies Research Center, and the curator of the Claremont Museum of Art. She is completing a Ph.D. in cultural studies and holds an M.A. in cultural studies from Claremont Graduate University, in addition to a B.A. in Latin American studies and a B.F.A. in studio art from the University of Texas at Austin.

“It is an honor to be joining Sandra Jackson-Dumont and the team at the Lucas Museum,” said Tompkins Rivas. “I look forward to contributing to this innovative institution at such an exciting time of its development. I am thrilled to partner with new colleagues to shape how the museum will serve its diverse communities as well as its contributions to the broader field of art history.”

Nenette Luarca-Shoaf is the Lucas Museum’s managing director of learning and engagement where she is charged with establishing a vision for innovative educational and public programs that will foster creativity, inspiration, and civic engagement. She is also tasked with building a team to engage the museum’s diverse constituencies, including adults, K–12 students, educators, scholars, teens, and families. Luarca-Shoaf was previously the director of adult learning and associate curator of interpretation at the Art Institute of Chicago. She has held fellowships at the Universities of Pennsylvania and Minnesota and curatorial and education roles in a number of museums, including the Philadelphia Museum of Art and the Amon Carter Museum of American Art. Luarca-Shoaf holds a Ph.D. in art history from the University of Delaware, and her major area of study is the art and visual culture of the United States.

Amanda Hunt is the director of public programs and creative practice at the Lucas Museum. She came to the Lucas Museum from the Museum of Contemporary Art, Los Angeles (MOCA), where she served as the director of education and senior curator of programs. In her new role, Hunt will devise a roster of programs to bring people into direct and often unlikely engagements with works of art, foregrounding the relationship between creative practice and community engagement. Her past appointments include curatorial roles at The Studio Museum in Harlem and at LAXART, where she helped coordinate the 2012 Pacific Standard Time Public Art and Performance Festival. She also served as co-curator of the 2019 Desert X Biennial in Palm Springs. She earned an M.A. in curatorial practice from California College of the Arts.

Anais Disla is the Lucas Museum’s director of special events, joining the museum from The Metropolitan Museum of Art where she served as the acting head of special events. There she managed a department that produced more than 400 annual events and held the distinction of being the first woman of color to produce the famed Met Gala for the museum. At the Lucas Museum, Disla is responsible for developing and guiding the strategy for all event planning, including future opening events, production, and venue operations. Prior to joining the Met, Disla worked as an event producer and designer for the Light of India Awards, event sales and design manager at Floralia Decorators, and event production director at MME Entertainment. Disla holds a B.A. in philosophy from Stony Brook University.

Larissa Gentile is the Lucas Museum’s managing director of special projects. In this role, she serves as a crucial bridge between the construction team and the museum staff, supporting the development and implementation of the under-construction building. Gentile most recently served as a project manager with Day’s End, working with the Whitney Museum of American Art to realize a permanent large-scale art installation located in New York State’s Hudson River Park. She has also served as the project director for the building of the Whitney Museum of American Art in their current location in downtown New York City. She holds a B.A. in Italian and French from the University at Buffalo.

Erica Neal is the Lucas Museum’s director of computing and infrastructure where she is responsible for overseeing strategy and administration of desktop and mobile computing, network design, and administration of cyber security tools and response. Most recently, Neal served as the senior manager of IS Infrastructure at CALOPTIMA. In her 13 years at CALOPTIMA, Neal held numerous positions from working directly with users supporting networks and telephony systems to designing, building, and managing complex data centers. Neal holds an M.B.A. in technology management from the University of Phoenix and a B.A. in law and society from the University of California, Santa Barbara.

Joe Kleimanhttp://wwww.themedreality.com
Raised in San Diego on theme parks, zoos, and IMAX films, Joe Kleiman would expand his childhood loves into two decades as a projectionist and theater director within the giant screen industry. In addition to his work in commercial and museum operations, Joe has volunteered his time to animal husbandry at leading facilities in California and Texas and has played a leading management role for a number of performing arts companies. Joe has been News Editor and contributing author to InPark Magazine since 2011. HIs writing has also appeared in Sound & Communications, LF Examiner, Jim Hill Media, and MiceChat. His blog, ThemedReality.com takes an unconventional look at the attractions industry. Follow on twitter @ThemesRenewed Joe lives in Sacramento, California with his fiancé, two dogs, and a ghost.
Share
Facebook
Twitter
Linkedin
Email
Print
WhatsApp
Pinterest
ReddIt
Tumblr
Previous articleGiant Screen Films reschedules release of Dinosaurs of Antarctica to February 2021
Next articleKSC Visitor Complex offering two sessions of Virtual Camp KSC designed for elementary-age students