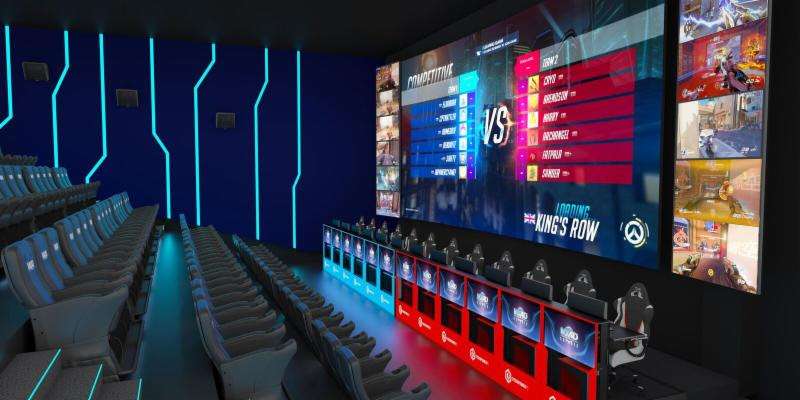 Theatre Box will be the second location to feature the unique cinema design of Hollywood Esports, launched by TCL Chinese Theatres in partnership with MediaMation and Wilshire Consulting. The Hollywood Esports theatre will enable Theatre Box to convert an auditorium between “Cinema Mode” and “Esports Mode” in less than one hour, allowing for the showing of MX4D films and hosting of esports tournaments and events. At 73,000 square feet, Theatre Box houses eight luxury dine-in TCL Chinese Theatres, Sugar Factory American Brasserie restaurant, Sugar Factory café retail and gelato and Chocolate Lounge. Nick Cannon’s Wild ‘N Out Sports Bar and Pitbull’s iLov305 rooftop bar will open in the second phase of Theatre Box.

“TCL Chinese Theatres has been an innovator in the cinema industry for more than 92 years and continues to expand into esports and appeal to an audience of moviegoers and gamers,” said Robert K. Laity, CEO of Hollywood Esports. “We welcome the opportunity to expand with TCL Chinese Theatres into San Diego’s Gaslamp Quarter.”

The Hollywood Esports theatre launching at Theatre Box will incorporate MediaMation’s MX4D motion and special effects technologies, including an innovative package of patent-pending features and gaming hardware that are designed to enable esports and gaming events. As spectators and gamers watch a tournament, a “game jockey” will animate the entire auditorium and spectator seats with motion and special effects in response to the tournament action on the screen. Spectators will enjoy more than a dozen special effects that punctuate exciting moments during game play. A built-in broadcast studio will allow the venue to live-stream events on Twitch, YouTube Live and other streaming platforms to reach an extensive online audience.

“We are thrilled about the addition of a Hollywood Esports MX4D Theatre at Theatre Box,” said Charissa Davidovici, Theatre Box partner. “There are so many university students and military personnel in San Diego, making the city a natural fit for gamers. This is an exciting opportunity for gaming and tournaments. With TwitchCon returning to San Diego this fall and Comic-Con International’s commitment to the city, our new gaming theatre will be the perfect venue to host associated events.”

“Hollywood Esports has built a loyal following of fans, players and spectators who attend weekly events,” said Elie Samaha, Chairman of TCL Chinese Theatres. “We have seen our theatre attract a crowd of more than 100 gaming enthusiasts coming to participate in events on weekday nights. It’s nice to see so many avid fans attend our events to both spectate and play, many of whom are driving more than 30 miles to our theatre.”

“By developing and managing tournaments and events that are scalable across locations, we are creating a network of MX4D Esports Theatres to engage in city rivalries that appeal to the gaming community,” according to Laity. “The gaming and esports events are complementary to the MX4D motion and special effects film business as periods of lower demand for movies are perfect for hosting gaming and esports events to maximize attendance and revenue potential.”

Joe Kleimanhttp://wwww.themedreality.com
Raised in San Diego on theme parks, zoos, and IMAX films, InPark's Senior Correspondent Joe Kleiman would expand his childhood loves into two decades as a projectionist and theater director within the giant screen industry. In addition to his work in commercial and museum operations, Joe has volunteered his time to animal husbandry at leading facilities in California and Texas and has played a leading management role for a number of performing arts companies. Joe previously served as News Editor and has remained a contributing author to InPark Magazine since 2011. HIs writing has also appeared in Sound & Communications, LF Examiner, Jim Hill Media, The Planetarian, Behind the Thrills, and MiceChat His blog, ThemedReality.com takes an unconventional look at the attractions industry. Follow on twitter @ThemesRenewed Joe lives in Sacramento, California with his wife, dog, and a ghost.
Share
Facebook
Twitter
Linkedin
Email
Print
WhatsApp
Pinterest
ReddIt
Tumblr
Previous article
Alterface’s first Popcorn Revenge Erratic Ride opens at Walibi Belgium
Next article
disguise, WorldStage, and ROE showcasing Extended Reality platform at NAB