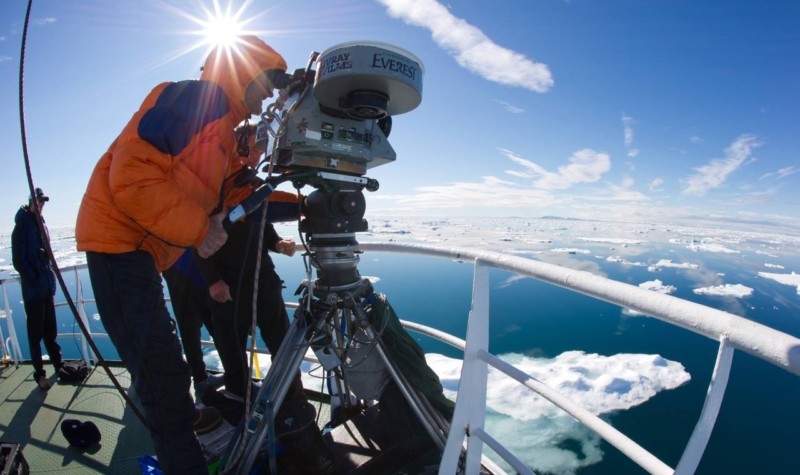 [quote]It delights us to no end that we can celebrate right here in our own backyard with our colleagues and friends.” — Greg MacGillivray[/quote]

Laguna Beach, CA, USA — For 50 years, Orange County filmmaker and giant-screen film producer/director Greg MacGillivray and his team at MacGillivray Freeman Films (MFF) have been making films that surprise and delight audiences.  From the classic surfing documentaries A Cool Wave of Color and Five Summer Stories to collaborations on such Hollywood films as Stanley Kubrick’s The Shining and John Milius’ Big Wednesday to award-winning IMAX films like Everest, The Living Sea and the upcoming Humpback Whales 3D, MFF has created meaningful and memorable movies that have both entertained and educated millions around the world.

In addition to this remarkable milestone, Greg MacGillivray is part of an elite club of filmmakers whose films have cumulatively earned more than $1 billion in ticket sales at the worldwide box office. MacGillivray is the first documentary filmmaker to join this incomparable group.  MFF has also been nominated for two Academy Awards and has won numerous accolades including Best Film of the Year from the Giant Screen Cinema Association.  Throughout its 50 year tenure, the MFF crew has literally traveled to the most remote corners of the globe to bring back stories and images that immerse audiences in places that few will ever experience first-hand.

In celebration of these rare achievements and of 50 years in the filmmaking industry, MFF is proud to participate in the 15th annual Newport Beach Film Festival with two special events and will be honored by the Film Festival with a Lifetime Achievement Award for their work in film.

“When Jim Freeman and I first started making films in the 1960s, our priority was always on quality and finding new ways to take the audience on an unforgettable adventure,” said Greg MacGillivray.  “I’m proud that my team and I have been able to take global audiences on new adventures for 50 years, and that our films have had such a positive impact around the world.”

“Greg MacGillivray and MacGillivray Freeman Films are groundbreaking filmmakers whose presence is legendary in our community,” said Gregg Schwenk, Executive Director of the Festival.  “We are honored to showcase their incredible work at the Newport Beach Film Festival this year and thrilled to celebrate their 50th anniversary which is a truly remarkable milestone in the filmmaking world.”

The first event will take place on April 29th at 5:00pm at South Coast Village Theater with a retrospective screening of Five Summer Stories.  The film represents the culmination of Jim Freeman and Greg MacGillivray’s first decade of making surf films together. A panel discussion will follow with surfing luminariesLaird Hamilton, Gerry Lopez, Herbie Fletcher, Pete Townend, Greg MacGillivray and Steve Pezmanwho will discuss the impact of Five Summer Stories and the dramatic changes in surf culture of the ’70s.

Then on April 30th at 7:30pm at the Regency Lido Theatre, MacGillivray will take audiences on an adventure around the world during a Q&A and a multi-media presentation with film clips and tales from his most memorable filmmaking expeditions, culminating with the Orange County premiere of his newest film Journey to the South Pacific – about a young boy’s adventures amid the islands of West Papua–originally produced for IMAX theatres.  The event will conclude with a presentation of a Lifetime Achievement Award to Greg MacGillivray for his impact in the film community.

Joe Kleimanhttp://wwww.themedreality.com
Raised in San Diego on theme parks, zoos, and IMAX films, InPark's Senior Correspondent Joe Kleiman would expand his childhood loves into two decades as a projectionist and theater director within the giant screen industry. In addition to his work in commercial and museum operations, Joe has volunteered his time to animal husbandry at leading facilities in California and Texas and has played a leading management role for a number of performing arts companies. Joe previously served as News Editor and has remained a contributing author to InPark Magazine since 2011. HIs writing has also appeared in Sound & Communications, LF Examiner, Jim Hill Media, The Planetarian, Behind the Thrills, and MiceChat His blog, ThemedReality.com takes an unconventional look at the attractions industry. Follow on twitter @ThemesRenewed Joe lives in Sacramento, California with his wife, dog, and a ghost.
Share
Facebook
Twitter
Linkedin
Email
Print
WhatsApp
Pinterest
ReddIt
Tumblr
Previous article
Guinness Book Confirms Schlitterbahn Kansas City’s Verrückt as World’s Tallest Waterslide
Next article
Orlando Market Sets All-Time Visitation Record for US Destinations