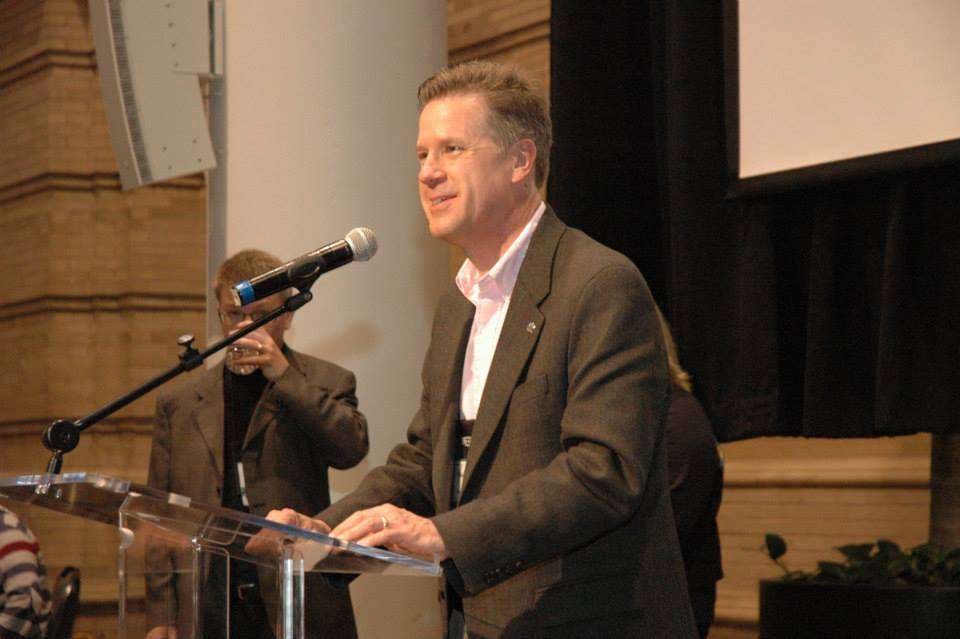 ABOVE PHOTO: Michael Daut speaking at IMERSA Summit 2015 with IMERSA founder Dan Neafus in the background during the big banquet. courtesy IMERSA.

Michael Daut recently joined media-based experience design and production company Mousetrappe as director of business development. Previously, Michael was creative director/marketing director at Evans & Sutherland (E&S), where he’d worked since 1998. In the specialty cinema community, Michael is a familiar face and voice – he serves on the Board of the Giant Screen Cinema Association and co-chairs the GSCA Technical Committee, and is also a Board member of IMERSA. No doubt, his new role and relocation to Los Angeles will make him equally visible in themed entertainment and production circles.

What introduced you to Mousetrappe?

I first met Daren Ulmer [Mousetrappe founder and principal] three years ago, when he gave a presentation at the IMERSA Summit about Mousetrappe’s specialty cinema work for the Space Shuttle Atlantis attraction at Kennedy Space Center Visitor Complex. Daren and I kept in contact, which eventually led to this new working arrangement.

How would you describe Mousetrappe?

Mousetrappe is well-known for their work on big, Disney spectacles, but have a wide variety of capabilities, and know how to give a client great value for the budget. They are a phenomenal organization that creates experiences people want. They value their people, their clients, and the end experience for the audience.

How has your past experience prepared you for your new role at Mousetrappe?

I know the industry, and I know the craft. I’ve built strong industry ties. I understand the grammar of production,
hands-on. My own production credits include more than 20 fulldome shows, plus a set of 4D super-widescreen presentations for a theater in China. I also co-produced an immersive dome attraction for Madame Tussauds in New York City in 2000. I understand what types of things people are working on and what they can do.

What kinds of opportunities will you pursue for Mousetrappe?

There are lots of opportunities for creativity to be applied. I’m a connector, and an exciting part of the position is to match Mousetrappe with people and vice versa who might not be aware that something spectacular is available. High quality and memorable experiences can be in all sorts of places.

This is about finding the right components to tell an immersive story, to reach out to the community and tell them what Mousetrappe can do.

How does your involvement with IMERSA and GSCA help set you up for your new role at Mousetrappe?

Both organizations have helped me learn the priorities and needs of the museum and science center communities. My involvement has helped me be able to see beyond the status quo, visualizing fresh applications for theaters, technology, and content. For example, when planetariums began converting to fulldome theaters, I realized early on that there was much more that planetariums could present than purely astronomical content.

The credo I adopted in those pioneering days of immersive dome experiences, “the dome is bigger than the planetarium,” still holds true today. That’s why one of the early fulldome shows we produced at E&S was a science-fiction “Fantastic Voyage” style race through the human body to save the life of a dying woman. “Microcosm: The Adventure Within” was a breakthrough non-astronomical show for fulldome planetariums, and it was definitely ahead of its time, but now over 15 years later, this show is still being licensed to theaters around the world.

I also realized that audiences in digital dome theaters were going to want to experience more than CGI across the immersive canvas, so E&S became a pioneer in creating a digital transfer of a 1570 film and warping it for proper projection in a dome. E&S completed the first such giant screen film transfer in 2007, and today there are more than 65 digitized films in the E&S library from giant screen producers.

My involvement in IMERSA has focused on connecting experts in various segments of immersive media production, distribution, and exhibition to share experience and knowledge to strengthen and enrich the immersive community.

We’ve heard you do some excellent theatrical voices in a light moment at conferences. Tell us more about your background and interests.

In many ways I guess you could say I grew up onstage. I am a classically trained high-baritone and was studying as a music performance major before I switched to media communications. I also have an extensive background as an actor, and writer, producer, director of live stage productions and short films and documentaries. In St. Louis, where I grew up, I worked at a large church with a 5,000-member congregation for almost 10 years. At E&S, my production output included large-scale trade shows for the company and marketing videos. I love to experiment with new forms of storytelling and create experiences that truly engage and impact audiences emotionally.

Aren’t you something of a theme park geek?

Well that’s an understatement! I cut my teeth at Walt Disney World. This was a frequent spot for our family vacations, and growing up in St. Louis, we also frequented what was then called Six Flags Over Mid-America. Once my wife and I got married we made an annual road trip to Orlando – and two of our three kids caught my deep love of themed entertainment.

There’s something incredible about being seamlessly transported into another world and carried through a layered sense of story that I can’t get enough of. It inspires me and recharges my batteries and keeps me young. When it works, there’s nothing quite like it. When we moved to Salt Lake City, Disneyland became our vacation destination, and we also spent countless hours at Universal Studios Hollywood, Knott’s Berry Farm, and other parks. I guess you can say I’m an EXTREME theme park geek. I’m so thrilled to have this opportunity to contribute toward immersive experiences that other families will be able to treasure for their lifetimes. •

Joe Kleimanhttp://wwww.themedreality.com
Raised in San Diego on theme parks, zoos, and IMAX films, InPark's Senior Correspondent Joe Kleiman would expand his childhood loves into two decades as a projectionist and theater director within the giant screen industry. In addition to his work in commercial and museum operations, Joe has volunteered his time to animal husbandry at leading facilities in California and Texas and has played a leading management role for a number of performing arts companies. Joe previously served as News Editor and has remained a contributing author to InPark Magazine since 2011. HIs writing has also appeared in Sound & Communications, LF Examiner, Jim Hill Media, The Planetarian, Behind the Thrills, and MiceChat His blog, ThemedReality.com takes an unconventional look at the attractions industry. Follow on twitter @ThemesRenewed Joe lives in Sacramento, California with his wife, dog, and a ghost.
Share
Facebook
Twitter
Linkedin
Email
Print
WhatsApp
Pinterest
ReddIt
Tumblr
Previous articleRéalisations-Montréal and Thinkwell Group Enter Into Strategic Partnership
Next articleNol Van Genuchten: Triotech’s showman