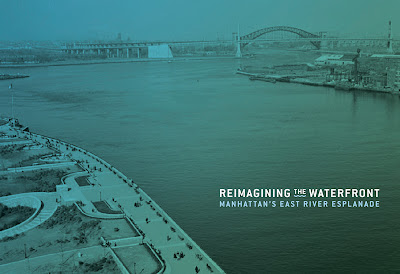 New York, NY, USA (June 26, 2012) /PRWEB/ — The Museum of the City of New York will present a new exhibition that explores potential redesigns of the East River Esplanade, from 60th Street to 125The Street. Reimagining the Waterfront will feature the work of eight architects and urban planners from around the world who participated in a design competition sponsored by CIVITAS in an effort to spur the redevelopment of the deteriorating stretch of parkland on Manhattan’s East Side. The exhibition runs through October 28.

The bold and innovative design proposals featured in Reimagining the Waterfront include concepts ranging from a series of interlocking canals that weave through Harlem and the Upper East Side (Wood), a saltwater estuary created from dredged sediment, a system to engage the public in dialogue about the park’s future via art installations, replacement of the Esplanade’s hard, concrete edge with vegetation and long-lost natural habitats, creation of new activities via modules that move along the riverfront, and park extensions to allow for new uses such as agricultural fields and a bioluminescent bay, and a renewed connection between the Manhattan and Queens waterfronts.

Susan Henshaw Jones, Ronay Menschel Director of the Museum, said “The waterfront is a vital resource for the city and a crucial component in the city’s past, present, and future. This exhibition features designs for the Esplanade that dream big; it allows visitors to explore and imagine what life on the waterfront could be.”

The East River Esplanade suffers from age and deterioration as well as limited planning. The CIVITAS Reimagining the Waterfront: Design-Ideas Competition, launched in the fall of 2011, was developed to incite designers and architects to explore the possibilities for the waterfront, to encourage a sense of community, and to inspire debate about the site’s future. The international competition received over 90 entries from 24 countries.

The design competition was further prompted by several recent developments, including Vision 2020: New York City Comprehensive Waterfront Plan, which seeks to connect the Esplanade with Manhattan’s existing riverfront parks to the south, creating a continuous bike/running path around Manhattan.

On view in the exhibition will be eight winning designs – the top three design proposals and five honorable mentions – featuring a range of ideas including sweeping sidewalks, restored natural shoreline and grand promenades that integrate the waterfront into the city streets. The proposed designs also move beyond the Esplanade as a recreational space and suggest uses for the site that address issues facing the city: rising water levels, access to open space, and preserving the island’s natural ecology. The exhibition will invite visitors to look beyond the existing space and explore a less restricted waterfront.

Felipe Ventegeat, CIVITAS president said, “The exhibition makes an effective case for the historical evolution of the East River waterfront. With every new century it has been reimagined and rebuilt to suit the needs of New Yorkers. We are not endorsing any particular approach in the exhibition, but we want to get creativity and interest flowing in the future of the East River Esplanade. Our hope is that park users from New York and abroad will visit the exhibition, be inspired by the creativity of the many designs on display and then make the short walk to the East River Esplanade. Visitors can then develop their own vision of how they want to improve the Esplanade and share those ideas with CIVITAS and at Museum programs. ”

The exhibition features the work of the following designers and planners:

Reimagining the Waterfront was curated by Andrea Renner, Andrew W. Mellon Postdoctoral Curatorial Fellow at the Museum of the City of New York. The Reimagining the Waterfront: Design-Ideas Competition was sponsored CIVITAS, a nonprofit organization dedicated to improving the quality of life in the Upper East Side and East Harlem, with U.S. Congresswoman Carolyn Maloney, and New York City Council Members Jessica Lappin and Melissa Mark-Viverito.


About CIVITAS
Founded in 1981 to improve the quality of life for residents of both Manhattan’s Upper East Side and East Harlem, CIVITAS is a non-profit organization that has worked successfully to transform the urban environment, advocating for better land use, zoning and urban planning, public access to the waterfront, clean air and water, affordable housing and public transportation. For more information about CIVITAS, visit http://www.civitasnyc.org.

Joe Kleimanhttp://wwww.themedreality.com
Raised in San Diego on theme parks, zoos, and IMAX films, Joe Kleiman would expand his childhood loves into two decades as a projectionist and theater director within the giant screen industry. In addition to his work in commercial and museum operations, Joe has volunteered his time to animal husbandry at leading facilities in California and Texas and has played a leading management role for a number of performing arts companies. Joe has been News Editor and contributing author to InPark Magazine since 2011. HIs writing has also appeared in Sound & Communications, LF Examiner, Jim Hill Media, and MiceChat. His blog, ThemedReality.com takes an unconventional look at the attractions industry. Follow on twitter @ThemesRenewed Joe lives in Sacramento, California with his fiancé, two dogs, and a ghost.
Share
Facebook
Twitter
Linkedin
Email
Print
WhatsApp
Pinterest
ReddIt
Tumblr
Previous articleOrange County Great Park Celebrates Seven Years of Community Fun
Next articleDave Cobb of Thinkwell speaks at Gamification Summit in San Francisco