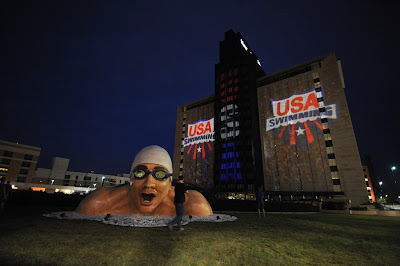 A sponsor of USA Swimming since 2001, Mutual of Omaha commissioned the dazzling six-minute show to celebrate the company’s support of swimming and the community’s enthusiasm for the Olympic Team Trials.

“This spectacular show is the first of its kind promoting an Olympic sport and unlike anything seen before in this area,” said Mutual Senior Vice President John Hildenbiddle. “We are proud of our association with USA Swimming and this is part of our effort to create a positive, memorable atmosphere for Olympic Team Trials athletes and fans.”

The 3D projection mapping show covers the 285-foot-high headquarters building with exciting and colorful images that celebrate the sport of swimming. The animation took more than 450 hours to create.

The six-minute show lights up Mutual of Omaha’s headquarters from 9:30-11:30 p.m. daily through July 2. During that time, Omaha will host both the Olympic Team Swim Trials and the NCAA College World Series.

In addition to the light show, Mutual of Omaha recently installed a sculpture of a giant swimmer emerging from the grounds of the Mutual of Omaha home office complex. The 12-foot tall, 25-foot wide and 16-foot deep swimmer faces one of the city’s busiest thoroughfares.

Mutual of Omaha is a full-service, multi-line organization providing insurance, banking and financial products for individuals, businesses and groups throughout the United States. For more information about Mutual of Omaha, visit www.mutualofomaha.com.

Joe Kleimanhttp://wwww.themedreality.com
Raised in San Diego on theme parks, zoos, and IMAX films, Joe Kleiman would expand his childhood loves into two decades as a projectionist and theater director within the giant screen industry. In addition to his work in commercial and museum operations, Joe has volunteered his time to animal husbandry at leading facilities in California and Texas and has played a leading management role for a number of performing arts companies. Joe has been News Editor and contributing author to InPark Magazine since 2011. HIs writing has also appeared in Sound & Communications, LF Examiner, Jim Hill Media, and MiceChat. His blog, ThemedReality.com takes an unconventional look at the attractions industry. Follow on twitter @ThemesRenewed Joe lives in Sacramento, California with his fiancé, two dogs, and a ghost.
Share
Facebook
Twitter
Linkedin
Email
Print
WhatsApp
Pinterest
ReddIt
Tumblr
Previous articleDiscovery Science Center Named One of Orange County’s Most Trustworthy Brands
Next articleRed Carpet Photos at Disney’s California Adventure