Los Angeles, USA,  – The GW Group produced a complement of special effects for Barnas Brannstasjon (Children’s Fire Station), the newest attraction at regional theme park Kongeparken, in Stavanger, Norway. Barnas Brannstasjon immerses children ages 4-9 in meaningful role-play while teaching principles of fire safety and teamwork in an authentic setting. The attraction opened for the 2011 season. It was completed on a budget of $2.75 million. 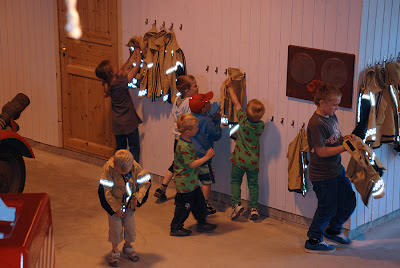 “I was very pleased when Haakon Lund, proprietor of Kongeparken, asked me to contribute to this project,” says GW Group principal George Wiktor, who has been a story design consultant for Kongeparken and for Lund since the park opened about 15 years ago. “Haakon understands the family market. He has a clever and interesting way of creating attractions that blend entertainment, education and storytelling, and has built a successful business drawing about 350,000 annual visits. With Barnas Brannstasjon, Kongeparken has again set a brilliant example of how much can be accomplished on a modest budget with a resourceful team that cares about quality.” 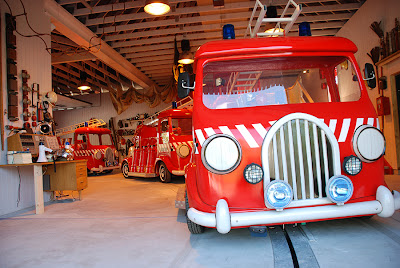 The 20-minute experience begins as a home fire safety briefing that quickly becomes an adventure when a fire emergency call is received and the young park visitors are enlisted to respond. They run across the bridge to the fire station, don firefighter jackets, slide down the pole and then board bright red trucks that rush them to the scene of a simulated fire. There, the children work as a team to pump the water, man the hoses and extinguish the fire. Their success earns them certificates of accomplishment and a home fire safety checklist (which can be submitted later for a gift from the attraction sponsor, a local insurance company).

Parents watch from a gallery as their children take on their roles with gusto. “For the parents it’s powerful – even cathartic – to observe their children’s earnest participation,” says Wiktor. “The kids are very focused on the ‘grown-up’ tasks at hand.” Barnas Brannstasjon accommodates 30 children at a time. 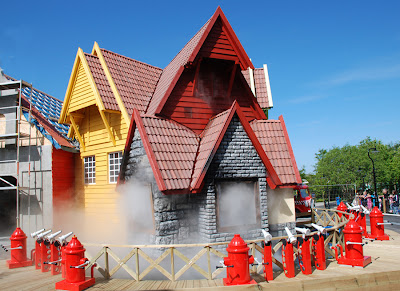 GW Group’s main role was to design and deliver the lighting, smoke, fire and water effects that help make Barnas Brannstasjon feel authentic, and to provide a control system that would be robust and simple for park staff to operate and maintain. It was a cross-continental endeavor: GW Group designed the effects and control package in the US with creative technical partners Visual Terrain (Lisa Green and Steve Young), Kool Fog (Brian Rowe), Sigma Services and Alcorn McBride (Tommy Bridges). Wiktor traveled to Kongeparken to manage installation and commissioning of the system. The $2.75 million budget included everything except land costs; Kongeparken used its in-house resources for facility design, construction, fabrication, AV and purchasing, with Lund as project manager and Wiktor providing some additional consulting. 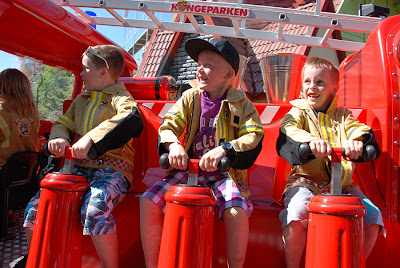 About the GW Group
GW Group principal George Wiktor has been a creative executive at 3 of the top design companies in themed entertainment: BRC Imagination Arts, Thinkwell Group and The Hettema Group. He has some 25 years’ experience in the creation of theme parks, world’s fair pavilions, museums and cultural attractions.

George Wiktor’s project portfolio includes Beyond All Boundaries (National World War II Museum, recipient of a Thea Award in 2010), Die Glaserne Manufakture, Dresden (VW Assembly Plant Visitor Attraction, recipient of a Thea Award in 2003) and Postcards, a 360 Film for the Korean Airlines Pavilion at Taejon Expo 1993. He is a past president of the Themed Entertainment Association.

Wiktor founded the GW Group in 2010 to create world-class experiential attractions in collaboration with owners of museums, visitor centers, theme parks and other projects for entertainment and education. Services include consulting, experience analysis, story development and research, design development, project management and production.

About Kongeparken
Kongeparken (www.kongeparken.no) is a seasonal, family-owned and -operated theme park in Stavanger, Norway. Among the 50-odd attractions at Kongeparken are a chocolate factory, numerous rides and shows, and 4 different themed areas. The park’s signature characters are Bamsekongen, the king (“konge”), Brumle the mischievous bear and Brumle’s girlfriend Brumleline. Kongeparken re-opens in winter for a popular series of Christmas events for families.

Judith Rubin
Judith Rubin ([email protected]) is a leading journalist, publicist, strategist, blogger, content marketing specialist and connector in the international attractions industry. She excels at writing about all aspects of design and technical design, production and project management. Areas of special interest include AV integration and show control, lighting design and acoustics, specialty cinema, digital video and world’s fairs. Judith has ties to numerous industry organizations. From 2005-2020 she ran communications, publications and social media for the Themed Entertainment Association (TEA). In 2013, she was honored with the TEA Service Award. She was development director of IMERSA, and co-chair of the 2014 IMERSA Summit. She was publicist for the Large Format Cinema Association in the 1990s, now part of the Giant Screen Cinema Association (GSCA) and has also contributed to the publications of PLASA, IAAPA and the International Planetarium Society. Already making her mark as a magazine and book editor, Judith joined World’s Fair magazine in 1987, which introduced her to the attractions industry. Launching as a freelancer in the mid 1990s she has contributed to dozens of publications and media outlets including Funworld, Lighting&Sound America, Sound & Communications, Urban Land, The Raconteur and The Planetarian. She joined InPark in 2010. Judith earned a Bachelor of Fine Arts from Pratt Institute. She has lived in New York City and the San Francisco Bay Area, and now makes her home in Saint Louis, where she is active in the local arts and theater community.
Share
Facebook
Twitter
Linkedin
Email
Print
WhatsApp
Pinterest
ReddIt
Tumblr
Previous articleWaukesha County Museum taps designer BRC Imagination Arts & architect Engberg Anderson to revamp museum for Les Paul Exhibit
Next articleMerlin Entertainments brings Madame Tussauds to Sydney May 2012