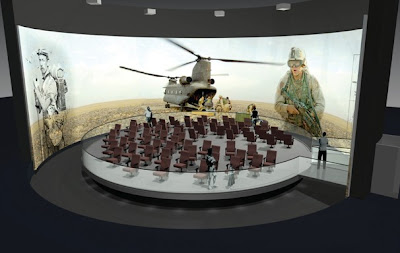 Arlington, VA, USA — The Army Historical Foundation revealed plans for five public spaces to be featured in the National Museum of the United States Army.  The Museum, a permanent tribute that will tell the storied history of America’s oldest and largest service, is expected to open at Fort Belvoir, Va. in 2015 and welcome 750,000 visitors each year. The U.S. Army is the only military service without a national museum.

Each of the public spaces – Army Theater, Education Pavilion, Medal of Honor Garden, Veterans’ Hall, and Wall of Honor – will provide visitors an interactive and engaging experience. These spaces will tell the story of the 30 million men and women who have worn the Army uniform, and forever preserve these Soldiers’ unwavering bravery and commitment to our nation since 1775.

Army Theater
This panoramic theater-in-the-round will engage, educate, inspire, and entertain using a variety of dramatic theatrical techniques. The 360 degree projection display will immerse the audience in an auditory and visual experience as they travel alongside Soldiers from basic training to combat in defense of our nation, and from peacekeeping and humanitarian assistance to the advent of technologies and services that have transformed our daily lives.

Education Pavilion
The Education Pavilion will include an extensive experiential learning area dedicated to the Army’s interest in advancing geography, science, technology, engineering, and mathematics (G-STEM) education programs among students of all ages. The Pavilion will feature classroom space and interactive learning tools such as motion-sensitive smart tables and desk-mounted computers. The space will grow and evolve in tandem with technology, allowing room for future state-of-the-art learning methods to be seamlessly incorporated into the Pavilion’s unique Experiential Learning Center.  Last year, Lockheed Martin Corporation pledged $10 million to sponsor the Pavilion.

Medal of Honor Garden
The Medal of Honor, established by President Lincoln in 1862, recognizes the extraordinary service and sacrifice of recipients of the Army Medal of Honor. The garden, an outdoor rooftop space, will identify and honor the 2,403 Soldiers who to date have received this award, the highest recognition of valor bestowed upon members of the Army. The garden will feature three sections, dedicated to the intrepidity, gallantry, and valor of Medal of Honor recipients.

Veterans’ Hall
The Veterans’ Hall will be a multi-functional space for reunions, meetings, presentations, lectures, and other official events. The Hall will house interactive features such as the Registry of the American Soldier, artifacts, and special exhibits. Veterans’ service organizations and other affinity groups have the opportunity to sponsor the hall, and have their organization’s name permanently displayed on its wall. The Veterans of Foreign Wars and Military Order of the Purple Heart Service Foundation, Inc. were the first two major sponsors of the Hall, each having contributed lead gifts of $500,000.

Wall of Honor (Colors of Courage)
The Wall of Honor will be showcased in the Museum lobby to symbolize and chronicle the history of the 11 major wars the Army has fought in to date.  It will feature replicas of 185 campaign streamers affixed to the Army flag in recognition of the selfless service and courage of our Soldiers.

These public spaces will allow visitors to become active participants in the retelling of the Army’s service.

ABOUT THE ARMY HISTORICAL FOUNDATION
The Army Historical Foundation establishes, assists, and promotes programs and projects which preserve the history of the American Soldier and promote public understanding of and appreciation for the contributions by all components of the U.S. Army and its members.  The Foundation serves as the Army’s official fundraising entity for the Capital Campaign for the National Museum of the United States Army.  The Museum will be constructed at Fort Belvoir, Va., to honor the service and sacrifice of all American Soldiers who have served since the Army’s inception in 1775.  The internationally renowned architectural firm of Skidmore, Owings & Merrill (SOM) is nearing completion of the Museum’s design, while Christopher Chadbourne & Associates (CCA) of Boston has completed the design of the exhibits and galleries. Design and Productions Incorporated of Lorton, Va. will provide fabrication services.  www.armyhistory.org

Joe Kleimanhttp://wwww.themedreality.com
Raised in San Diego on theme parks, zoos, and IMAX films, Joe Kleiman would expand his childhood loves into two decades as a projectionist and theater director within the giant screen industry. In addition to his work in commercial and museum operations, Joe has volunteered his time to animal husbandry at leading facilities in California and Texas and has played a leading management role for a number of performing arts companies. Joe has been News Editor and contributing author to InPark Magazine since 2011. HIs writing has also appeared in Sound & Communications, LF Examiner, Jim Hill Media, and MiceChat. His blog, ThemedReality.com takes an unconventional look at the attractions industry. Follow on twitter @ThemesRenewed Joe lives in Sacramento, California with his fiancé, two dogs, and a ghost.
Share
Facebook
Twitter
Linkedin
Email
Print
WhatsApp
Pinterest
ReddIt
Tumblr
Previous articleJack Hanna Returns to SeaWorld Orlando
Next articleNoah’s Ark, "America’s Largest Water Park," Joins Palace Entertainment Roster