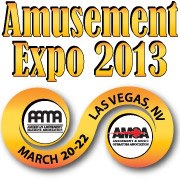 East Brunswick, NJ, USA — Tourist Attractions & Parks Magazine and Foundations Entertainment University will once again recognize those entertainment centers that continue to raise the bar for the industry and exemplify excellence in family entertainment.

Categories for the 2013 Excellence in Family Entertainment Center Awards are:

Eligibility:
New Center must have opened between July 1, 2011 and June 30, 2012 and have been in continuous operation since that time.


Addition/Remodel must have been completed between July 1, 2011 and June 30, 2012 and have been in continuous operation since that time.

Center must be located in North Americas (U.S.A., Mexico and Canada)

You are invited and encouraged to submit your nomination on-line no later than December 15, 2012. A panel of entertainment center professionals will choose the top five nominees in each category and present them for vote to the industry.  Voting will take place in January 2013

To nominate a center for this industry award, go to www.FoundationsUniversity.com and click on the link for 2013 Nominations. More details about the award and the criteria can be found on-line. Questions can be emailed to [email protected].

The top five nominees will receive scholarships to attend Foundations Entertainment University on March 18-19, 2013, which includes admittance to Amusement Expo on March 20-23, 2013.

For Information About Foundations Entertainment University visit, www.FoundationsUniversity.com. For information about Amusement Expo and to Register to Attend, visit www.AmusementExpo.org

Joe Kleimanhttp://wwww.themedreality.com
Raised in San Diego on theme parks, zoos, and IMAX films, InPark's Senior Correspondent Joe Kleiman would expand his childhood loves into two decades as a projectionist and theater director within the giant screen industry. In addition to his work in commercial and museum operations, Joe has volunteered his time to animal husbandry at leading facilities in California and Texas and has played a leading management role for a number of performing arts companies. Joe previously served as News Editor and has remained a contributing author to InPark Magazine since 2011. HIs writing has also appeared in Sound & Communications, LF Examiner, Jim Hill Media, The Planetarian, Behind the Thrills, and MiceChat His blog, ThemedReality.com takes an unconventional look at the attractions industry. Follow on twitter @ThemesRenewed Joe lives in Sacramento, California with his wife, dog, and a ghost.
Share
Facebook
Twitter
Linkedin
Email
Print
WhatsApp
Pinterest
ReddIt
Tumblr
Previous articleAttractions Industry Professionals Raise $81,000 for Give Kids The World with Golf Tournament, Motorcycle Ride, and Fun Run at IAAPA Attractions Expo 2012
Next articleVIDEO: Cirque du Soleil Hits the Vegas Night Club Scene