Not Your Great-Uncle’s Las Vegas 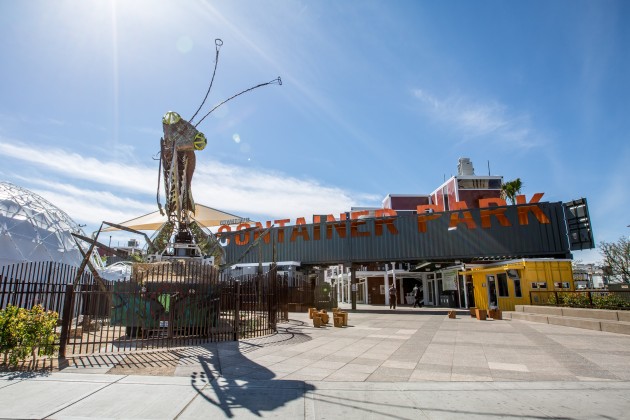 Emblematic new developments on the Las Vegas Strip and Downtown are targeting locals and tourists alike for a widening array of activities. MGM is building up its portfolio of arenas and festival venues. Genting Group of Malaysia and Crown Resorts of Australia are both developing new resort properties. And a group catalyzed by Zappos founder Tony Hsieh is rapidly changing the landscape of downtown with new residential construction, entertainment venues and business incubators.

“Las Vegas is growing up”

On the south portion of the Strip, across from Luxor Resort, lies MGM Resorts Village, a 15-acre site open since September 2013 for festivals and events. Nearby, the area between New York-New York and Monte Carlo is being reborn as “The Park” shopping district and public space that will connect to a new $375 million, 20,000 seat Arena opening in 2016. On the north portion of the Strip, near Sahara Ave., the 33-acre MGM Resorts Festival Grounds is also under development, in partnership with Cirque du Soleil and Rock in Rio. Slated to open in 2015, it will be the permanent site of Rock in Rio, one of the world’s largest music festivals.

How will MGM Resorts Village be utilized in the future?

Our ultimate goal overall will be to utilize this space year-round. We have actively been seeking new programming opportunities for the venue. We recently made major announcements and went on-sale with several shows/festivals.

What aspects of the new Arena improve upon MGM’s existing arena infrastructure, such as the MGM Grand Garden Arena and the Mandalay BayEvents Center?

One improvement you will see in the new Arena is state-of-the-art seating featured in the suites, club seating, etc. The technology in the new building will be state-of-the-art, along with the variety of amenities included. The MGM Grand Garden Arena and our Mandalay BayEvents Center will continue to be utilized for concerts and conventions moving forward.

If you have been to Electric Daisy Carnival, you know there is no competing with it. It is a unique and amazing event all unto itself. It definitely opened my eyes to the overall experience and the sense of community that are created at a festival the size of EDC. The type of music and/or location all feed in to that specific event, but I think there is plenty of room in the market for additional festivals and live events such as those we recently announced.

To what degree do you see the new venues appealing to locals as compared to tourists?

A large number of our venues including the two Arenas, our nightlife outlets, our many restaurants, etc. attract local business. We have a great appreciation for the local community and believe the events we host will continue to be supported by the locals. When we were in the process of developing and creating our strategic plans for these venues we needed to make sure they were appealing to our local residents. We hope they look at these venues as part of the community. Las Vegas is growing up and we want to help in that process.

Genting and Crown come to the Strip 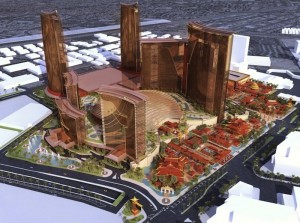 A few blocks south of where MGM Resorts Festival Grounds is under development, two new casinos  are about to be constructed. Both are unique in that they represent the entry onto the Las Vegas Strip of major casino resort operators from the Asia-Pacific region: Genting Group of Malaysia (best known for the Resorts World developments in Malaysia and Singapore), and James Packer’s Crown Resorts of Australia (a partner in Macau’s City of Dreams).

Crown has yet to release specific plans for the former location of the Frontier Hotel and Casino. Partnering with Packer is Andrew Pascal, former president of Wynn Las Vegas and founder of PLAYSTUDIOS, which developed the social media based online gaming system myVEGAS, tied to rewards at MGM Resorts properties. This gives Pascal expertise in both traditional and online gaming.

Genting takes over the unfinished Echelon Place, which was being constructed on the site of the demolished Stardust Casino. Echelon was abandoned shortly after the recession of 2008 and Genting, which in May was awarded a preliminary gaming license by the Gaming Control Board, plans to integrate 80% of the existing Echelon. The new property will be the first major Resorts World brand casino in North America. (Genting has an existing casino at the Aqueduct Racetrack in New York and a planned Miami waterfront resort.) 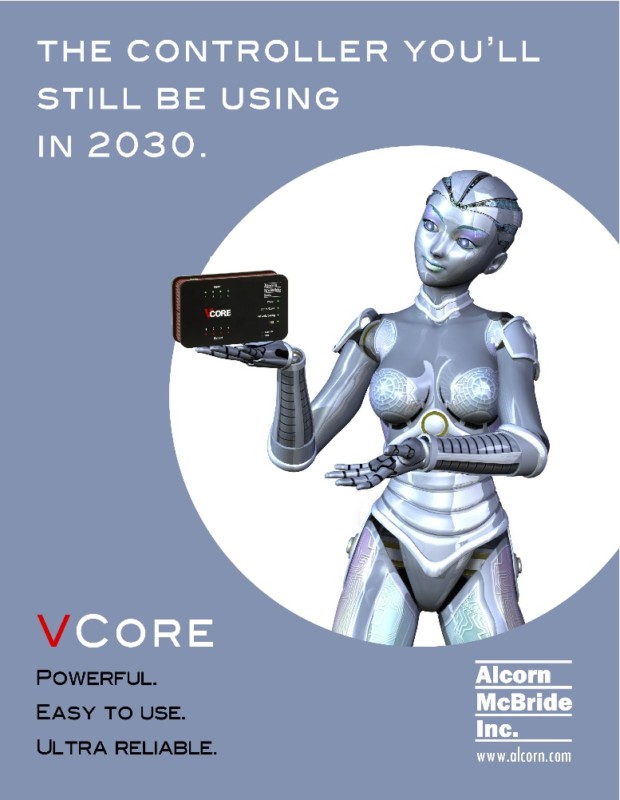 According to the Las Vegas Review-Journal, the initial phase of the $4 billion Genting project “will include 3,000 hotel rooms, a casino with a combined 3,500 slot machines and table games, 30 food and beverage outlets, a 4,000-seat theater and an elaborate garden attraction that will serve as the property’s front door to the Strip… Genting will build a rooftop sky park and observation deck atop the 674-foot-tall tower, whose height already has been approved by the Federal Aviation Administration… Other attractions include a 50,000-square-foot, 58-foot-tall aquarium…”

There are also plans for Genting to add other attractions, which may include a waterpark and potential theme park. Many analysts consider Genting’s theme park partnerships with Universal and 20th Century Fox as evidence for this happening in Las Vegas. Historically, however, theme park type attractions on the Vegas Strip have been a mixed bag, with major ones being removed from the Luxor, MGM Grand, Treasure Island, Sahara, and Caesars Palace within the past two decades. The only remaining full-scale theme park is at Circus Circus, located directly next to the new Genting site.

Genting and Crown are well known in the Asia-Pacific market. Together they mark a major influx of cash from that region into a part of the Strip that had been in decline, which is in turn expected to increase tourist visits from Asia, especially China.

Kim Schaefer, Head of Communications for the 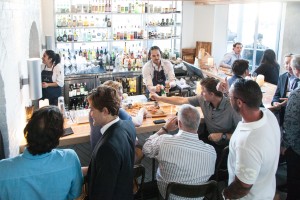 In 2013, Zappos, an online shoe and clothing retailer now owned by Amazon, opened new offices in the former Las Vegas City Hall. With a building interior designed to encourage serendipitous interactions, Zappos founder Tony Hsieh began analyzing how the same unconventional principles could be parlayed to transform a derelict portion of downtown.

Fremont East was the area selected to be invigorated as an interconnected place of living, working and learning. The Fremont East district adjoins the bustling Fremont Street Experience with its downtown casino hotels and overhanging LED screen, and the adjacent Neonopolis shopping center.

The Downtown Project philosophy – based on “three Cs” of Collisions, Co-learning, and Connectedness – is reflected in its community-oriented developments. The Ogden is a residence hotel that provides housing to Zappos employees and guest flats for visiting artists, speakers, investors, and entrepreneurs working with Downtown Project. Its first floor features The Scullery eatery and The Window, a space designed to encourage communication between non-profits and the arts. The Gold Spike, a former casino hotel, has been transformed into an indoor and outdoor lounge where Downtown employees and residents can work or play, and a residence for Zappos or Downtown Project employees. Inspire is a $5.5 million transformation of a commercial building to an intimate performing arts venue featuring a 200-seat theater. Downtown Container Park is a retail center built of recycled shipping containers, to provide space for artists, boutiques, and eateries and an outdoor performance space showcasing both local and national talent.

To what degree might tourists be expected to roam into East Fremont?

Because we are in the really early stages of this revitalization, it’s hard to know. We do see some tourists engaging with the neighborhood, particularly with Downtown Container Park. Those who do make their way to Fremont East will find it’s nothing like the Strip or what most people imagine when they think of Las Vegas. It’s a place where small business owners hang out in each other’s bars, restaurants, and shops. They support one another. It’s a neighborhood where people are open, friendly, and welcoming.

What have been chief sources of inspiration?

A great deal of the work we’re doing has been inspired by the book “Triumph of the City” by Harvard economist Edward Glaeser. Glaeser studied the history of cities throughout the evolution of civilization and found that cities, places where people live and work closely together, can make people happier, healthier, more innovative, more successful.

We’ve also been inspired a good deal by Austin, Texas. The mixture of technology companies, creatives, live music, and entrepreneurs is a mix that we are hoping to encourage to happen here.

Tell us about what the project has invested in so far.

Downtown Project is an initial $350 million investment in helping to revitalize Downtown Las Vegas through $50 million in investments in small businesses; $50 million in tech startups through the VegasTechFund; $50 million in arts, culture, and education; and $200 million in real estate and development. We have invested in 117 small businesses and tech startups over the last 2.5 years including restaurants, bars, shopping, retail, live music venues. We’re invested in a monthly arts festival called First Friday that attracts 25,000 people to Downtown each month. We’ve also invested in a private school, 9th Bridge, that is currently an early childhood education school through kindergarten. We are still very early in our efforts, but we’ve created 707 direct jobs through those investments along with helping to attract people to Downtown to become emotionally, personally invested in the neighborhood’s long term sustainability. • • •

Joe Kleimanhttp://wwww.themedreality.com
Raised in San Diego on theme parks, zoos, and IMAX films, InPark's Senior Correspondent Joe Kleiman would expand his childhood loves into two decades as a projectionist and theater director within the giant screen industry. In addition to his work in commercial and museum operations, Joe has volunteered his time to animal husbandry at leading facilities in California and Texas and has played a leading management role for a number of performing arts companies. Joe previously served as News Editor and has remained a contributing author to InPark Magazine since 2011. HIs writing has also appeared in Sound & Communications, LF Examiner, Jim Hill Media, The Planetarian, Behind the Thrills, and MiceChat His blog, ThemedReality.com takes an unconventional look at the attractions industry. Follow on twitter @ThemesRenewed Joe lives in Sacramento, California with his wife, dog, and a ghost.
Share
Facebook
Twitter
Linkedin
Email
Print
WhatsApp
Pinterest
ReddIt
Tumblr
Previous articleBuilding Bridges
Next articleMyMagic+ technology changes Disney parks