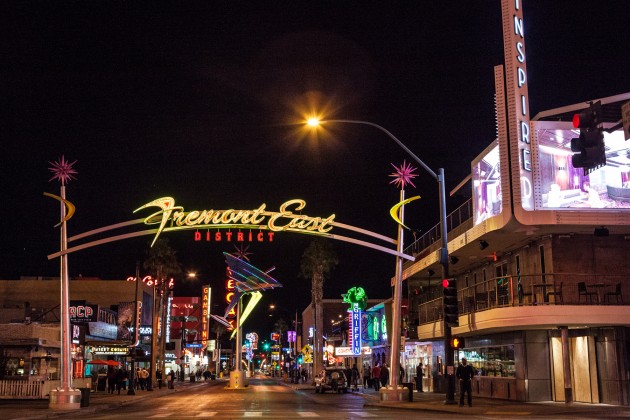 Dedicated to raising the tech bar in themed entertainment, Tommy Bridges brings in solutions from nightclubs and enterprise

Where creative design, AV integration and show control come together in a state-of-the-art visitor attraction, you may well find it’s a project that Tommy Bridges – Executive VP of All Things Integrated, (ATI) and member of the Themed Entertainment Association (TEA) International Board – has touched.

New tools and solutions migrate into themed entertainment from other sectors, helped by innovative tech specialists, such as Bridges, a well-known figure who cares deeply about the industry that’s been his field for 27 years.

Bridges has helped lead significant advances in video for the attractions industry, such as projection mapping. But currently, he perceives the business as overdue for an upgrade in audio – with nightclubs setting the example. And, he sees the time as ripe to move away from PC-based systems to enterprise solutions and cloud storage, making cozy bedfellows of show control and IT.

With Tommy as our guide and Las Vegas our setting, we looked at recent ATI installations and spoke with two frequent collaborators: show control specialists Smart Monkeys and Medialon, to glimpse the future of electronic design.

As Las Vegas courts the Millennials and their penchant for clubbing and concerts, Las Vegas based ATI has been busy providing top-end AV systems to high-profile nightclubs, “dayclubs,” restaurants, retail, and outdoor stages for casinos and other developments downtown and on the Strip. Within the Downtown Project spearheaded by Zappos founder Tony Hsieh (see p. 24 of this issue) recent ATI installations include Inspire Theatre, The Scullery and the Container Park. On the Strip, recent ATI installations can be found at Hard Rock Hotel and Casino Las Vegas (Body English, Vanity, the Vinyl live music venue, and the widescreen digital signage behind the check-in counter), at Caesars’ The LINQ (FAME Asian Fusion and The Style Lounge hair salon), and Paris (Chateau, Sugar Factory). 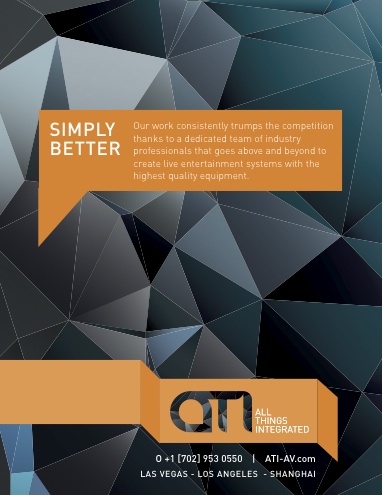 “People in the nightclub business know how important good sound design is and that understanding along with their skillset and equipment knowledge are assets they can bring to themed entertainment projects,” says Bridges. He’s a man with a well-developed ear, and he knows nightclubs as well as he knows themed entertainment. A professional jazz musician since his youth and still active on the performing and recording circuit today, Bridges pursued both music and AV tracks in his education and career. “I was lucky to have studied with some of the music industry’s best early on – not just in recording studios – and with some real jazz legends including Milt Hinton, Doc Cheatham and Wild Bill Davison. Then at college at Syracuse University, I was getting business advice from guys like Cy Leslie, Chairman of MGM/UA, John Sykes founder of VH1 and Stanley Gordikov, the President of the RIAA, the parent organization of the Grammy awards. These were top music industry executives in Hollywood,” said Bridges.

Bridges recorded his first vinyl album at age 14, on the Delmark jazz label in Chicago (at Gary Hedden’s studio). In 2003, he released what has been lauded as the first-ever traditional jazz music CD recorded in 96K/24bit resolution. “It was definitely on the cutting edge back then and was a technological feat, as we had perfect separation in the way I set the studio up.”

His big break in electronics came in 1987 at Univisions video systems in Syracuse, selling GE Talaria “Light Valve” projectors, Barco and Electrohome projectors, and then-new Sharpvision (for home and classroom) and Kodak classroom LCD units. “This is all ancient technology by today’s standards! We were the king of the hill of large screen projection, in upstate New York at the time. We did this all long before anyone ever heard of Christie Digital!”

Tommy Bridges and Bob Athey met on a project supplying a custom audio player for the Hard Rock Hotel suites. At the time, Bridges was with Alcorn McBride, and Athey was with FBP Systems. A few years later, in 2011, Athey founded ATI. Bridges was with General Projection Systems at the time, and attracted a lot of attention on the IAAPA show floor with a breakthrough example of projection mapping. “We collaborated with Christie Digital, and Adam Neale’s then-new product, the Delta Nano 2K player from 7th Sense. It was a big hit! Bob Athey really liked it, and we decided to get together soon after. Bridges joined ATI in late 2011. The firm will soon open an office in Orlando. 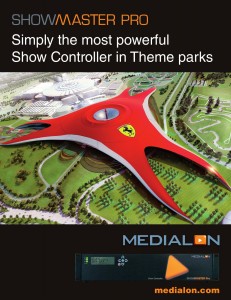 For theme parks, Bridges forecasts multiple applications of the kind of sophisticated audio ATI puts into its Vegas venues – including background music, rides, retail and restaurant spaces and media-based attractions. “These are systems that sound better and cleaner and produce less fatigue on the ear,” he said. He cites robust new technologies such as high-resolution audio files that provide the ability to capture at a higher bit rate for mixing, steerable line arrays that combined with computer modeling enable the creation of quiet zones and support outdoor amplification that doesn’t bother the neighbors, better speakers and better speaker placement strategies. “Both Boomers and Millennials are demanding better aural environments, whether for clubbing or for socializing in a family group. Theme parks should take note and kick up the guest experience accordingly. Audio integration should help drive design.”

“Because of Tommy and Bob, ATI is an integrator pushing technology to the next level,” says Stephan Villet, co-founder of Smart Monkeys, whose new ISAAC system is one of the products that ATI is currently marketing to transform show control in the attractions sector. “Tommy opens doors for us. He was one of the first to grasp what we were doing and find ways it can be applied.”

The first ISAAC system, built for the new Tom Bradley International Terminal at LAX, has been getting a great deal of notice. Passenger Terminal Conference 2014 in Barcelona showcased Villet presenting “Integrating immersive media systems to create an intelligent airport environment.” In Las Vegas, Villet spoke about the system to John Huntington’s annual Geekout, an elite show control gathering during InfoComm. As of June, LAWA (Los Angeles World Airports) reported that the system had been honored with 10 awards and was in the running for six more. The accolades have come in from SEGD Global Design Awards, South By South West (SXSW) Interactive Awards, Live Design Excellence Awards, the InAVation Awards and others.

In the Bradley terminal, the ISAAC system is integral to the built environment, using some 12,000 square feet of LED tiles, hundreds of LCD screens, and some 60 ultra-high-resolution multimedia productions. It displays more than four hours of original, high-resolution, multimedia content in seven display areas (adding up to some 9,600 square feet of combined active display area), synchronizing multiple features based on intelligence from live data, including flight departure and arrival information, and passenger interactions. 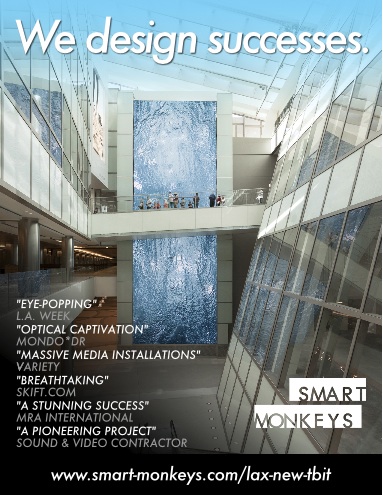 Along with state-of-the-art content management, ISAAC delivers what Villet calls “the holy grail of resiliency,” by replicating the advantages of networked PCs without the actual PCs and their accompanying instabilities. The PCs exist virtually, in a cloud-based “virtualization cluster,” on a robust, industrial hardware platform. Broadcast-grade Grass Valley servers and Moment Factory’s X-Agora software are used for content playback. Medialon software, the show controller, runs within ISAAC. The whole rig takes less space and consumes less power than conventional PC-based systems. The system automatically monitors itself and should a hardware component fail, the others step up to accommodate the task.

Centralization of control and of data/content streams let the operator reap the rewards of big data, streamline processes and offer the kind of personalization expected by (you guessed it) Millennials. And, according to Villet, operators connected to corporations will find that IT departments readily relate to ISAAC.

“The people who understand what software really can do are often brought on too late to have a specific impact on the design itself,” said Villet. “But, because of the greater importance of software and show control in general, designers and concept creators should consider hiring the show control specialist right from the beginning. Then, the design itself will incorporate all the benefits of what the software can provide.”

Where there’s themed entertainment, there’s Medialon, a leading supplier of control software. Medialon’s North America Sales Manager Eric Cantrell talked about the company’s collaborative relationship with Bridges. “We share ideas about technologies we see emerging. Tommy has a holistic view of the markets and the possibilities and is always on the lookout: he wants to do the next thing, to push the technology. We build a product to do one thing – Tommy gets a flash of inspiration and comes back with, ‘Can you do it this way?’ and the dialog changes.”

The professional music connection emerges again in the conversation about Medialon. Bridges explained that the product is popular for shows that contain live performance elements. Its visualization of the timeline and the ability to manipulate things quickly using drag-and-drop make it extremely flexible and accommodating to changes on the fly, and are similar to the Pro Tools interface that is very familiar to people with a music industry background.

Cantrell described a newer Medialon product, that ties into BYOD (bring your own device) applications, personalization, tracking and data collection:

Bluetooth Low Energy (BLE) beacons are small, battery-powered devices that transmit a signal, “kind of like a miniature GPS satellite,” said Cantrell. Receiving devices – smartphones, for instance – can pick up on this beacon signal, and an app in the phone can then react to the beacon to contact a website, receive content, or even trigger an action in a show control system. Apple calls its implementation of this technology “iBeacon.” (Still in early stages of deployment, iBeacons are currently in use at all Apple stores.) Cantrell explained that in a museum or retail outlet, iBeacons can be the means of delivering context-specific content (such as audio tours or product coupons) to visitors, micro-locating them inside their facility. In a theme park, iBeacons can be used for micro-location to track visitors playing a parkwide game overlay or augmented reality experience, or a countdown to boarding a ride. Range of operation can be limited for security purposes so that, for instance, when a guest leaves the facility, the signal is no longer picked up by smartphones. This allows developers to create apps that behave differently when in the presence of iBeacons than they do when the user is at home.

All this feeds back into a bigger way of thinking about show control, so that in fact it transcends that category into a much larger, enterprise-wide role in a project. “ISAAC is something for the entire industry to watch as an example of what we call a ‘supervisory system’ and what it can do,” said Cantrell. “In a supervisory system, statuses and errors can be reported not only on the local user interface at each exhibit or attraction, but also appear in a system-wide status screen, daily report, and daily log, or even send text messages or email alerts to appropriate on-duty staff. A supervisory system such as ISAAC allows access control, raw data management, and reporting tools to be separated from the individual show control systems, reducing the amount of programming in each show controller.”

Bridges, Villett & Cantrell all make the case for implementing this kind of integrated supervisory system at the outset of a project. “Working with an architect, this is something that can be designed from the start, planning a smart building from the ground up,” said Cantrell.

“As museum and theme park AV systems become more and more networked, supervision and management of AV assets can take advantage of that network infrastructure,” said Bridges. “ATI, Medialon, and Smart Monkeys all recognize that. It’s at the heart of our collaboration.” • • •