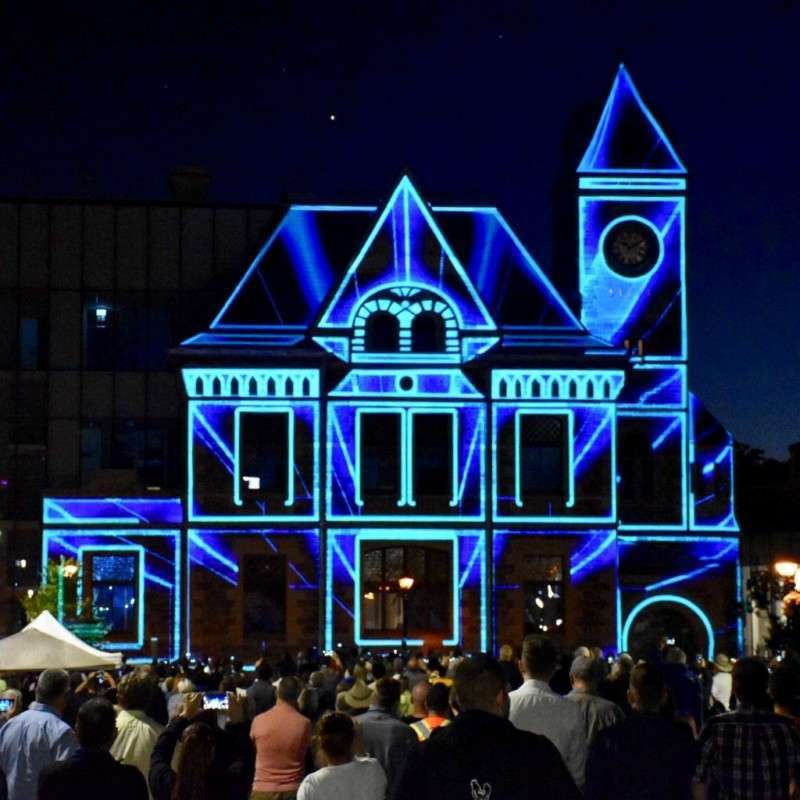 The City of Cambridge, Ontario, has brought a 20-minute projection mapping show to its downtown core, delivered by Westbury National services and Christie® technology. To celebrate the reopening of the former Galt Post Office as a digital library, Westbury National was tasked with designing the projection mapping content and installation of this permanent attraction.

The process began in late 2016 as the City and Westbury began work on a permanent installation to projection map the façade of the Galt Post Office – what would become the City’s new digital library. John Coniglio, senior account representative, Westbury National, has been at the helm of the project from day one, including directing the content creation. “I had a vision of what I wanted to accomplish with content, having been involved with many projection mapping projects. I really wanted to ensure we met the client’s needs and created a showpiece.

Creating such a dramatic piece of public art is no small feat, and Coniglio knew Christie technology was up to the demands of a permanent installation. Westbury installed four Christie Boxer 2K30 projectors and a Christie Pandoras Box media server. “We’ve worked with the Boxers before. We did another permanent installation of 18 Boxers for the Colorado Avalanche, and we wanted to continue that product choice because we knew we could rely on it,” says Coniglio. Westbury also used Christie Pandoras Box with the Avalanche, and its track record of stability and ease of use was something that Westbury could depend on for this installation. Christie Pandoras Box media servers enable real-time video processing and show control, including a true 3D compositing space to align objects and plane environments for projection mapping or real-time 3D playback. 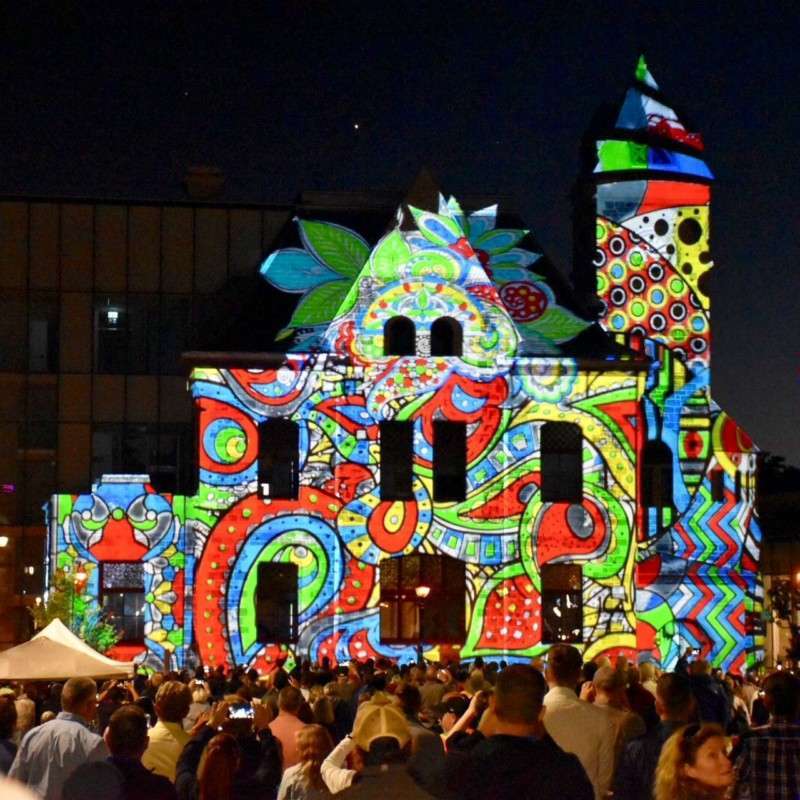 Coniglio notes serviceability was another key factor in their choice. “Christie provides Westbury with amazing support allowing Westbury to offer the same level of service to our clients that are purchasing high tech projects like this. Location of the manufacturer is key. The fact that the installation is in Cambridge was an added bonus as support from Christie was only half an hour away.” Christie’s engineering and design centre is located in Kitchener, Ontario, north of Cambridge.

Projector placement was the biggest challenge of this permanent installation. With only a parking lot across from the new Digital Library, there wasn’t a building where projectors could be installed. Westbury worked with the City to design an appropriate structure and assisted with contracting the installation of a concrete pad for the structure. Once the structure was completed and erected on to the concrete pad, the custom projector enclosures were lifted 16 feet to the final resting placement on the structure, complete with electrical.  Coniglio notes that, in the end, “it was a straightforward installation.”

The show went live on July 6, 2018, and the response has been outstanding. “Technology wise, Westbury is very good at what we do, so we were confident we could get the projection system up and running. Content-wise, when showing the content committee some of the first drafts, their first reactions were “yes, you guys got it.” That was the biggest compliment because it proved we understood their vision and translated it to the projection mapping show,” says Coniglio.

Undertaking this project required a team effort from Westbury National, from installing the projectors, to creating the original content that’s projected during the 20 minute show.  Says Coniglio, “I can’t do what I do without a great team. And that team consists of great projectionists, great content creators, and being able to deliver on-time and on-schedule.” Westbury National team members included Doug Wildeboer, Guy Wallace, Kevin Mifflin, Andrew (Ziggy) Cwierdcinski, Tim Harrington, David Eva and Dean Bayley.

Joe Kleimanhttp://wwww.themedreality.com
Raised in San Diego on theme parks, zoos, and IMAX films, InPark's Senior Correspondent Joe Kleiman would expand his childhood loves into two decades as a projectionist and theater director within the giant screen industry. In addition to his work in commercial and museum operations, Joe has volunteered his time to animal husbandry at leading facilities in California and Texas and has played a leading management role for a number of performing arts companies. Joe previously served as News Editor and has remained a contributing author to InPark Magazine since 2011. HIs writing has also appeared in Sound & Communications, LF Examiner, Jim Hill Media, The Planetarian, Behind the Thrills, and MiceChat His blog, ThemedReality.com takes an unconventional look at the attractions industry. Follow on twitter @ThemesRenewed Joe lives in Sacramento, California with his wife, dog, and a ghost.
Share
Facebook
Twitter
Linkedin
Email
Print
WhatsApp
Pinterest
ReddIt
Tumblr
Previous articleInaugural group of TEA Masters named; honors to be bestowed during SATE Orlando 2018
Next articleAVIXA predicts global professional AV industry will grow to $230 billion in next five years