One System to Run it All 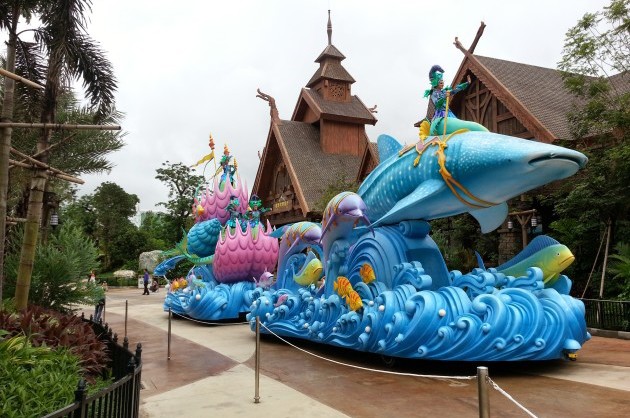 [dropcap color=”#888″ type=”square”]T[/dropcap]o meet the challenge of large crowds in one of Asia’s largest parks, Chimelong Ocean Kingdom enlisted FUNA to create a single multi-purpose park-wide sound system that provides background music, controls audio for a nighttime lagoon show and the largest parade route in a theme park, and handles park-wide paging services. Because of the challenge inherent with the length of the parade route, FUNA developed a unique automated audio system linking floats with land-based speakers as part of the project.

The audio system at Ocean Kingdom as a whole is composed of a number of small, individual parts that could conceivably act as their own individual sound zones – what Scott Arnold, Vice President Design & Engineering of FUNA International, Inc. calls “granular.” Together they form a single cohesive audio system. “We can make a large venue into a single audio zone or break it into multiple zones,” elaborates Arnold. Within the park, an entire restaurant might be considered a single audio zone, while the stores on Ocean Avenue (the park’s main entrance thoroughfare with an overhead LED canopy) are set up with multiple zones, allowing for audio to blend as one walks between stores. Zones are also determined by the theme of the area.

“Throughout the park, everything talks to everything,” says Arnold, referring to all the various components of the system. “There’s a main brain running the entire park, then each different audio aspect has its own brain communicating with the main brain.”

At the center of the park lies a large lagoon, known as Hengqin Ocean. During the day, the lagoon is encircled by a parade. At night, it hosts a show called “Glorious Sky Over Hengquin,” featuring large scale fountains, lighting and projection effects, audio, fireworks, and stunt performances. Traditional installations may have separate speakers set aside for the parade and lagoon show. In Ocean Kingdom, FUNA devised a way to integrate all the audio needs into a single system.

FUNA’s approach to Ocean Kingdom was based on their work on audio and other systems not just for other entertainment projects, but also for more than 100 cruise ships. According to Arnold, “Ships have many similarities and some differences from a theme park park-wide audio system. Ships require significant zoned audio and paging systems just like theme parks. While the level of redundancy for ships is higher due to safety and regulatory restrictions, theme parks still require a certain level of redundancy. Both ships and theme parks have cost and space limitations of varying degrees. Since this was a new project being built from the ground up, we were able to take the same approach that we have with the some of the ships we have worked on, with a single system providing multiple functions.” 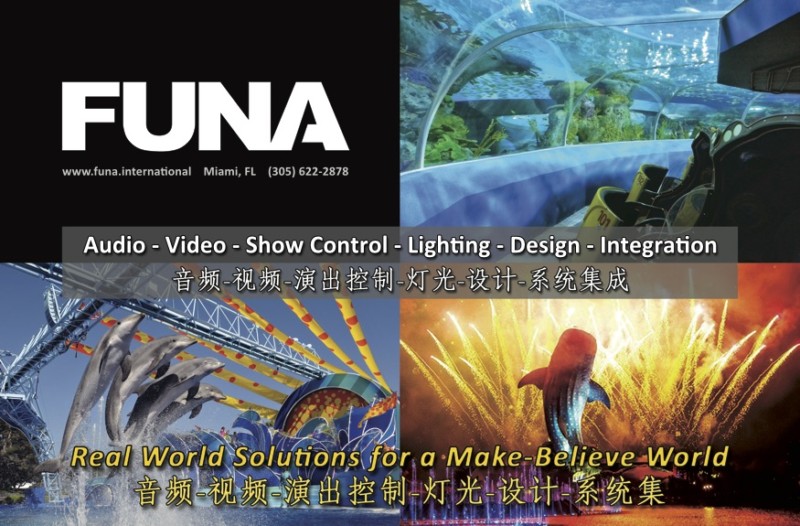 For the lagoon, FUNA took a cue from cruise ship showrooms, which often are used as multipurpose venues, housing everything from Broadway-style shows and concerts to film screenings and cooking demonstrations. Each speaker tower surrounding the lagoon is its own zone, allowing it to play in sync with the other towers for the “Glorious Sky” show, run audio unique to a passing float during the parade, play the background music of the themed zone the tower is adjacent to, and join with other speakers throughout the park as part of a park-wide paging system.

This system is a departure from traditional methods, which often rely on pucks embedded into the concrete along a parade route to track float locations. One of the restrictions of this system is that parade units need to travel in a prescribed order. With Ocean Kingdom’s parade route being the longest in any theme park, it became cost prohibitive to install pucks in the park, so FUNA devised a system which not only allows the parade floats to sync with surrounding land-based speakers, but allows the floats to operate in any order without jeopardizing the parade soundtrack.

Each of the eight parade floats features its own audio track, which then syncs with the land-based audio system through a combination of systems on each float, primarily GPS and RF, which broadcast the float position to the main park control system. Each float is given its own designation as it drives into a zone, so while it’s playing its own music, the land-based speakers lower the background music for the thematic zone they’re in and begin playing the float audio as well. If a float becomes inoperative during a parade, the system keeps going.

Redundancy is built into the system. “If we lose an amp, the system flags the problem right away and notifies the system technicians,” says Arnold. If for some reason the main brain were to have a fault, “Instantly, a backup processor kicks in to take its place. It takes milliseconds, and guests won’t even be able to tell.” Likewise, if a gardener cuts into a buried speaker line with a shovel, the system knows right away there is a problem and flags it immediately. “With this technology the park is not dependent on a problem becoming noticeable before it is rectified. Many time issues can be corrected before they become evident to a guest.”

Since each float’s position is carefully monitored, the speed of the parade does not become an issue of keeping the parade in sync with land-based speakers as with other theme park parades. There are also separate smaller vehicles and dancers accompanying each float. By creating a zone around each float, the land-based audio system knows exactly how long to run the audio for that particular unit.

As part of the redundancy, the parade is also overseen by an operator in a control booth. The operator both instigates the parade audio and terminates it once the parade ends by pressing a single button. Between those two steps, everything is autonomously controlled by the audio system. Should the need arise, the operator, who monitors the parade through a series of cameras placed along the route, can also manually stop the audio associated with a float should it become disabled. This allows the parade to continue with the other floats while maintaining audio and show integrity.

At the heart of the audio system is the Q-SYS CORE from QSC. According to Arnold, “We take off-the-shelf hardware and then create proprietary programming around it.” Connecting the system is a fiber optic network. Every equipment room has two separate data lines coming in from two different brains, helping to ensure self-recovery if needed.

Planning for the Future

Because theme park shows run every day, year round, it was important that the park-wide audio system have both a high level of reliability, provided by the system’s redundancy, and flexibility, which FUNA has provided through its multiple zone and audio usage strategy. This is especially important considering the needs for when a venue changes its function. The lagoon sound system is a perfect example of this, with its four functions – nighttime show, parade, background audio, and paging system – and its flexibility to change as the programming and environment change over the years. In addition, the lagoon audio can be split into four different zones, with a parade unit being placed in each zone as an individual show element.

One of the key aspects of devising the sound system was allowing for connecting the theme park with other resort properties both existing and ones yet to be built. Both the system within the park and any system deployed property wide needed to be world-class and highly flexible for expansion. Arnold speaks to the future of the system: “There are always advances in tech, but the backbone is fiber and fiber is not going away anytime soon. What we do with the fiber may change, but we added in extra fiber capacity for expansion and future technology. Networking gear is industry standard now and could be changed out to something more advanced when it comes along – it is not proprietary. Ocean Kingdom currently has the most up to date hardware and software. If at some point technology advances and new features are needed, you are changing the comparatively inexpensive equipment, not digging up sidewalks to get at the fiber.”

Since the resort opened, two new hotels have been added, while a new themed zone within the park, a new circus venue, and a safari park with both daytime and nighttime safari options have been announced for the next few years.

On the expansion, Arnold says, “Should we be asked to include another park or attraction or hotel we absolutely can. It will operate as its own entity, but it would use the existing master control for maintenance. The system we installed is ready to attach to future projects.”

In addition to being ready for expansion, Guangdong Chimelong Group, under the leadership of Mr. Su Zhigang, was adamant that the park-wide audio system for Ocean Kingdom be world-class. “Mr. Su entrusted FUNA to deliver on this technology,” explained Scott Arnold, “We appreciate that trust and delivered a system that is appropriately technologically advanced, yet simple to operate and maintain.”

Joe Kleimanhttp://wwww.themedreality.com
Raised in San Diego on theme parks, zoos, and IMAX films, Joe Kleiman would expand his childhood loves into two decades as a projectionist and theater director within the giant screen industry. In addition to his work in commercial and museum operations, Joe has volunteered his time to animal husbandry at leading facilities in California and Texas and has played a leading management role for a number of performing arts companies. Joe has been News Editor and contributing author to InPark Magazine since 2011. HIs writing has also appeared in Sound & Communications, LF Examiner, Jim Hill Media, and MiceChat. His blog, ThemedReality.com takes an unconventional look at the attractions industry. Follow on twitter @ThemesRenewed Joe lives in Sacramento, California with his fiancé, two dogs, and a ghost.
Share
Facebook
Twitter
Linkedin
Email
Print
WhatsApp
Pinterest
ReddIt
Tumblr
Previous articleKaka’s Great Adventure
Next articleUniversal Orlando’s Innovative Volcano Bay Waterpark Will Explode on the Scene in 2017

How attractions industry creatives and geeks shelter in place, inventively