[dropcap color=”#888″ type=”square”]C[/dropcap]himelong Ocean Kingdom, since opening March 2014 in Zhuhai, China, has been celebrated as a major advance in the quality of Asian theme parks. The park has already received considerable official recognition including being honored by the Themed Entertainment Association with a 2015 Thea Award for Outstanding Achievement, and five Guinness World Records, including World’s Largest Aquarium. Now, the $806.5 million, 125-acre park means to set a new record with its new 1,000-seat, 5D theater opening June 2015: “Kaka’s Great Adventure.”

Story-wise, “Kaka’s Great Adventure” is designed to set the stage for a day at the park, introducing guests to the Chimelong Ocean Kingdom characters and their backstories before they visit the other attractions. The theater building is adjacent to Ocean Main Street, close to the park entrance.

Equipment-wise, the 18-minute experience is impressive for the sheer size of its 134,000 m2, semi-circular main theater and its components: its vast 3D silver screen (18 x 88 meters), 2,119-speaker audio system with 119 subwoofers, high-resolution 3D projection (10344 x 2120 pixels) and sophisticated, 4D motion seats, pneumatically powered with what is said to be the first implementation of special effects armrests.

Talent-wise, this attraction is the result of international collaboration between leading creatives and suppliers from around the globe. Installation teams from South Africa and Czechoslovakia complemented engineers and technicians from Germany and Spain, along with the lead creative and technical teams from North America, India and Austria:

FAR Out! Creative Direction (Los Angeles). We interviewed principal creative director, Rick Rothschild. A former Disney creative executive and a specialist in media-based attractions, he is best known for his work on Captain EO and Soarin’ Over California. He was contracted by Prana Studios.

Prana Studios (Los Angeles/Mumbai) a 3D animation and visual effects house, brought on by Chimelong as the media and music producer. Other recent projects for Prana Studios include the EU Pavilion at Expo Milano 2015, and The Marvel Experience. We interviewed Arish Fyzee, creative director.

How does Kaka’s Great Adventure add to the overall storyline of the park?
Rick Rothschild: It serves as the central storytelling piece for Ocean Kingdom. It was designed not only as a great piece of entertainment, but to inform the overall guest experience of the park, to have the park’s organizational thematic environment make sense. It provides backstory and enhances the personalities of many of the characters found within the park, from the penguins to the whale sharks and numerous other characters.

Please walk us through the guest experience and the different sections.
RR: Guests get the first of two “story chapters” in a five-minute video, presented on six large screens across the width of the preshow. On a mythical planet, a situation is causing turmoil to the polar region where penguins, polar bears, and other polar creatures live. A monster deep in the ocean is sucking up magma and warming the ocean, causing the polar cap to melt. The Ocean Genie, a magical young whale shark pixie, is sent off by the Penguin King to search for strong and capable heroes who have compassion, heart and bravery. He finds teenage tigers Kaka and Kiki and believes them to be the heroes he seeks. The pre-show ends with the Ocean Genie leading them to start their Great Adventure.

The main show tells the story of how the trio struggles to reach and finally defeat the deep sea villain, the Magma Monster. After the climatic undersea battle is waged and the polar cap is saved, appearing from a dimensional cloud special effect a large animatronic parrot plane swoops out over the audience, flying out from above the 3D screen on a cable system and coming within three meters of the audience area, carrying Kaka, Kiki, and the Ocean Genie, who wave as they fly away in the “kiss goodbye” at the end of the show. 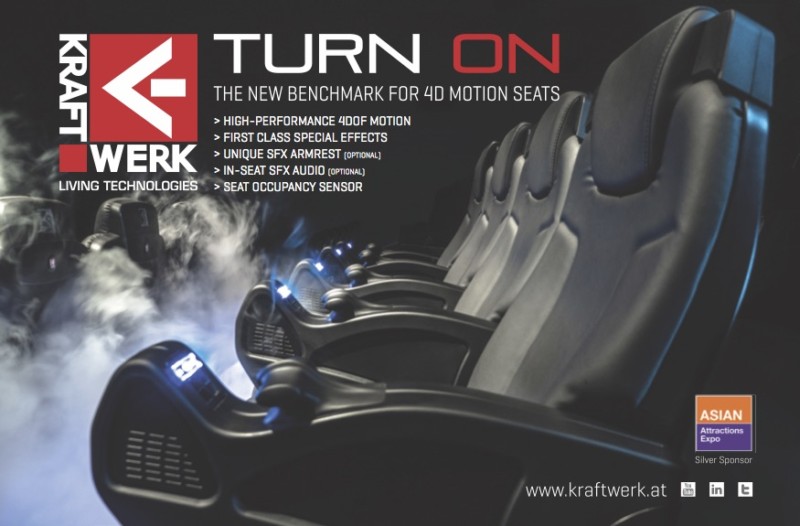 What are some noteworthy technical aspects supporting the storytelling?
RR: To my knowledge, this colossal main theater is the largest of its kind. The huge scale of theater and screen are extraordinarily impactful, especially coupled with Kraftwerk’s new generation of motion seat. It is an immersive ride story, not just a theatrical movie presentation. It’s a powerful combination: the motion the seats provide, the 3D visuals from Prana and effects – sensations including smells and wind, things that tickle and poke, all those kinds of fun things.

For example, when attacked by a swarm of bees, the guests are surprised with tickles to their necks and stinging pokes to their backs, while the in-seat audio speakers are used to enhance the sound of the attack. At that moment also comes the sophisticated motion of the seats that together enhance the immersive 3D media experience specifically designed to take advantage of all these effects.

The media is very high resolution 3D, with six projectors blended across the width of the screen for each eye, accompanied by a very large, sophisticated audio system [see sidebar]. The latest in CG animation techniques provides guests a continuous view into a 3D world that completely surrounds them. The animation design allows for 3D effects to spread across the width of the surrounding screen seamlessly. It’s quite an impressive combination of hardware and technology that allow us to create numerous exciting 3D “reach” and “flinch” moments for the guests.

In the end, all of this amazing technology supports the story to make the 5D experience as immersive as possible. That’s what it’s all about.

Manfred Meier: The goal was to guarantee that every single visitor experiences the same overwhelming and stunning 5D adventure – no matter where they are placed within the auditorium. This can be technically daunting, given the large scale of everything in this project. To meet these challenges we developed special solutions particularly regarding the projection system and 4D Motion Seat special effects.

One key piece of technical innovation is the newly developed Special Effects Armrest, with the ability to precisely adjust wind, scents, water blast, strobe lights, LED lighting and so forth. We believe this new approach guarantees enhanced performance, especially for large theaters such as this one – better than having effects coming from the ceiling, railings or seat backs. The Special Effects Armrest also features a unique seat occupancy sensor that makes it possible to deactivate unoccupied seat units – a real breakthrough in terms of efficient and sustainable operation.

Arish Fyzee: Both pre-show and main show are in what we call stylized animation, using a combination of third-party software like Maya, Renderman, and Nuke as well as our own proprietary software. The rendering requirements for this, because of image size, resolution, high frame rate and 3D, were massive: the equivalent of creating three and a half full-length movies in full CG. The 60 fps frame rate gives a very sharp, clear image, especially with fast moving objects in the show.

What were some of the special challenges and solutions in creating this unique, custom attraction?
AF: Accommodating the gigantic screen required creating specialized camera lenses in our computers to achieve a perfectly resolved singular image, stitching together multiple cameras. We also had to increase the resolution many more times than normal movies (each frame is over 22 million pixels as opposed to just over 3 million.)

The screen literally curves around the theater. That brought up the challenge of finding a way to view and edit the wraparound media. One of the devices we used for visualization was the Oculus Rift 360 virtual reality system.

MM: An intensive design phase of over 16 months led by Kraftwerk Living Technologies in close cooperation with Chimelong’s design team was followed by an equally intensive integration and implementation phase of nine months on site.  It was a challenging yet rewarding experience that involved coordinating many disciplines into this unique one-of-a-kind attraction.

The 5D theater is huge! To achieve the project’s design, technical and schedule goals, all aspects of staffing, design, procurement, production, shipping, installation and programming were also scaled to meet the size of this project.

How involved was Chimelong in the process?
RR: Chimelong, led by company Chairman Mr. Su Zhigang, is dedicated to delivering quality and satisfaction with everything they provide to their park and resort guests – from how the operational cast is trained to interact with the guests, to the crafting of each attraction and experience.

Mr. Su takes acute interest in all aspects of design and development. He is enthusiastic about quality. He is a true showman who knows his audience and has high expectations of his internal team as well as the participating vendors and consultants. His continual and passionate involvement, from concept to opening, helps assure that each project is successful.

Where do you see the future of 5D theaters?
MM: This project achieves a new benchmark that will raise the stature of 4D theaters as main attractions in parks. The challenge is to look for more creative ideas that will utilize these advanced technical resources. This not only applies to 4D theaters, but also to all kinds of media-based-attractions.

RR: I go back to my first experience of Captain EO in the 1980s. At that time, we were looking to extend the 3D experience beyond what technology had previously provided. We have had many extraordinary technological advances since then – there continue to be amazing leaps in what we can do in terms of scale and technology and the ability to engage all the senses. The future is as limitless as our imaginations – that’s the fun of it!

Rebecca Lam ([email protected]) is an aspiring show/ride engineer. She has a Mechanical Engineering degree at Rice University in Houston and is now an intern at Oceaneering Entertainment Systems in Orlando. She speaks English, Mandarin and Spanish. 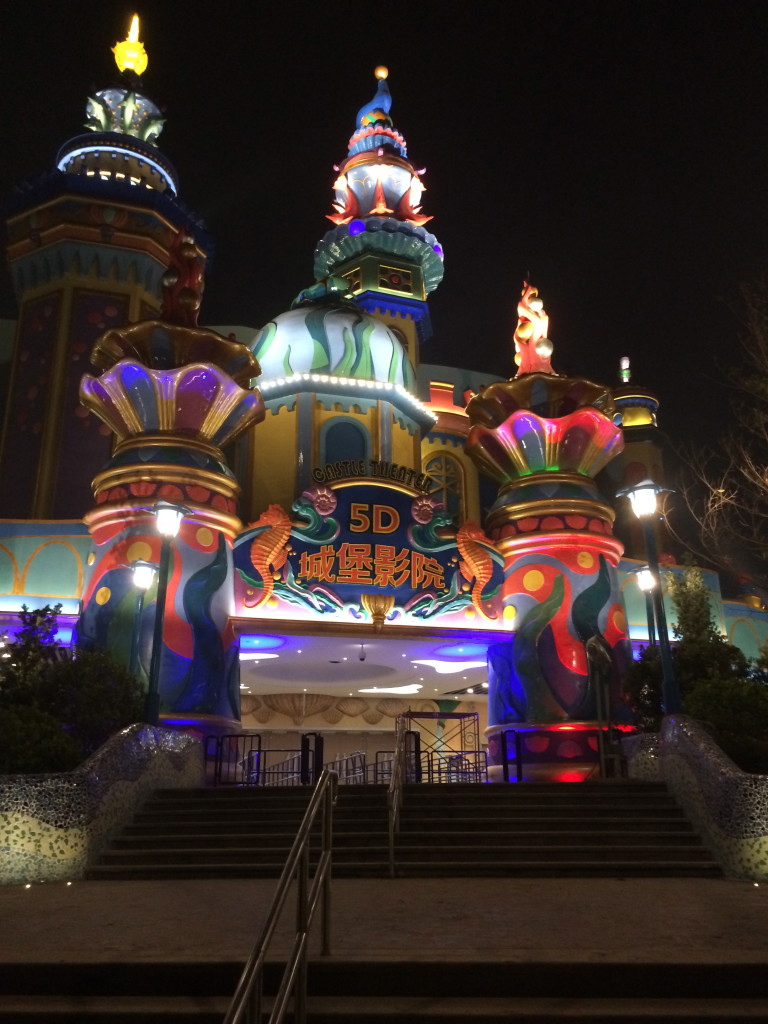 –Custom designed water system with water treatment operates at pressures of up to 70 Bar.

What was the vision that Chimelong had in pursuing this project and why did it choose a 5D
platform?
Paul Yuen: It was important for us to create a new story that belongs only to us. We chose to use film and
5D technology because we think this is the most effective way of simulating reality.

What were the benefits of an international production team?
Paul Yuen: It was a dynamic group of team members! We had key members coming from the United
States, Europe, India and both Guangzhou, Zhuhai and Hong Kong, and more. It forced us to consider
cultural diversity in the project and allowed us to benefit from the best practices experience from around
the world.

Do you plan on creating more 5D theaters?
Paul Yuen: We believe Chimelong will continue to develop more films like Kaka’s Great Adventure in the
future in order to solidify our own story telling ability. The 5D Castle Theater will continue playing this role.

Joe Kleimanhttp://wwww.themedreality.com
Raised in San Diego on theme parks, zoos, and IMAX films, Joe Kleiman would expand his childhood loves into two decades as a projectionist and theater director within the giant screen industry. In addition to his work in commercial and museum operations, Joe has volunteered his time to animal husbandry at leading facilities in California and Texas and has played a leading management role for a number of performing arts companies. Joe has been News Editor and contributing author to InPark Magazine since 2011. HIs writing has also appeared in Sound & Communications, LF Examiner, Jim Hill Media, and MiceChat. His blog, ThemedReality.com takes an unconventional look at the attractions industry. Follow on twitter @ThemesRenewed Joe lives in Sacramento, California with his fiancé, two dogs, and a ghost.
Share
Facebook
Twitter
Linkedin
Email
Print
WhatsApp
Pinterest
ReddIt
Tumblr
Previous articleSliding into Asia
Next articleOne System to Run it All