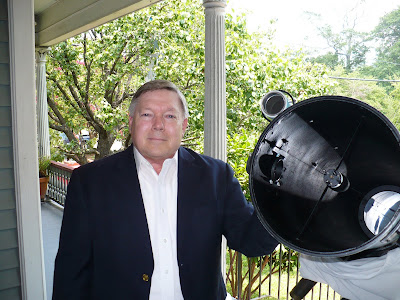 The Importance of Being Human:
How planetarium operators can differentiate their facilities, ease up on their budgets and continue the storytelling tradition
by Phil Groce, Founder/Planetarium Designer,
Helping Planetariums Succeed LLC
Over a human lifespan, one is likely to learn much more science from informal education sources such as museums, libraries, documentaries, and the Internet than in the formal education setting of the classroom. Today’s planetariums should strive to use all the capabilities of their systems, in order to continue delivering unique experiences that attract and educate their visitors.
Planetariums have gone through an amazing revolution with the advent of fulldome digital planetarium projection systems. For the first time, we have a presentation medium with some standardization. We have the ability to show virtually anything one can imagine. Now a program produced for a 20-meter dome and designed to play back on a multi-million dollar system can play back flawlessly on a 6-meter dome on a system that costs less than $100,000. This should be the “golden age” or the “renaissance” of planetariums – but is it?

This article originally appeared in a slightly different version in the March 2012 issue of The Planetarian, published by the International Planetarium Society (IPS). Reprinted with permission.

Judith Rubin
Judith Rubin ([email protected]) is a leading journalist, publicist, strategist, blogger, content marketing specialist and connector in the international attractions industry. She excels at writing about all aspects of design and technical design, production and project management. Areas of special interest include AV integration and show control, lighting design and acoustics, specialty cinema, digital video and world’s fairs. Judith has ties to numerous industry organizations. From 2005-2020 she ran communications, publications and social media for the Themed Entertainment Association (TEA). In 2013, she was honored with the TEA Service Award. She was development director of IMERSA, and co-chair of the 2014 IMERSA Summit. She was publicist for the Large Format Cinema Association in the 1990s, now part of the Giant Screen Cinema Association (GSCA) and has also contributed to the publications of PLASA, IAAPA and the International Planetarium Society. Already making her mark as a magazine and book editor, Judith joined World’s Fair magazine in 1987, which introduced her to the attractions industry. Launching as a freelancer in the mid 1990s she has contributed to dozens of publications and media outlets including Funworld, Lighting&Sound America, Sound & Communications, Urban Land, The Raconteur and The Planetarian. She joined InPark in 2010. Judith earned a Bachelor of Fine Arts from Pratt Institute. She has lived in New York City and the San Francisco Bay Area, and now makes her home in Saint Louis, where she is active in the local arts and theater community.
Share
Facebook
Twitter
Linkedin
Email
Print
WhatsApp
Pinterest
ReddIt
Tumblr
Previous articleWorld’s First Cartoon Network Themed Waterpark Planned For Thailand
Next articleJapanese Theme Park Operator Starts Ferry Service Between Shanghai and Nagasaki