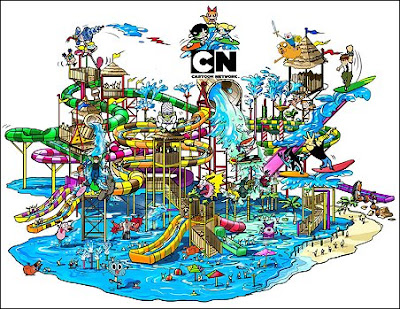 Bangkok, Thailand (February 28, 2012) /Newswire Today/ — Scheduled to open in 2013, and named Cartoon Network AMAZONE, the waterpark is a nod to the lush Amazon Rainforest while infusing the world’s most popular animated series and toon heroes including Ben 10, The Powerpuff Girls, Johnny Bravo and The Amazing World of Gumball.

“Cartoon Network is all about the fun and energy of the playground, and the addition of Cartoon Network AMAZONE means that families can literally step into our vibrant world of animation and vacation with their favourite characters like never before,” said Sunny Saha, Senior Vice President and Managing Director, Turner Broadcasting System Asia Pacific, Inc.

“We are very proud to have Thailand as the spectacular backdrop for the world’s first Cartoon Network-themed waterpark. Thailand’s reputation as the Land of Smiles and perfect weather will ensure a memorable visit for guests of all ages.”

Cartoon Network AMAZONE is being developed in conjunction with Amazon Falls Co. Ltd, an attractions and resorts developer in Thailand. Phase one of the waterpark is already underway and when completed will cover 14 acres of coastal plains in Bang Saray, just 15 minutes from Pattaya Beach City. Cartoon Network AMAZONE is set to attract up to 800,000 visitors a year when fully operational.

Cartoon Network is a global household name, and with this strategic alliance, we have no doubt that by welcoming our guests to meet their favourite Cartoon Network heroes, it will be a great draw for our park.”

Atchaka Sribunruang, Secretary General of Thailand Board of Investment added,”Apart from offering substantial foreign investment, Cartoon Network AMAZONE will create numerous training and employment opportunities for Thai people on all professional and skill levels and create many jobs both directly and indirectly for the local economy.

“Our famous tourism market offers some of the most exciting and exotic attractions in the world and we are confident that Cartoon Network AMAZONE will be a premiere family destination for all ages. The Thailand Board of Investment is very supportive of this project and will offer as much assistance as required.”

Bang Saray is an undiscovered gem just 16km from Pattaya. It retains its charm as a fully functioning fishing port yet is in close proximity to leading golf courses and resorts, and is home to some of the best seafood restaurants in Thailand. The idyllic location has been chosen for Cartoon Network AMAZONE because of its natural, unspoiled beauty, accessibility and the richness of its local culture. With over five million tourists a year to the Chonburi province, it is one of the most popular tourist destinations in Thailand. Last year, Pattaya was voted “Golf Destination of the Year 2012 for Australasia and Asia” by IAGTO.”

Turner Broadcasting System Asia Pacific, Inc., a Time Warner company, is a major producer of multiplatform news and entertainment content around the world and the leading provider of programming for the basic cable industry.

ABOUT AMAZON FALLS CO. LTD.
Amazon Falls Co. Ltd. “AFCL,” is developing the world’s first Cartoon Network water theme park located in Bang Saray, 15 minutes from Pattaya Beach City, Thailand. The property it has chosen for creating CN AMAZONE has views of the ocean and is easily accessible by car on the main Sukhumvit Highway and located only 90 minutes from the Bangkok international airport. AFCL has a world class team of designers along with top water attraction specialists to work on this project.