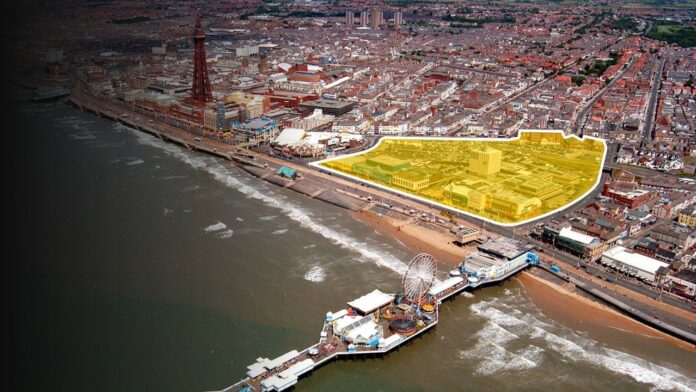 Plans for a major new leisure destination off Blackpool’s famous Golden Mile are to take a step forward. Nikal Ltd & Media Invest Entertainment have announced that a consultation is due to be launched in the coming weeks on a planning application for the first phase of Blackpool Central.

The first phase will include a new multi-story car park and Heritage Quarter, with other aspects of the development included in outline. Developers have now asked the Council for its opinion (formally known as a ‘scoping opinion’) in relation to the topics, methods of assessment and level of detail that would be required in the Environmental Statement that must accompany any future application for planning permission.

The largest single investment in Blackpool for over 100 years, the plans are set to transform the former Blackpool Central train station site, once the world’s busiest train station. Creating a new year-round leisure destination is estimated to bring in 600,000 additional visitors to the town every year, with a combined annual spend of £75m, and create up to 1,000 new jobs.

A new Heritage Quarter will include the Grade II Listed former King Edward VII Picture House and locally listed King Edward VII pub. The destination will also feature a new major public square for live events, such as music concerts, light shows, sporting events and markets, which will sit alongside new hotels, restaurants, a food market and multi-story car park. The world-class visitor attraction will include a new indoor theme park, including a wide variety of rides, the UK’s first flying theatre and the world’s “most advanced” virtual reality immersive experience.

Richard Fee, Chairman, Nikal Ltd said: “Blackpool Central will become a major new destination with everything from a new indoor theme park and public square, to hotels, restaurants and a heritage quarter.

“With high quality entertainment for all the family, this transformational project will bring hundreds of thousands of new visitors to Blackpool and provide a huge boost to the local economy. This first planning application is an important step forward and will see us deliver a new multi-story car park and the Heritage Quarter, which will enable us to deliver the future phases.”

Cllr Lynn Williams, Leader of Blackpool Council said: “We can’t underestimate the difference that this high-profile, game-changing development will make to Blackpool’s tourism offer and the boost it will provide to the town’s economy. After working hard behind the scenes with developers Nikal and Media Invest Entertainment, we are delighted the project is now at the planning application stage and poised to transform Central Station car park in the next few years.”

Blackpool Council is working closely with both parties to help unlock the development opportunity which is envisaged to be delivered in several phases over a five to ten year period. Subject to planning approval the multi-story car park would take around 12 months to build, during which the existing surface car park will stay partly open.