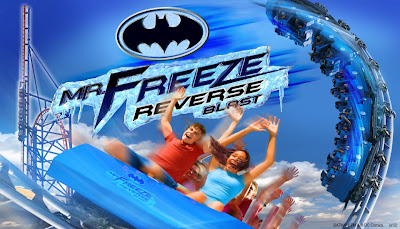 Arlington, TX, USA /PRNewswire/ — Mr. Freeze: Reverse Blast was introduced at Six Flags Over Texas on May 12 with the ultimate cool dude, Vanilla Ice, performing in concert to officially celebrate the ride’s grand opening. After his performance, Vanilla Ice grabbed a front row seat on the park’s newest twist on one of its most popular thrill rides. Members of Big Brothers Big Sisters of North Texas were also on hand to enjoy the inaugural ride. Mr. Freeze: Reverse Blast sends riders backwards through a 190-foot tunnel, into a 180-degree inversion then climbing more than 200-feet in the air where they will find themselves suspended, dangling in the air, before repeating the entire chilling experience.

“I am an adrenaline junkie. As a kid I always loved jumping on the biggest and fastest ride at Six Flags Over Texas,” said Vanilla Ice. “I was really excited to perform and then ride Mr. Freeze: Reverse Blast. The backwards launch and going up the tower facing straight down is a real rush.”

Thrill seekers will notice additional ride enhancements including new logos on the cars, an updated entrance and new graphics on the tunnel.

Six Flags is delivering this new and innovative twist on an already popular roller coaster in two of its parks. Mr. Freeze: Reverse Blast opened to the public at Six Flags St. Louis on May 5.

Both rides continue to feature the original MR. FREEZE theme, patterned after Batman’s cold-hearted nemesis in the DC Comics Batman series. As guests take the chilling walk through “Snowy’s Cones,” an old abandoned ice cream warehouse that secretly doubles as the favorite hideout of this “Villain of Chillin,” the anticipation builds for Mr. Freeze’s iciest revenge. Riders strap into one of the 20-passenger seats and take off on the reverse ride-of-a-lifetime, covering nearly 1,500-feet of track at spine-chilling speeds of up to 70 mph — making it the fastest reverse roller coaster ride in both Texas and Missouri.

BATMAN and all related characters and elements are trademarks of and © DC Comics.

Joe Kleimanhttp://wwww.themedreality.com
Raised in San Diego on theme parks, zoos, and IMAX films, Joe Kleiman would expand his childhood loves into two decades as a projectionist and theater director within the giant screen industry. In addition to his work in commercial and museum operations, Joe has volunteered his time to animal husbandry at leading facilities in California and Texas and has played a leading management role for a number of performing arts companies. Joe has been News Editor and contributing author to InPark Magazine since 2011. HIs writing has also appeared in Sound & Communications, LF Examiner, Jim Hill Media, and MiceChat. His blog, ThemedReality.com takes an unconventional look at the attractions industry. Follow on twitter @ThemesRenewed Joe lives in Sacramento, California with his fiancé, two dogs, and a ghost.
Share
Facebook
Twitter
Linkedin
Email
Print
WhatsApp
Pinterest
ReddIt
Tumblr
Previous articleVIDEO: InPark News YouTube Channel
Next articleSmall Museum in Novato Offers Bay Area Children New Way to Experience Space