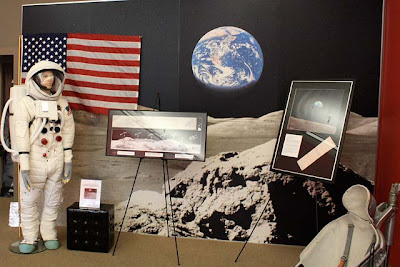 Novato, CA, USA May /PRNewswire/ — A new type of museum opened last October in the San Francisco suburb of Novato: The Space Station offers a quality experience for local residents and tourists alike without the high construction costs and government subsidies required for the on-going operations of most museums.

President and Founder of the investment management firm, Winans Investments, and philanthropist Ken Winans has served as a trustee to several large, Smithsonian affiliated museums, and felt there had to be a more efficient and effective way to offer the public a quality museum experience during this time of fiscal austerity.

Winans contacted the owners of an upscale shopping center in Novato’sIgnacio neighborhood with a unique idea:

The W Foundation, founded in 2002 by Mr. Winans and his wife Debbie Wreyford, would set up and operate a small space exploration museum using rare items from their extensive collection of space artifacts in one of the strip mall’s vacant retail space for $1 per month.

The neighborhood and local schools would gain a unique, educational venue free of charge, and the Pacheco Plaza Shopping Center will get increased traffic and new customers for its existing commercial tenants. When the retail space gets rented in the future, no problem, the museum can move to a different location – a nomadic space museum!

With an emphasis on space exploration, and how its discoveries in science and technology have benefited all of mankind, this museum was designed to be truly different:

First, Admission is free and 100% privately funded through donations from local businesses such as Winans Investments Capital Management & Research and Jeremy Forcier of First Cal Mortgage, in-kind support from local businesses such as The Walter Kieckhefer Company, and individual donations. Second, in order to keep costs contained, the museum is 100% volunteer staffed and is open three days a week or by appointment. Third, exhibits are changed four times a year by the volunteer staff to help encourage visitors to frequently return. And last, but not least, the public is given a unique, tactile experience as they are allowed to touch some of the space-flown artifacts.

Since its opening six months ago, the museum has averaged 642 visitors per month while only being open three days per week. Total attendance from all Space Station events in the Pacheco Plaza Shopping Center over the past ten months has exceeded 4,952 visitors. This figure equals 10% of Novato’s entire population! Visitors have come from all parts of the Bay Area and as far away Las Vegas, NV. Remarkably, marketing has been limited to word-of mouth, internet blogs and social networks.

Since the opening of The Space Station, The W Foundation’s volunteer base has increased from 18 to 36 with another 23 individuals who have stopped by the museum signed up to volunteer in the future. The donations have largely covered operational expenses.

The nimble Space Station museum is moving to a new location in the Pacheco Plaza Shopping Center in June and is planning an outdoor event called Space Fest on July 14th.

More information can be found at www.thewfoundation.org

Joe Kleimanhttp://wwww.themedreality.com
Raised in San Diego on theme parks, zoos, and IMAX films, InPark's Senior Correspondent Joe Kleiman would expand his childhood loves into two decades as a projectionist and theater director within the giant screen industry. In addition to his work in commercial and museum operations, Joe has volunteered his time to animal husbandry at leading facilities in California and Texas and has played a leading management role for a number of performing arts companies. Joe previously served as News Editor and has remained a contributing author to InPark Magazine since 2011. HIs writing has also appeared in Sound & Communications, LF Examiner, Jim Hill Media, The Planetarian, Behind the Thrills, and MiceChat His blog, ThemedReality.com takes an unconventional look at the attractions industry. Follow on twitter @ThemesRenewed Joe lives in Sacramento, California with his wife, dog, and a ghost.
Share
Facebook
Twitter
Linkedin
Email
Print
WhatsApp
Pinterest
ReddIt
Tumblr
Previous articleRapper Vanilla Ice Sends Mr Freeze Coaster into Backwards Spin
Next articleUK’s Largest Man-Made Wildflower Meadows Prepped for Olympic Park