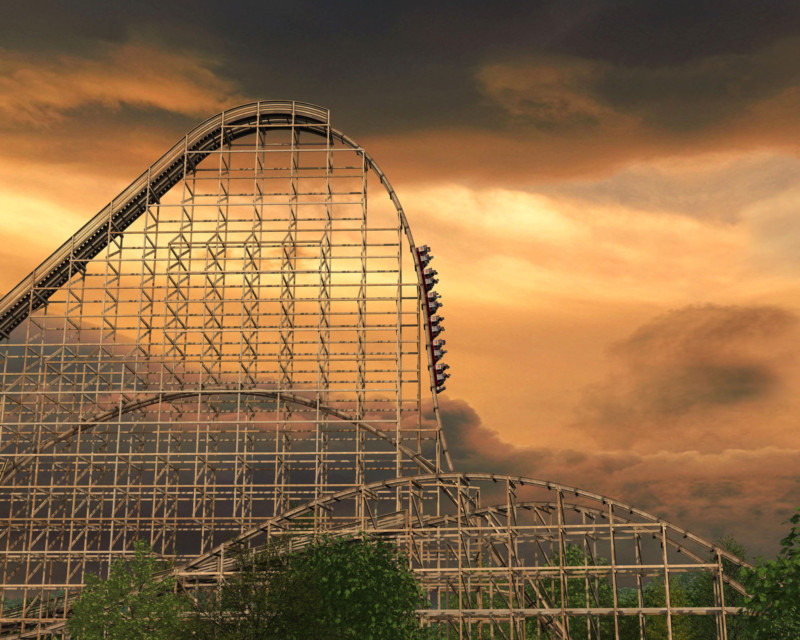 “Six Flags Great America is known for introducing record-breaking and first-of-its-kind roller coasters,” said Hank Salemi, Six Flags Great America park president. “Goliath will be unmatched – setting not only one, but three world records and featuring two inversions. All of the ride elements, including an 85 degree plunge down the tallest drop on a wooden roller coaster, make Goliath the most extreme wooden roller coaster in the world. We are thrilled to bring this record-smashing coaster to our guests for the 2014 season.” Goliath takes riders up a mammoth 165 foot lift hill, then plunges them down a record-setting 180 foot, 85 degree drop, crowning it the tallest and steepest drop on a wooden roller coaster in the world. Riders will gain record-breaking speeds of up to 72 miles-per-hour and blast into jaw-dropping maneuvers including three over-banked turns, a 180 degree zero G roll, an inverted drop and an inverted zero G stall. Goliath completely annihilates the wooden roller coaster competition. Record Breaking Facts

Goliath will make its home in the County Fair section of the park. Construction begins this fall and Goliath is scheduled to open spring of 2014. The biggest Fright Fest® ever is coming this fall. Six Flags Great America’s annual celebration will undergo the largest expansion in the park’s history with more haunted houses and ghouls than ever. Six Flags Great America also announced today that 2014 season passes are now on sale at the lowest prices of the year and provide unlimited visits for the rest of the 2013 season (including Fright Fest®) and all of the 2014 season. For a limited time, with the purchase of a season pass four-pack, guests will receive a free upgrade to a gold season pass that includes free admission and free season parking to any Six Flags Theme Park with every pass. Annual Memberships Passes, which include all of the great benefits of a season pass, are also available at an affordable monthly price. Offer expires October 28, 2013. About Six Flags Great America and Hurricane Harbor Two great parks, one destination! Located between Chicago and Milwaukee, Six Flags Great America offers endless adventures for the entire family with 14 heart-pounding roller coasters, a 20-acre water park, spectacular shows and three children’s themed areas with over 30 rides. About Six Flags Entertainment Corporation Six Flags Entertainment Corporation is the world’s largest regional theme park company with $1.1 billion in revenue and 18 parks across the United States, Mexico and Canada. For more than 50 years, Six Flags has entertained millions of families with world-class coasters, themed rides, thrilling water parks and unique attractions including up-close animal encounters, Fright Fest® and Holiday in the Park®. For more information about upcoming 2014 Six Flags rides and attractions, including a video highlighting the new rides, visitwww.sixflags.com/2014news.