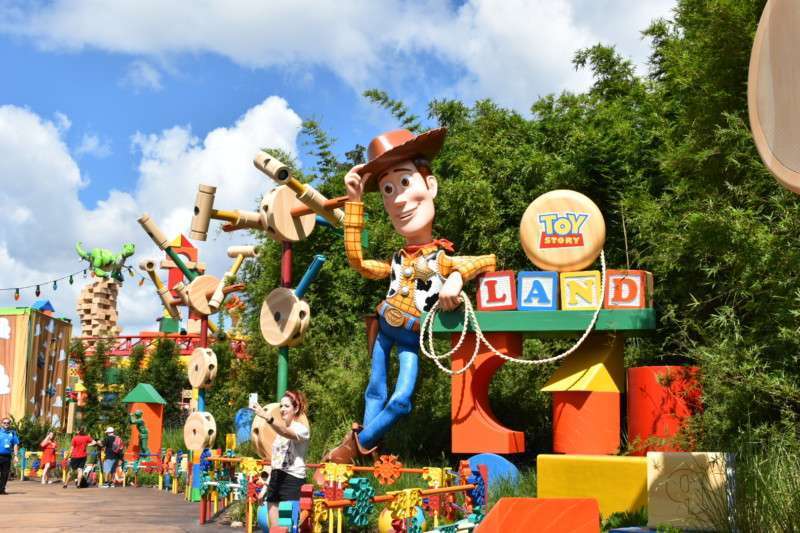 ABOVE: The larger than life entrance to the new Toy Story Land at Disney’s Hollywood Studios ini Orlando, FL.

Toy Story Land at Walt Disney World Resort in Orlando, Florida is the company’s fourth installation of the land themed on the popular Pixar film franchise. Walt Disney Studios in Paris, Hong Kong Disneyland and Shanghai Disneyland each have a version of the land, customized with varying assortments of themed rides and shops. The Orlando iteration seems the most fullyrealized, taking guests into a scaled-up version of Andy’s backyard that enables visitors to experience it from the toys’ perspective (Andy is the human character in the films who owns the collection of adventurous toys).

It also marks a formal change in how attractions are presented at Disney’s Hollywood Studios, and across its theme parks. And with the addition of a new in-park app, guests can immerse themselves even further in the worlds of their favorite characters and stories.

According to the backstory, Andy had been playing in the yard, assembling a model coaster for his Slinky Dog to ride, when he got called away. That is the moment we enter the scene, and are allowed to roam around the backyard while green army men perched around the perimeter are on the lookout for Andy’s return.

To understand the scale of the land, these green army men, normally about two inches tall, are the size of humans. Tinker toys and Christmas lights tower above the walkways, and giant footprints in the ground indicate Andy has been through here recently.

“We always start with the films,” said Walt Disney Imagineer Ryan Wineinger. “We take the themes and values of the films and brainstorm tons of new ways to bring those stories to the land.”

Two new attractions are unique to Orlando among the four Toy Story Lands and complement the existing Toy Story Mania! interactive dark ride, which was expanded to allow for additional throughput. They are a spinning flat ride, Alien Swirling Saucers, and Slinky Dog Dash, which is the new centerpiece of the land.

“We wanted to celebrate the multigenerational family experience because we knew that was something Disney’s Hollywood Studios would greatly benefit from. So every experience we developed touched on that,” explained Wineinger. “It just so happens that in this case one of those experiences is a coaster. We thought it would be wild to imagine Slinky Dog wrapped around a toy coaster play kit.”

With just enough thrill to keep adults interested, but not too much speed to frighten away kids, Slinky Dog Dash hits that perfect middle ground of appeal to a wide range of ages. “Slinky Dog is charming,” said Kathy Mangum, Senior Vice President, Walt Disney Imagineering. “It’s fun watching kids come off the coaster – they look like they’ve conquered the world, because it’s not an extreme coaster, but they have taken on something big.”

Disney’s trademark attention to detail is evident throughout the land. Giant “Cooties” toy bugs inhabit the area surrounding the bathrooms. A large wrench in the queue for Slinky Dog Dash is sized precisely to fit around the columns supporting the “toy” track for the coaster.

“Everything in the land has to have the authenticity of a real toy you could find at your local toy store,” said Wineinger. Although Disney is typically pretty quiet regarding vendors, Wineinger acknowledged “it takes a village of experts from around the world to bring each one of these experiences to the guests.”

Toy Story Land marks the beginning of a transformation of the Disney’s Hollywood Studios park, as well as a shift in how guests will experience Disney parks. Instead of observing a story, Disney wants guests to find themselves within the world of their favorite characters. As opposed to a linear approach like the original Fantasyland dark rides (Peter Pan’s Flight, Snow White’s Scary Adventures, Pinocchio’s Daring Journey, etc…), non-linear storytelling experiences create a moment in time, allowing guests the opportunity to discover elements, treats and surprises on their own terms. Design focus turns to placemaking and creating an environment suitable for guests to engage in a bit of roleplay. You don’t get to be Mr. Potato Head, but you get to hang out in his world for a while.

“We are not trying to tell you a story with a beginning, middle and end,” explained Mangum. “[Disney’s Hollywood Studios] is still about movies, but we want you to experience movies by putting you into them.” Toy Story Land is what WDI considers Phase One of the park’s transformation. Next year, guests will be able to walk onto a different planet at Star Wars: Galaxy’s Edge and step into a cartoon with Mickey & Minnie’s Runaway Railway, continuing the metamorphosis of the park.

“When I worked on Cars Land for Disney California Adventure, we learned that walking through Radiator Springs and Route 66 was something people love doing, even if they haven’t seen the films,” said Mangum. “That told us we were on to something. So you see that with Avatar (Disney’s Animal Kingdom), Toy Story Land and we will see more of that in the future.”

“The great thing about Pixar films is they create really appealing places that you want to visit – it’s not only the characters but the actual locations in the films,” says Mangum. “When we are doing our blue sky brainstorming and start to come up with more ideas than we possibly have room for, then we know we’ve got a really good premise to work with. ‘Toy Story’ was exactly that kind of situation where we had to edit down our many ideas – that is a rewarding process.” • • •

The trivia and music can be accessed anywhere, but the remaining components are available only while at Walt Disney World and Disneyland.

Most of the in-queue games are designed for pass-n-play so only one phone is needed per group. While only a limited number of attractions currently offer games, the team is planning on continually rolling out new experiences and special effects to trigger within the parks.

Within the app, there are similarities between the California and Florida parks, but the experience is not identical. Peter Pan’s Flight in Florida is unique in that it has a lantern in the queue guests can activate to see Tinker Bell. In the Florida Space Mountain there is a space race where guests can build a spaceship and see it launch on the projectors in the ceiling overhead.

The app is a collaboration between many groups including WDI, the Disney Parks digital experiences group and various design teams.

“We are always interested in how we can give our guests the ability to interact and engage more deeply with the stories and the undiscovered secrets of our lands,” said Josh Gorin, Executive R&D Imagineer, WDI. “Now we take this device that people are already bringing into the parks and instead of it being something distracting or isolating, we can get them to look up and around and engage with the world.”

In addition to adding more games, future plans include augmented reality experiences and more levels of interactivity. “We think this is the start of a really cool way to add a new layer of storytelling and activity for those guests who want it, without impacting guests who don’t,” said Gorin. •

Joe Kleimanhttp://wwww.themedreality.com
Raised in San Diego on theme parks, zoos, and IMAX films, InPark's Senior Correspondent Joe Kleiman would expand his childhood loves into two decades as a projectionist and theater director within the giant screen industry. In addition to his work in commercial and museum operations, Joe has volunteered his time to animal husbandry at leading facilities in California and Texas and has played a leading management role for a number of performing arts companies. Joe previously served as News Editor and has remained a contributing author to InPark Magazine since 2011. HIs writing has also appeared in Sound & Communications, LF Examiner, Jim Hill Media, The Planetarian, Behind the Thrills, and MiceChat His blog, ThemedReality.com takes an unconventional look at the attractions industry. Follow on twitter @ThemesRenewed Joe lives in Sacramento, California with his wife, dog, and a ghost.
Share
Facebook
Twitter
Linkedin
Email
Print
WhatsApp
Pinterest
ReddIt
Tumblr
Previous article
Herschend: From cave tours to spinning coasters
Next article
Animax: Character building

Connect&GO: The grass is greener with next-generation technology