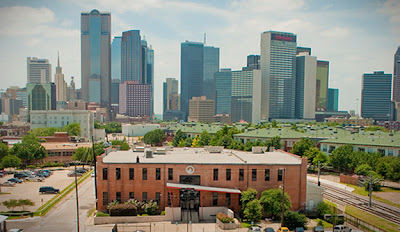 “After an 18-month process assessing several unique opportunities in Frisco, Richardson and Dallas, it became very clear that Reel FX should remain in its current location,” said Gannon in a statement. “Deep Ellum offers the perfect environment for the studio’s culture, provides ample amenities, and is located just steps away from DART’s green line. To continue to attract and recruit the best talent in the industry, the Deep Ellum location makes perfect sense for this fast growing company.”

The City of Dallas has offered a substantial economic incentive package as part of their business retention program, which played a significant role in Reel FX’s decision to remain in Dallas. The incentive package was approved by the City Council’s Economic Development Committee on June 4, 2012 and recommended to the full Council for final approval on June 27, 2012. The City’s Economic Development Office (Hammond Perot, Chris O’Brien and Karl Zavitkovsky) clearly demonstrated the importance of retaining Reel FX as a corporate tenant in Dallas. The pro-business attitude of Mayor Mike Rawlings was also instrumental in Reel FX’s decision-making process: he helped develop and structure the City’s economic incentive package, and leveraged relationships with other Dallas businesses to further support the overall incentives offered. The City of Dallas’ partnership with Reel FX showcases the willingness of Dallas to remain a “pro-business” environment and retain the top businesses in the city.

“Helping with the expansion of Reel FX’s headquarters and operations is a big win for Dallas,” said Michael S. Rawlings, Mayor of Dallas. “As a significant employer, who is an award-winning, animation, visual effects, design and entertainment and commercial studio, Reel FX’s commitment to Dallas cements our location as an innovation and creative business hub. We look forward to supporting their continued success and expansion.”

“We have called Dallas home for almost two decades, and our goal was to remain in Dallas and in Deep Ellum,” said Reel FX Chief Operating Officer Kyle Clark. “We couldn’t be happier to stay in the building we consider an important part of our past, and now, our future.”

Joe Kleimanhttp://wwww.themedreality.com
Raised in San Diego on theme parks, zoos, and IMAX films, InPark's Senior Correspondent Joe Kleiman would expand his childhood loves into two decades as a projectionist and theater director within the giant screen industry. In addition to his work in commercial and museum operations, Joe has volunteered his time to animal husbandry at leading facilities in California and Texas and has played a leading management role for a number of performing arts companies. Joe previously served as News Editor and has remained a contributing author to InPark Magazine since 2011. HIs writing has also appeared in Sound & Communications, LF Examiner, Jim Hill Media, The Planetarian, Behind the Thrills, and MiceChat His blog, ThemedReality.com takes an unconventional look at the attractions industry. Follow on twitter @ThemesRenewed Joe lives in Sacramento, California with his wife, dog, and a ghost.
Share
Facebook
Twitter
Linkedin
Email
Print
WhatsApp
Pinterest
ReddIt
Tumblr
Previous articleSummer Nights Returns to SeaWorld Orlando
Next articleAGA-BOOM and iLuminate Headline Summer Fun at Six flags Over Texas