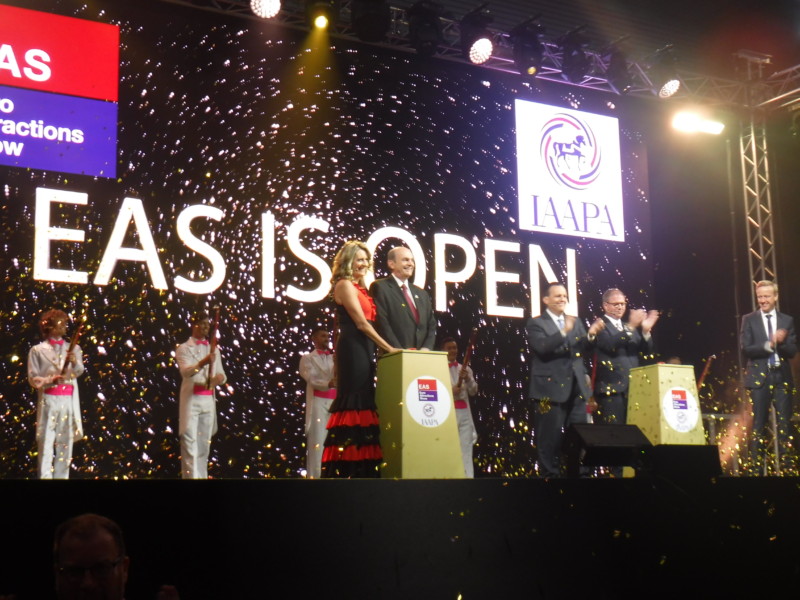 IAAPA’s European Attractions Show brought record numbers of people to Barcelona, Spain for the annual conference and expo. According to IAAPA, attendance nearly doubled from the 2015 show in Gothenburg, Sweden. Over 500 exhibiting companies spread out over 13,000 square meters of exhibit floor.

“Euro Attractions Show 2016 is record-setting. Kudos to the industry and the staff for producing this amazing event, and thanks to the entire region for adopting us for a week,” said John McReynolds 2016 IAAPA Chair and Senior Vice President of External Affairs for Universal Parks and Resorts.

The smallest of IAAPA’s three shows, EAS benefits from a laid-back atmosphere and European sensibility. With most of the exhibitors also planning to show up for the IAAPA Expo in Orlando in just a few weeks, big announcements and flashy reveals often tend to get held back until the November show. This makes it more of a relationship event, where buyers and sellers have time to actually talk and catch up, laying the groundwork for deals to be signed soon.

That’s not to say there wasn’t any news. IAAPA seemed to steal the spotlight with its announcement of moving their headquarters to Orlando. But Germany’s Europa Park also announced their “Project V” flying theater attraction. While the name is being kept a secret until the opening (anticipated for April/May 2017), details were released about the attraction. It will feature 2 theaters with 7 ride vehicles / gondolas in each theater. The attraction will have a throughput of 1,400 people per hour and feature a 4.5 minute show. Brogent and Kraftwerk are also collaborating on Project V. Read InPark’s recent story about Project V here

Garmendale Engineering also unveiled the new dark ride vehicle they designed for Santa Land in Rovienimi, Finland. The attraction is an existing dark ride that takes people through scenes to Santa’s cottage. The six new cars are designed to be traditional Finnish sleds. Garmendale is supplying the track and power system, known as their “QuadTrack” self-guided ride system. The new sleds will be in place for the November 20th re-opening. The 150m of track is designed with potential expansion in mind. As Santa Park continues to grow in popularity, the park can choose to add more sleds, expand the track and increase capacity.

One of the newer players at the show was Scruffy Dog, who also sponsored EAS. The five year old design build company recently brought on industry veteran Deborah Lee Eicher to head up sales and marketing. According the Eicher, Scruffy Dog has about 20 designers who initially started in fabricating for movies and tv sets, subsequently expanding into parks and attractions. The European based company is looking to expand outside of the continent.

EAS has become known for its great networking opportunities and this year was no exception. The opening night reception took place high above Barcelona at Tibidabo amusement park. Attendees were treated to spectacular views of the city, several of the park’s classic attractions were open, and live music, food and drink were everywhere.

The following evening, TEA held an industry mixer at L’Aquarium near Barcelona’s harbor. Guests could tour the aquarium facilities or watch the beautiful sunset on the patio while reconnecting with old colleagues and meeting new ones.

Show attendees also had the opportunity to use their EAS badge to visit several Barcelona attractions before and after the show, such as Port Aventura, which is deep in the throes of building Ferrari Land (and has been featured recently in IPM).

The week following EAS, The Europe & Middle Eastern division of TEA organized a special trip to Skyline Park outside Munich, Germany to see their new coaster, still under construction, in action. The ride is Maurer’s new Spike Coaster prototype. The ride vehicle was on display at EAS, but at Skyline Park, the group got to see it navigate the entire course. The ride is based on a rack and pinion system. It’s a powered coaster, but it has the ability to be interactive. Within predefined limits, riders will be able to accelerate on demand during the ride. The ride has a max acceleration of 1.2G and is approved for 90-degree vertical track.

Maurer also developed an app for the ride, so people can keep track of their performance or even compete with their friends in a dual track scenario.

At Skyline Park, the ride looks like an homage to the old Steeplechase attractions, with the venerable steed replaced with a futuristic motorbike. The system is flexible, and could do double-duty as a dark ride / roller coaster. Although the ride is still being programmed, the group had the opportunity to try out a small section of the ride.

After the tour of Skyline and the Spike Coaster, Maurer AG and Rethink Leisure Entertainment treated the group to several rounds of “Ein Prosit” at Munich’s famous Oktoberfest.

It was a perfect ending to a fantastic week at IAAPA’s EAS 2016.