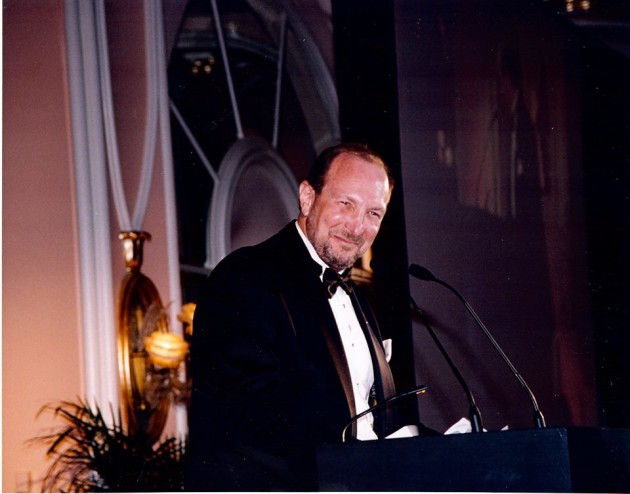 If I were to describe Peter in a single word – it would be “space.”  From the Space Quest Casino and the Kennedy Space Center Visitor Complex to retail space and public space, he was a pioneer in experiential design.  He would also make the space for others – like me – interested in not only what he, as an individual, did, but the accomplishments of the themed entertainment industry as a whole.

I first met Peter Chernack in my late 20s during a meeting of the Large Format Cinema Association, at the point when I was just starting my career in the attractions industry.  He was there to discuss the design of the Space Quest Casino at the Las Vegas Hilton, which spatially and thematically linked the adjacent traditional casino on one side with Star Trek: The Experience on the other.  After the presentation, I approached him with a few questions and he sat with me for close to an hour going into even more detail on the project.  He gave me his card and told me not to hesitate on contacting him if I wanted to discuss, well, anything. He loved to share and he wasn’t mired in corporate censorship. As the years progressed, I took him up on the offer, calling a few times when I was managing IMAX theaters to ask his advice on preshow programming.

Peter spent 30 years at Metavision Corporation, the last 13 as President of the company.  In 2009, he founded his own design company, The Chernack Group. Peter was also a founding member and past President of the Themed Entertainment Association (TEA).  He was born in 1948 and passed away on April 3, 2016.  Peter is survived by his wife Rebecca and his daughters Michelle and Daniella. The funeral was held April 5 at Mount Sinai Hollywood Hills, 5950 Forest Lawn Drive, Los Angeles.

Below are remembrances from some of those who knew him and worked with him within the TEA and the themed entertainment industry:

We met Peter in the mid-’80s and had the opportunity to work with him and his team on a Universal Studio’s project. Due to that introduction when Monty Lunde held the first meeting in Burbank to gauge interest in an association Peter was the only one in the room we knew…in fact he was insistent that we attend. Peter always put light into everything he did. Always generous with his time, talents and resources. Always generous with a point of view that he skillfully articulated – sometimes at great length!! Always up, positive energy. We cannot remember a time we ever saw him down. We will hold close those 31 years of happy memories! We will miss his light.

Both as friend and colleague, Peter was simply the best. His gentle soul and calm demeanor, together with a powerful intellect and strong work ethic, made him one of those people we are so fortunate to know and collaborate with in our working and personal lives. He will be greatly missed.

He will be sorely missed . This is very sad news I always had the most respect and affection for Peter . We first worked together on the Panasonic pavilion on CityWalk. My condolences to friends and family

I met Peter Chernack on the Castle Dracula project at Universal Studios Tour in early 1980. (There were no other Universal Parks at the time). I believe we had a HUGE budget of $3 million, and I quickly became a lifelong admirer of Peter and his talent for understanding and articulating the balancing dance between creative, technology, management, budget and exceeding the audience’s expectations.

Over the years, our paths crossed in business and in life. No one supported talent (of any kind) more than Peter. His kindness, words of wisdom and support meant everything . . . especially for me.

As a founding member and a past President of the Themed Entertainment Association (TEA), Peter’s passion and vision were vital to the growth of this crazy industry and . . . along with all the other Presidents of this prestigious group, his dreams have been realized.

I was fortune to see the joy in his eyes and smile whenever he talked about “his girls” . . . his amazing wife, Rebecca and his beautiful daughters, Michelle and Daniella.

I was grateful to call him a friend. Rest in peace, my friend.

Though Peter never suffered fools, his sense of humor could be wickedly cleaver and creative. This was often evident, but one instance I will never forget was in the late 90’s while we were all in Brussels at what was known as the TiLE conference (Technology in Leisure Entertainment). The European chapter of the TEA, mostly Brits at the time, had recently formed and we all decided to have dinner to celebrate being together. We found a wonderful restaurant that could serve our group of Americans and UK counterparts …….. and of course there was wine…..After many effusive toasts from Peter to everyone’s health and prosperity ……. there was more wine…..At one point, an exceptionally talented and humorous British architect named Ray Hole made a comment about all the new forms of American entertainment with catchy names such as Edutainment and Infotainment. He then made the proclamation that the Brits were going to develop their own brand of entertainment in the UK….. “Lootainment” …..and then there was more wine……..by the end of the evening Peter and others, through fits of laughter, had come up with several attractions only suitable for the Lootainment concept…….complete with appropriate sponsors. To this day, all we need to say to one another is “Lootainment” and it elicits chuckles and fond memories of that raucous and happy evening with our international peers.

It took several years for me to realize and it was unspoken, but Peter had become a mentor to me. Showing me how to lead, articulate with clarity and purpose and how to truly respect and honor friends and colleagues. As a person, Peter was always effusive with compliments and encouragement. He was the first to ask about your family, by name, and what they were doing. Peter always transmitted genuine warmth when he spoke on a personal level and you had the feeling he was completely focused on your concerns. He was the first to insist on taking the high road on all things that affected personal reputation, or the health of the TEA. He would remind us that we represent an industry that touches hundreds of millions of lives in many ways.

Joe Kleimanhttp://wwww.themedreality.com
Raised in San Diego on theme parks, zoos, and IMAX films, Joe Kleiman would expand his childhood loves into two decades as a projectionist and theater director within the giant screen industry. In addition to his work in commercial and museum operations, Joe has volunteered his time to animal husbandry at leading facilities in California and Texas and has played a leading management role for a number of performing arts companies. Joe has been News Editor and contributing author to InPark Magazine since 2011. HIs writing has also appeared in Sound & Communications, LF Examiner, Jim Hill Media, and MiceChat. His blog, ThemedReality.com takes an unconventional look at the attractions industry. Follow on twitter @ThemesRenewed Joe lives in Sacramento, California with his fiancé, two dogs, and a ghost.
Share
Facebook
Twitter
Linkedin
Email
Print
WhatsApp
Pinterest
ReddIt
Tumblr
Previous articleEXCLUSIVE: Four Leading Themed Entertainment Design Firms Join Forces With NASA to Create Unprecedented Space Experience
Next articleAlterface Brings Plants vs Zombies to Life in “Intra-Active” 3D Game Experience