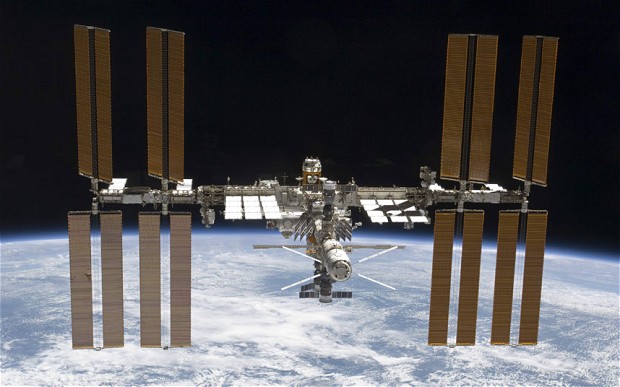 “We’re very concerned that if either Donald Trump or Bernie Sanders wins the Presidency, funds could be cut substantially for space exploration. Because our robotic explorers are less expensive to run and public polls have shown them to be cuter than human astronauts, we are planning to alter our existing manned space program into a progressive new attraction that will finance and keep unmanned space exploration alive.”

The new attraction will involve a training session, an actual flight to the International Space Station (ISS), and a return to Earth in a Soyuz spacecraft.  Bolden continues; “We discovered that when the Russians charged millions to launch tourists to the ISS, only a few people took up the offer.  Polls conducted at our NASA visitor centers around the country indicate that people don’t care about science and want something exciting and franchise oriented.”  To that end, NASA has teamed up with two major studios to license their film IP along with four leading themed entertainment design firms.  According to Bolden: “They are the best for what we have envisioned.”  Each of the four will handle one of the four elements of the new attraction.

Charlie Bolden: “Bob Rogers is a legend in the NASA visitor center community and we realized that he would understand best how to begin the experience.”

“It wasn’t that difficult,” Rogers told InPark’s Judith Rubin, “We created a 30 minute training regimen by using the old games we designed for Space Center Houston.  But this time, they’re updated.  We’ve swapped the laser discs for more modern DVDs.”  Rubin asked about BRC’s Shuttle Launch Experience.  “We did consider integrating that, but guests will actually be participating in a real launch.”

As part of the training segment of the attraction, acclaimed cinematographer James Neihouse, ASC will create a five minute video teaching guests how to film their own experience using IMAX film cameras.

The second phase of the new attraction will be an actual space shuttle flight to the soon to be decommissioned International Space Station.  Bolden explains, “We wanted this part to be campy, so we’re theming it to the classic film “Space Camp.”  Phil Hettema of The Hettema Group was contacted by Bolden’s office and immediately jumped at the opportunity to work on this part of the project.  In an email, he explained the launch section in more detail: “When we completed the High Roller and One World Observatory, we wanted to go higher, but realized we had nowhere else to go until Charlie called us with this unprecedented opportunity.  We will soon begin filming interactive video with Leah Thompson and Jinx the Robot, resuming their roles of Kathryn Fairly and Jinx the Robot from the film.   They will explain to guests principles such as weightlessness and massive g-forces in a fun and meaningless way as they soar towards the Space Station.”

According to Bolden, the retired space shuttles Endeavor and Discovery, currently on display at the California Science Center and the Smithsonian’s National Air and Space Museum, have been secretly undergoing refurbishment for the past three months and will soon be recommissioned as the shuttles used in the new attraction.  As NASA no longer has any 747 Shuttle Carrier Aircraft, once the shuttles are fully operational, they will be moved by robotic crawler to the Kennedy Space Center for testing, with the transport of each shuttle expected to take two to three years.   An additional six years will be needed to modify the Vehicle Assembly Building and Shuttle Assembly facilities to their configurations prior to the end of the shuttle program.  Three more years will be needed for full shuttle testing.

Once on board the ISS, things will go horribly wrong as a xenomorph from the movie “Alien” hunts down attraction guests in the tight ISS corridors.  Rethink Leisure & Entertainment is joining forces with 20th Century Fox to make this as frightening and realistic an experience as possible.  Although details will not be released until further in the design process, Scott Ault of Rethink confirmed to InPark that not only is this portion of the attraction being designed simultaneously with an “Aliens” attraction in Dubai, but “the goal [for the NASA attraction] is for all guests, except for one, to make it out alive.”

Once outside walking in space, guests will be bombarded by blasts as fragments of the ISS begin to rip off, placing their lives in imminent danger.  They will have no choice but to make their way to the opposite side of the station and board a Soviet escape capsule.  This segment of the attraction, based on the Warner Bros film “Gravity,” is being produced by Thinkwell Group.  Thinkwell’s Craig Hanna told InPark via skype, “We love doing attractions for Warner Bros.  We wish all we did was Warner Bros.  But since they wouldn’t let us create an attraction around ‘The Intern,’ we’re very excited to have gotten this instead.”

Bolden believes that the $80 million admission price will have the attraction paying for itself within thirty years.  The estimated length of experience will vary between four hours and three years, depending on where guests crash land.

Joe Kleimanhttp://wwww.themedreality.com
Raised in San Diego on theme parks, zoos, and IMAX films, InPark's Senior Correspondent Joe Kleiman would expand his childhood loves into two decades as a projectionist and theater director within the giant screen industry. In addition to his work in commercial and museum operations, Joe has volunteered his time to animal husbandry at leading facilities in California and Texas and has played a leading management role for a number of performing arts companies. Joe previously served as News Editor and has remained a contributing author to InPark Magazine since 2011. HIs writing has also appeared in Sound & Communications, LF Examiner, Jim Hill Media, The Planetarian, Behind the Thrills, and MiceChat His blog, ThemedReality.com takes an unconventional look at the attractions industry. Follow on twitter @ThemesRenewed Joe lives in Sacramento, California with his wife, dog, and a ghost.
Share
Facebook
Twitter
Linkedin
Email
Print
WhatsApp
Pinterest
ReddIt
Tumblr
Previous articleAlcorn McBride’s Steve Alcorn on THE FIVE SPOT: 30 Years in Five Questions
Next articleRemembering Peter Chernack, 1948-2016