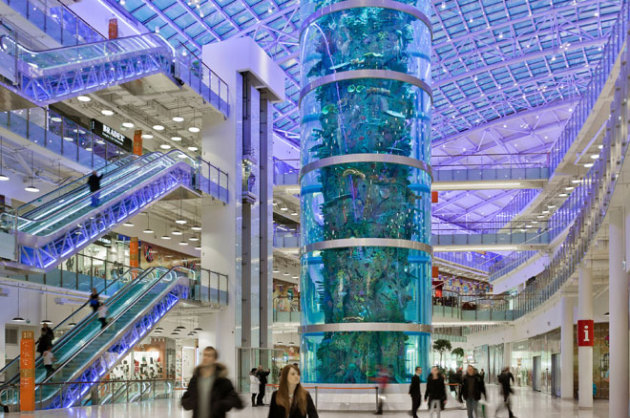 Grand Junction, CO, USA — For many a mind’s eye, Moscow is linked to images of historic Yaroslavl domes and perma-frosted windows. However, the city of the Red Square is now home to the largest indoor shopping mall in all of Europe—Avia Park. The principal landmark at Avia is nothing less than the tallest cylindrical aquarium in the world—a raised transparent column, filled with thousands of gallons of ocean, and constructed of R-Cast acrylic.

Visually, the aquarium at Avia Park can be described as four stories of animated sculpture, home to 2,500 specimens of fish and majestic, spiraling Red Sea reef. Structurally, however, the attraction is more a model of precise engineering than aesthetic craft. What appears to be a single column actually consists of 21 separate panels of R-Cast chemically bonded into seven sections that weigh as much as 13 tons each.

All told, the aquarium is 75 feet tall, 20 feet in diameter and holds 98,000 gallons of salt water. To contain such pressure, the walls were engineered to be up to eight inches thick, requiring a total of 55 metric tons of acrylic. “The tank is deep enough to require decompression stops for the divers who clean it,” explained George Papoutsoglou, Sales Representative for RPT. “This is no run-of-the-mill project, even by RPT standards. Avia Park is extraordinary.”

“This project involved the world’s tallest cylindrical aquarium in Europe’s largest mall in Russia’s largest city,” said Matt Houlihan, Vice President of RPT. “This is the type of high-profile project that our team excels in. I truly believe Reynolds Polymer Technology to be the most dynamic company in the industry.”

The aquarium project was produced by International Concept Management, a renowned firm that has partnered with RPT on several projects in the past including the AquaDom, Scheels All Sports, and Morocco Mall.

In its US manufacturing plant, RPT has already realized an increase in the amount of monolithic acrylic that is being produced, both as a result of the recent expansion and in response to industry demand. Because RPT is committed to providing customers with superior quality R-Cast acrylic, every piece of product is tested using the Differential Scanning Calorimeter (DSC) and Dynamic Mechanical Analyzer (DMA), allowing laboratory technicians to constantly evaluate polymer grade. Test results will be used to assist in autoclave success and improve material performance during the polymerization and thermoforming process. This objective information will also serve as a supplementary layer of quality control.

Preliminary research to further improve the production process has also begun. The Dielectric Analyzer runs tests to monitor autoclave efficiency. Lab technicians are confident in designing a new system that will increase efficiency and decrease production time. In an effort to stay “way beyond ordinary,” other projects will include experimenting with next generation resins and chemical redesigns to develop new, more robust polymer properties.

“The future of Reynolds Polymer Technology will greatly benefit from our investment in this new technological resource,” commented Mark Johnson, Vice President of Business Development, “with the amount of large projects on our plate it will be monumental to develop faster production processes while maintaining optimal quality standards.”

Joe Kleimanhttp://wwww.themedreality.com
Raised in San Diego on theme parks, zoos, and IMAX films, InPark's Senior Correspondent Joe Kleiman would expand his childhood loves into two decades as a projectionist and theater director within the giant screen industry. In addition to his work in commercial and museum operations, Joe has volunteered his time to animal husbandry at leading facilities in California and Texas and has played a leading management role for a number of performing arts companies. Joe previously served as News Editor and has remained a contributing author to InPark Magazine since 2011. HIs writing has also appeared in Sound & Communications, LF Examiner, Jim Hill Media, The Planetarian, Behind the Thrills, and MiceChat His blog, ThemedReality.com takes an unconventional look at the attractions industry. Follow on twitter @ThemesRenewed Joe lives in Sacramento, California with his wife, dog, and a ghost.
Share
Facebook
Twitter
Linkedin
Email
Print
WhatsApp
Pinterest
ReddIt
Tumblr
Previous articleGSCA Announces 2015 Officers and Chairs
Next articleCornell Theme Park Engineering Group Calling for Entries for Entrepreneur Competition