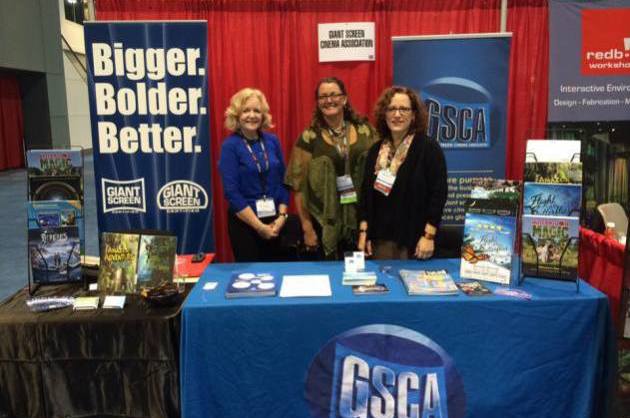 ABOVE: L to R: The GSCA’s Eileen Pheiffer, Tammy Seldon, and Kelly Germain at ASTC 2014.

Holly Springs, NC, USA — The Giant Screen Cinema Association (GSCA) is pleased to announce the 2015 officers elected by the GSCA board of directors, as well as chairs appointed to GSCA committees.

The GSCA 2015 Governance Committee includes Jonathan Barker of SK Films, who will also serve as Chair of that committee; Gordon Stalans of the Tennessee Aquarium; Diane Carlson of the Pacific Science Center; Kim Cavendish of the Museum of Discovery and Science; and Laurent Dondey of La Geode.

The 2015 Committee Chairs are as follows. The Conference Committee will be co-chaired by Glenn Shaver of the Ontario Science Centre and Tammy Seldon, GSCA’s Executive Director. Derek Threinen of Giant Screen Films/D3D Cinema will chair the Marketing and Member Services Committee. The Technical Committee Chairs are Tim Hazlehurst of Marbles Kids Museum and Martin Howe of TEQ4. Daniel Ferguson of Cosmic Picture and Andy Zakrajsek from COSI will chair the Professional Development Committee. And the Lifelong Learning Committee will be chaired by Alan Nursall of the TELUS World of Science-Edmonton.

The GSCA Board has also appointed Andrew Oran of FotoKem to fill the board seat vacated by Rick Gordon of RPG Productions, who submitted his resignation to the GSCA board in December. Oran will serve the remaining year of Gordon’s term through 2015.

As previously announced, the following were elected to the 2015 GSCA board of directors:

They will join the following board members, who still have one year left on their board term:

Joe Kleimanhttp://wwww.themedreality.com
Raised in San Diego on theme parks, zoos, and IMAX films, InPark's Senior Correspondent Joe Kleiman would expand his childhood loves into two decades as a projectionist and theater director within the giant screen industry. In addition to his work in commercial and museum operations, Joe has volunteered his time to animal husbandry at leading facilities in California and Texas and has played a leading management role for a number of performing arts companies. Joe previously served as News Editor and has remained a contributing author to InPark Magazine since 2011. HIs writing has also appeared in Sound & Communications, LF Examiner, Jim Hill Media, The Planetarian, Behind the Thrills, and MiceChat His blog, ThemedReality.com takes an unconventional look at the attractions industry. Follow on twitter @ThemesRenewed Joe lives in Sacramento, California with his wife, dog, and a ghost.
Share
Facebook
Twitter
Linkedin
Email
Print
WhatsApp
Pinterest
ReddIt
Tumblr
Previous articleGiant Screen Film “Journey to Space” Unveils Poster and Trailer
Next articleReynold’s Polymer Builds World’s Tallest Cylindrical Aquarium in Moscow