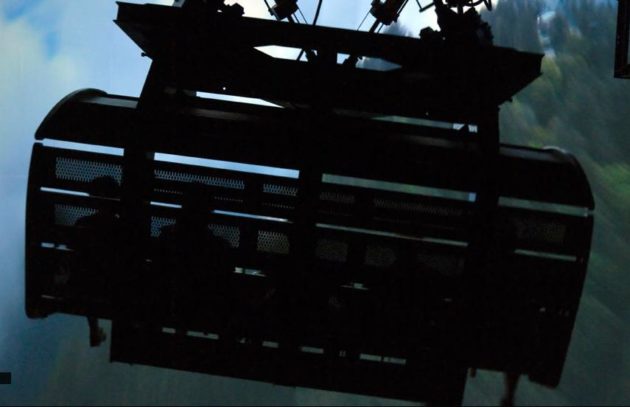 [quote]We looked at four systems from four different providers, each with their own take on achieving the wow factor. The basic challenge: remove the floor and place viewers in the middle of the action.[/quote]

[dropcap color=”#888″ type=”square”]P[/dropcap]art giant screen cinema, part motion simulator, part 4D theater: The flying or suspended theater allows riders unobstructed views of sweeping landscapes or perhaps a more thrilling mission with a superhero or other storyline. In these theaters you will find seating layouts a bit more out of the ordinary than your typical stadium seating at the local cinema. Vertically stacked or steeply raked seating arrangements allow guests’ legs to dangle for that ultimate sensation of flight. Mix in seat motion and add cues such as wind, scent, or water spray for a more complete sensory overload. We looked at four systems from four different providers, each with their own take on achieving the wow factor. The basic challenge: remove the floor and place viewers in the middle of the action.

With plenty of experience in this style of attraction, Dynamic Attractions brings their True Flight Motion and tilting load platform concept to venues around the world. The basic operating principle of their Flying Theater involves a single level load platform which has a load/unload benefit as George Walker, VP Creative Development explains. “Because ours loads like a theater, guests just intuitively know what to do.”

When the show begins the entire load platform rotates 90 degrees along with riders’ seats pivoting. Walker described the inspiration behind this transition effect. “Our approach recreates the sensation that one would feel if they took a running jump off a cliff and then began to hang-glide from there. This leaping configuration causes that little sensation that makes the hairs on your neck stand up. It makes the experience exhilarating.”

Electric motors control the action, beginning with the tilt, then the upward/downward heave which has been tweaked over time. “The ability to flutter and fluctuate the motion is also better than ever before,” says Walker. “This gives us the ability to really synchronize the sensations with the show on the screen.”

With multiple ride systems currently in operation and several more on the way, Dynamic Attractions is already looking to the future. “We are exploring many different configurations, new interactive technologies, viewing angles, and different motion profiles coupled with content to deliver physical sensations that push the envelope and go way beyond mere flying sensations,” says Walker. 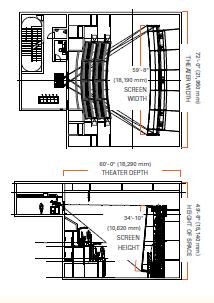 Also having claim to history with a considerable range of flight and simulator attractions is SimEx-Iwerks, their latest offering dubbed SkyRide. In this setup, guests find themselves at one or more levels for boarding. Stephen Li, Sales Support Manager at SimEx offered the fundamentals. “SkyRide flight system is designed with 1 to 3 vertical tiers of seating, each with dropaway flooring and railing to produce an unobstructed view of a large screen. This method was chosen to accommodate smaller venues and to eliminate building ceiling height restrictions.”

A menu of 4D effects is included with each five-seat vehicle base where no additional support is necessary. Electric motors power the seat motion to provide three degrees of freedom. “Over the years SimEx-Iwerks has developed multiple hardware platforms which when matched to a custom travelogue film, gives the rider a single point of view flying experience specific to a client’s destination location.”

The motion seats are fabricated in Canada and installed on site. Flying attractions are about serenity and gentle swooping motion, but Li mentions SkyRide can have varying – and more intense – ride profiles besides simulating flight – “programming flexibility allows for both smooth and more aggressive ride profile as the film demands” – good news for those who enjoy more thrilling ride action. 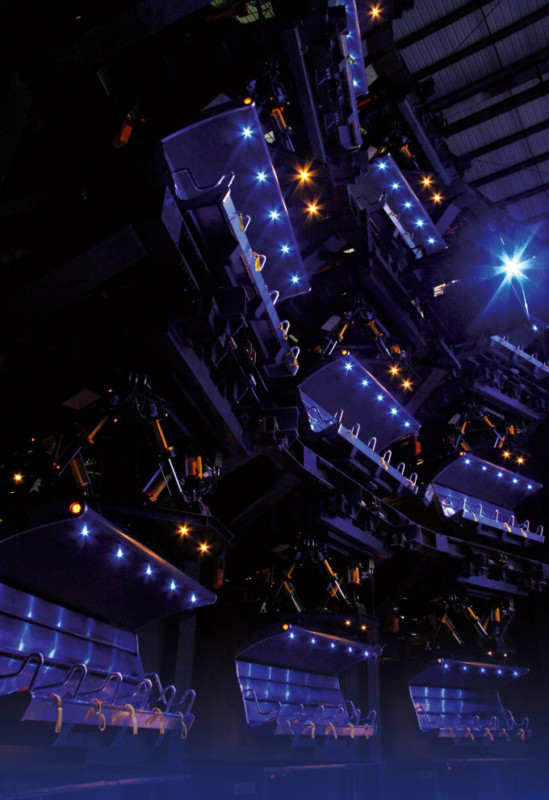 “It can be configured to be mild or more dynamic/thrilling,” says Nathan Jones, Vekoma Rides Vice President of Sales & Marketing, North America. “This is, however, to a large extent determined by content and what you want your audience to experience. Content and motion need to be in sync. i-ride is so agile that it can make the audience feel like they are turning/spinning around or even upside down!”

Once the show begins, vehicles project toward the screen and leave the floor behind, as Jones explains. “The motion carriers slide out into the dome screen. The units on the side are appropriately angled along with units on higher/lower levels which are tilted down/up to focus on the center of the screen. The extension of each platform is quite extensive and leaves any person in the audience fully immersed in the domed screen.” More installations are already on the way around the world.

If you were at the IAAPA Attractions Expo in November 2015, you may have seen the Suspended Theater on show,a joint endeavor of Falcon’s Creative Group, Oceaneering Entertainment Systems and Kraftwerk Living Technologies.

One of the essential features of the patented Suspended Theater is the concealment of the large screen during the load process. Utilizing single level loading, guests find their seats. Eventually the ceiling disappears, seats begin to rise, and the big picture is revealed (literally). The “suspended” part comes from an overhead frame that supports the seats below. A cable and pulley system elevates seats to a stacked arrangement for the final viewing position. Three degrees of freedom are capable along with other effects found in similar designs.

The visionary spark for this team effort came from Cecil Magpuri, president and chief creative officer of Falcon’s. Clifford Jennings was the lead concept designer for Oceaneering for the mechanical designs. According to Matt Kent, head of creative services at Oceaneering, “Cliff is an avid modeler in his spare time, and he personally designed, built and programmed the fully-functional model we displayed at IAAPA.”

Kent explained each company’s role in the theater package. “Falcon’s Licensing holds the patent for the basic operational intent of the Suspended Theater concept. Falcon’s Treehouse, in most situations, acts as the lead Creative Designer, Media Producer and overall Show Producer for these attractions. Oceaneering is responsible for the design and engineering of the mechanical aspects of the ride system, performs the production, assembly, testing and commissioning of all of the moving components. Kraftwerk Living Technologies GmbH provides technical direction on A/V design and also provides all A/V hardware and software.” 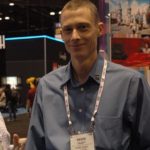 Kevin Dazey ([email protected]) works in R&D at a manufacturing company and has a Bachelor’s degree in Mechanical Engineering from Wright State University. He enjoys hearing the stories behind the rides and someday would like to transition to working in the attractions industry.

Joe Kleimanhttp://wwww.themedreality.com
Raised in San Diego on theme parks, zoos, and IMAX films, Joe Kleiman would expand his childhood loves into two decades as a projectionist and theater director within the giant screen industry. In addition to his work in commercial and museum operations, Joe has volunteered his time to animal husbandry at leading facilities in California and Texas and has played a leading management role for a number of performing arts companies. Joe has been News Editor and contributing author to InPark Magazine since 2011. HIs writing has also appeared in Sound & Communications, LF Examiner, Jim Hill Media, and MiceChat. His blog, ThemedReality.com takes an unconventional look at the attractions industry. Follow on twitter @ThemesRenewed Joe lives in Sacramento, California with his fiancé, two dogs, and a ghost.
Share
Facebook
Twitter
Linkedin
Email
Print
WhatsApp
Pinterest
ReddIt
Tumblr
Previous article飞行影院的承载系统
Next article准备启航