Although the project has not been officially announced, Ripley Entertainment has posted a job listing on the IAAPA website for an Operations Manager in Baltimore, MD, USA.  According to the posting, the position “oversees all aspects of the attraction including its activities and the relationships between the attraction and the corporate office, guests, employees, community and local government.”

It has been no secret in Baltimore that Ripley has been planning to enter the market.  On June 16, 2011, the Baltimore Sun and television station WBAL reported that Ripley was in talks for a Ripley’s Believe it or Not Odditorium to be added to the Harborside shopping center on the city’s famous Inner Harbor.  Both pieces cited unnamed sources.

The project has not been able to proceed without approval on the attraction’s facade and exterior signage from Baltimore’s Urban Design and Architecture Review Panel (UDARP).  Ripley Entertainment is famous for the whimsical exteriors that grace the company’s Odditoriums worldwide.  For the Baltimore location, the company chose “Chessie,” the sea serpent, in the tradition of the Loch Ness Monster, said to reside in Chesapeake Bay.

On August 18, 2011, a proposal for the project was presented to UDARP by Brown Craig Turner Architects, who had also provided planning, design, architecture, and graphics for the city’s Power Plant Live retail and entertainment complex.  According to the meeting minutes, Ripley plans to occupy 13,000 feet on two floors at Harborside’s Light Street Pavilion.

The Panel issued a number of concerns, including that the signage might be “too large and overpowering” for the existing structure and that there might be a potential conflict with “the iconography of Chessie destroying a sailing ship near where the Constellation is being preserved and exhibited.”

On October 13, 2011, Ripley’s Designer Gregg Dean presented a revised entrance that greatly reduced the height of the facade and eliminated the sailing vessel (illustrations shown here are those submitted to UDARP by the designers).  Additionally, the color scheme was modified to better blend in with the rest of the existing structure. 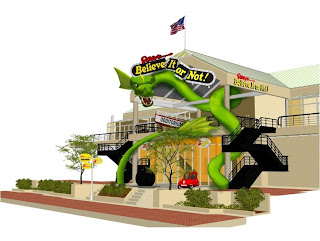 Minutes for this meeting show the Panel’s main issue continued to be that “the scale and content of the main sign continues to dominate the waterfront façade of the Pavilion and creates a precedent that could lead other tenants to request signage of similar graphic intensity and scale.“

In addition to the Baltimore project, Ripley’s Believe it or Not Odditorium in Hollywood, CA recently reopened following an extensive “extremely-odd-unusual-maniacal makeover.”  New exhibits include:

Joe Kleimanhttp://wwww.themedreality.com
Raised in San Diego on theme parks, zoos, and IMAX films, Joe Kleiman would expand his childhood loves into two decades as a projectionist and theater director within the giant screen industry. In addition to his work in commercial and museum operations, Joe has volunteered his time to animal husbandry at leading facilities in California and Texas and has played a leading management role for a number of performing arts companies. Joe has been News Editor and contributing author to InPark Magazine since 2011. HIs writing has also appeared in Sound & Communications, LF Examiner, Jim Hill Media, and MiceChat. His blog, ThemedReality.com takes an unconventional look at the attractions industry. Follow on twitter @ThemesRenewed Joe lives in Sacramento, California with his fiancé, two dogs, and a ghost.
Share
Facebook
Twitter
Linkedin
Email
Print
WhatsApp
Pinterest
ReddIt
Tumblr
Previous articleLes Petits Francais Takes Mexico to the Thea’s
Next articleBusch Gardens Tampa’s Newest Attraction Showcases Veterinary Medicine