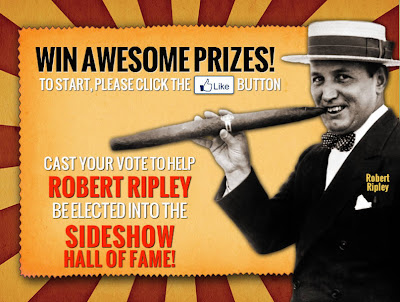 Orlando, FL, USA (March 31, 2012) /PRWEB/ —  Robert Ripley, among the first to bring the strange and unusual to the masses with his odditoriums and his cartoon panel “Believe It or Not!,” has been nominated for Coney Island’s prestigious Sideshow Hall of Fame.

Voting will take place on Friday, April 13, during the first night of the 10-day Congress of Curious Peoples, sponsored by Coney Island USA.

“It is due time Rip makes it into the hall of fame, after narrowly missing it the last two years,” said Tim O’Brien, VP Communications for Ripley Entertainment Inc. “We are going all out this year and plan to pull all the punches we can to make sure he gets elected.”

He also starred in his own radio show and later his own television show – being a pioneer in both mediums – all while living in New York.

Today, the country’s largest Believe It or Not! Odditorum operates in New York City’s Times Square. “We are proudly carrying on the Ripley tradition on a daily basis,” said Michael Hirsch of the New York Odditorium. “Ripley would be proud of what we are doing, and we are working hard to get him into the Hall of Fame, he certainly deserves it.”

The opening night event, being sponsored by Ripley’s Believe It or Not! will feature a show by the Lizardman, a popular entertainer at Ripley’s odditoriums worldwide. His show will be followed by nominating speeches and then the official vote.

Ripley’s is taking no chances this year and is having its own voting process, beginning on April 1 on the Ripley’s Believe It or Not! Facebook pages. For 13 days, fans can vote for Ripley and at the same time become eligible for Believe It or Not! prize packages. Voting results will then be presented to the judges on April 13 in an attempt to persuade them of Ripley’s popularity.

Joe Kleimanhttp://wwww.themedreality.com
Raised in San Diego on theme parks, zoos, and IMAX films, Joe Kleiman would expand his childhood loves into two decades as a projectionist and theater director within the giant screen industry. In addition to his work in commercial and museum operations, Joe has volunteered his time to animal husbandry at leading facilities in California and Texas and has played a leading management role for a number of performing arts companies. Joe has been News Editor and contributing author to InPark Magazine since 2011. HIs writing has also appeared in Sound & Communications, LF Examiner, Jim Hill Media, and MiceChat. His blog, ThemedReality.com takes an unconventional look at the attractions industry. Follow on twitter @ThemesRenewed Joe lives in Sacramento, California with his fiancé, two dogs, and a ghost.
Share
Facebook
Twitter
Linkedin
Email
Print
WhatsApp
Pinterest
ReddIt
Tumblr
Previous articleVIDEOS for Week Ending 3/31/2012
Next articleMerlin to Open Multi-brand Resort in Sprotsolovlia