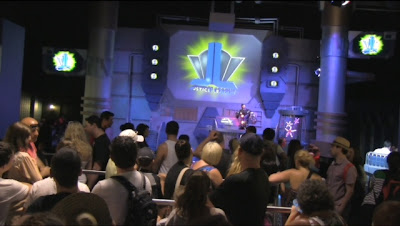 Oxenford, Australia — Sally Corporation’s new, action-packed interactive dark ride, Justice League: Alien Invasion 3D, was unveiled on September 22 at Warner Bros. Movie World, on Australia’s Gold Coast, bringing the world’s most famous super heroes to life…battling alongside park guests in an epic fight to defeat one of the most feared villains in the DC Universe. A large crowd waited in line for the much-anticipated opening, excitedly participating in the epic battle.

The Sally team worked closely with Warner Bros. Consumer Products and DC Entertainment, to create this dynamic adventure featuring Superman, Batman, Wonder Woman, The Flash, Green Lantern, and Supergirl in a fight to save Earth from destruction. They are aided by the amazing Cyborg who recruits guests for the volunteer force and demonstrates how to defeat the alien spores that are attacking citizens in cities throughout the world.

The exterior of the 2,000 square meter building is themed as the Hall of Justice. As they enter, visitors are immediately immersed in the story of the alien attack via a “live” newscast anchored by Vicki Vale, who urges viewers to take shelter at Justice League embassies worldwide, and to help defend Earth against the alien threat. 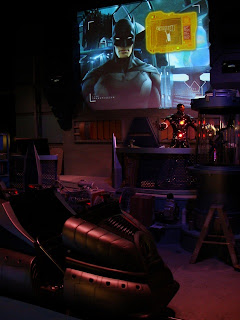 Passing through a high-tech scanning device into the pre-show area, guests discover the animatronic Cyborg in his test lab, and Batman beaming in from the Justice League Watchtower Command Center, in orbit around the Earth. Once aboard their custom tactical assault vehicles, riders are teleported into the dark streets of Gotham City and join the Justice League in an epic battle. Scores are recorded on in-car consoles.

“Our goal was to create a ride based on the Justice League heroes that could be a fun and exciting experience not only for hardcore fans of the franchise, but also those not so familiar with the characters,” says Sally Corporation CEO John Wood. “There’s a lot of action and interaction throughout the ride, and you’re immersed in the experience. There are full-scale three-dimensional sets, scenery, animatronics and special effects throughout, and blended into the city streets and spaceship interiors are high-definition CGI animated sets and characters…allowing us to take the action to new heights.” 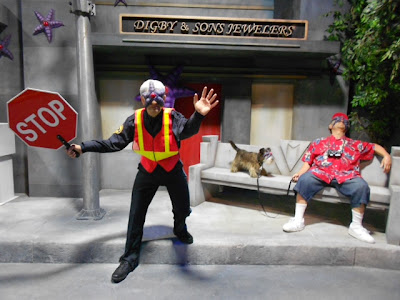 JUSTICE LEAGUE and all related characters and elements are trademarks of and © DC Comics. (s12)

About DC Entertainment
DC Entertainment, home to iconic brands DC Comics (Superman, Batman, Green Lantern, Wonder Woman, The Flash), Vertigo (Sandman, Fables) and MAD, is the creative division charged with strategically integrating its content across Warner Bros. Entertainment and Time Warner. DC Entertainment works in concert with many key Warner Bros. divisions to un leash its stories and characters across all media, including but not limited to film, television, consumer products, home entertainment and interactive games. Publishing thousands of comic books, graphic novels and magazines each year, DC Entertainment is the largest English-language publisher of comics in the world. In January 2012, DC Entertainment, in collaboration with Warner Bros. and Time-Warner divisions, launched We Can Be Heroes–a giving campaign featuring the iconic Justice League super heroes–to raise awareness and funds to fight the hunger crisis in the Horn of Africa.

Joe Kleimanhttp://wwww.themedreality.com
Raised in San Diego on theme parks, zoos, and IMAX films, InPark's Senior Correspondent Joe Kleiman would expand his childhood loves into two decades as a projectionist and theater director within the giant screen industry. In addition to his work in commercial and museum operations, Joe has volunteered his time to animal husbandry at leading facilities in California and Texas and has played a leading management role for a number of performing arts companies. Joe previously served as News Editor and has remained a contributing author to InPark Magazine since 2011. HIs writing has also appeared in Sound & Communications, LF Examiner, Jim Hill Media, The Planetarian, Behind the Thrills, and MiceChat His blog, ThemedReality.com takes an unconventional look at the attractions industry. Follow on twitter @ThemesRenewed Joe lives in Sacramento, California with his wife, dog, and a ghost.
Share
Facebook
Twitter
Linkedin
Email
Print
WhatsApp
Pinterest
ReddIt
Tumblr
Previous article
Gaylord Entertainment Renamed Ryman Hospitality; Marriott Now Managing Ryman Hotels and Nashville Attractions
Next article
Miziker Entertainment Brings Resident Evil to Terrorize Universal Studios Japan