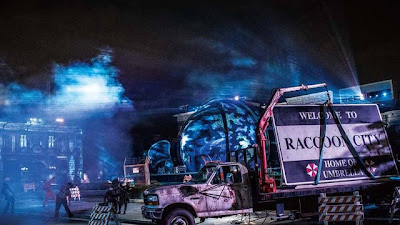 Osaka, Japan — Miziker Entertainment has turned Gramercy Park at Universal Studios Japan into “Raccoon City” from Capcom’s Resident Evil game franchise, and created a live event inside the Terminator 2:3D theater, with all new sound design, video segments, and a horror maze. The cast of 35 includes stunt performers, actors, zombie contortionists, parkour “freerunners”, and costumed creatures that emerge from the darkness.
Outside, there are over 200 feet of animated architectural projection mapping generated by 32 20K projectors mounted on rooftops. The sound design from the Dreams Are Universal stage and parade route is all original. 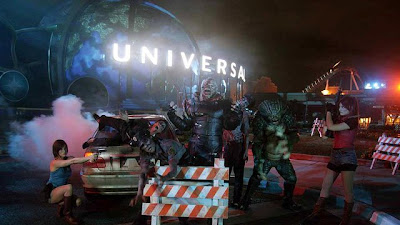 The park has seen over 40,000 guests at 6pm each night and Biohazard runs from now until November 11 as part of Halloween Horror Nights. The maze is designed for 1600 guests per hour, in groups of 200.
Biohazard has a huge fan base in Japan and Miziker Entertainment worked closely with Capcom to bring the world of the video games to life.
www.miziker.com

Joe Kleimanhttp://wwww.themedreality.com
Raised in San Diego on theme parks, zoos, and IMAX films, Joe Kleiman would expand his childhood loves into two decades as a projectionist and theater director within the giant screen industry. In addition to his work in commercial and museum operations, Joe has volunteered his time to animal husbandry at leading facilities in California and Texas and has played a leading management role for a number of performing arts companies. Joe has been News Editor and contributing author to InPark Magazine since 2011. HIs writing has also appeared in Sound & Communications, LF Examiner, Jim Hill Media, and MiceChat. His blog, ThemedReality.com takes an unconventional look at the attractions industry. Follow on twitter @ThemesRenewed Joe lives in Sacramento, California with his fiancé, two dogs, and a ghost.
Share
Facebook
Twitter
Linkedin
Email
Print
WhatsApp
Pinterest
ReddIt
Tumblr
Previous articleSally and Warner Bros Movie World Bring the Justice League to Life in Australia
Next articleVillage Roadshow Announces the Return of Wet ‘n’ Wild to Las Vegas