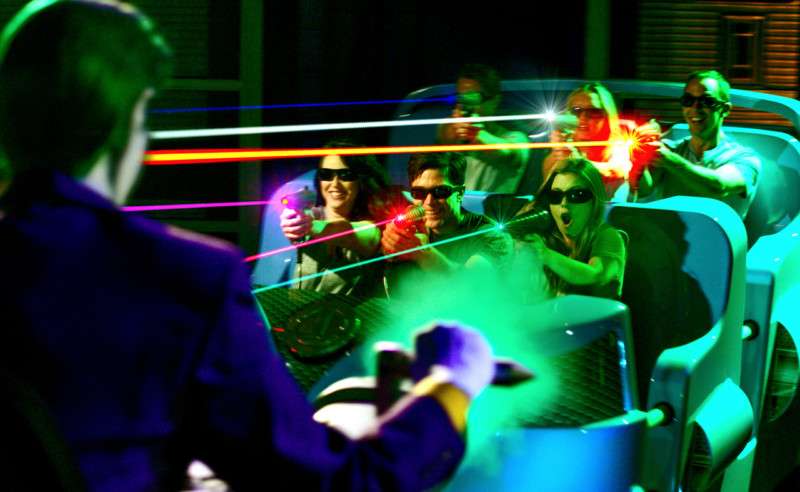 JUSTICE LEAGUE: Battle for Metropolis, Sally Corporation’s dark ride project for Six Flags Entertainment Corporation, was awarded the prestigious Thea Award for Outstanding Achievement.  Given by the Themed Entertainment Association, it’s one of the industry’s greatest honors representing some of the finest achievements in the creation of compelling places and experiences.  Already an industry award-winner, the mixed-media ride took home IAAPA’s Best New Product and the Impact Award in 2015, from rides at Six Flags Over Texas and Six Flags St. Louis.  The seventh iteration, at Six Flags Magic Mountain is accepting the Thea award in April.

JUSTICE LEAGUE bridges the gap between a classic dark ride and thrill ride, making it a perfect fit for Six Flags, as they aim to satisfy their family demographic. The TEA Thea Awards Committee wrote, “Narrative-based, full immersion storytelling is an impressive new direction within a park system better known for iron rides – while staying true to the Six Flags brand.”

“We are thrilled and humbled to receive this amazing recognition,” said Six Flags Magic Mountain Park President Neal Thurman. “JUSTICE LEAGUE: Battle for Metropolis has been a game-changer for our Company.  Known the world over for our record-breaking roller coasters, this thrilling, dark ride introduced a completely new level of innovation with the most sophisticated technology available. The response from guests and industry experts alike has been nothing short of spectacular and we look forward to accepting the TEA Thea award in Anaheim next spring.” 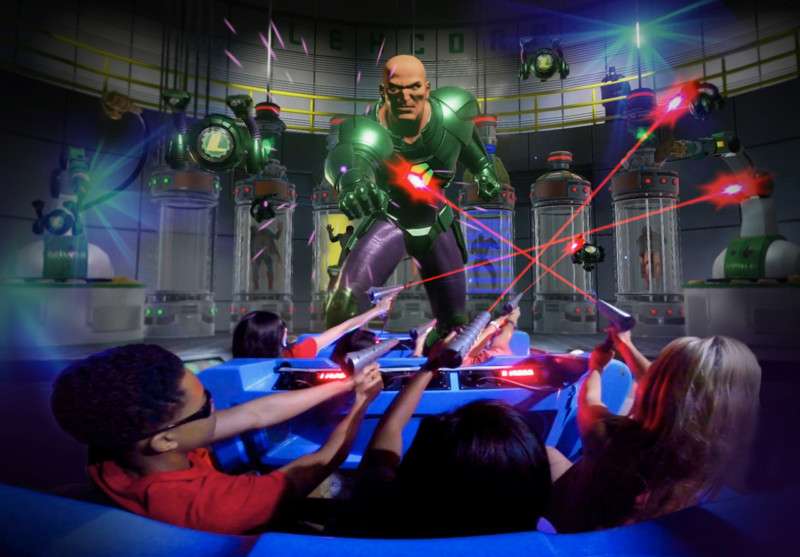 Six Flags, in partnership with Warner Bros. Consumer Products,DC Entertainments, called on Sally Corporation to lead the charge in the design and build of the seven JUSTICE LEAGUE attractions.  Sally managed a “super-hero team” of subcontractors to complete the project. Alterface, Oceaneering Entertainment Systems, Wyatt Design Group, Techni-Lux, Inc., Pure Imagination Studios, RealD, and Forté Construction, and several others are being recognized for their work on the project. Rich Hill, lead designer of JUSTICE LEAGUE: Battle for Metropolis and Creative Director for Sally Corporation states, “None of this would have been achieved without the super-hero team of artists, engineers and technicians Sally enlisted to complete this monumental mission. Congratulations to everyone who helped bring this over-the-top theme park attraction to life!

“This all started 5 years ago as a promise Sally made to Six Flags to bring world-class storytelling experiences to their guests.  We are overjoyed to see that the industry we love so much feels that we delivered on that promise.  We like to think that moving forward, the seven JUSTICE LEAGUE dark rides we designed and built for the Six Flags chain will set a new bar for the level of quality, excitement and fun a regional park can offer in a family attraction.”

From hundreds of nominations received, the Awards Committee deliberated at length to produce the annual slate of recipients, which was then submitted to the TEA International Board of Directors for approval.  While the TEA Thea Awards recipients are announced each November, they are formally awarded the following spring where nearly 1,000 entertainment professionals converge on the Los Angeles area for the elegant TEA Thea Awards Gala.

John Wood, Chairman & CEO of Sally Corporation concludes, “Winning a Thea Award for Magic Mountain’s JUSTICE LEAGUE: Battle for Metropolis is amongst the highest honors an attraction producer like Sally Corporation can receive.  We are delighted that Six Flags Corporation is recognized for its bold move into the themed entertainment arena with such an advanced and highly acclaimed dark ride attraction.  Being recognized by your peer professionals for this great achievement makes it all that more special!”

Joe Kleimanhttp://wwww.themedreality.com
Raised in San Diego on theme parks, zoos, and IMAX films, InPark's Senior Correspondent Joe Kleiman would expand his childhood loves into two decades as a projectionist and theater director within the giant screen industry. In addition to his work in commercial and museum operations, Joe has volunteered his time to animal husbandry at leading facilities in California and Texas and has played a leading management role for a number of performing arts companies. Joe previously served as News Editor and has remained a contributing author to InPark Magazine since 2011. HIs writing has also appeared in Sound & Communications, LF Examiner, Jim Hill Media, The Planetarian, Behind the Thrills, and MiceChat His blog, ThemedReality.com takes an unconventional look at the attractions industry. Follow on twitter @ThemesRenewed Joe lives in Sacramento, California with his wife, dog, and a ghost.
Share
Facebook
Twitter
Linkedin
Email
Print
WhatsApp
Pinterest
ReddIt
Tumblr
Previous articleMeow Wolf announces Washington D.C. as newest host city for interactive experiential art exhibit
Next articleRyan Reynolds returns to Canadian roots as narrator of MacGillivray Freeman distributed “Great Bear Rainforest”