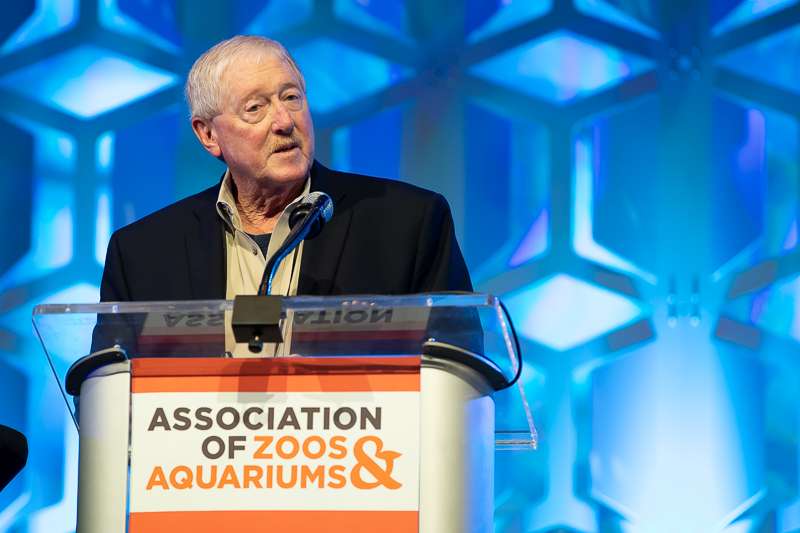 Former San Antonio Zoo director, J. Stephen (Steve) McCusker, has been named the 2018 recipient of the prestigious R. Marlin Perkins Award for Professional Excellence by the Association of Zoos and Aquariums (AZA). The AZA presented the honor to Steve McCusker during AZA’s annual conference last week in Seattle.

McCusker had a long and prestigious career in the zoological field.  He served as the executive director of San Antonio Zoological Gardens for twenty years, retiring in 2014. Prior to his position at San Antonio Zoo, he held positions at three other AZA-accredited institutions, including the Fort Worth Zoo, Oregon Zoo, and Reid Park Zoo.

During his four-decade long career in the zoological industry, McCusker served on numerous AZA committees, including the Accreditation Commission, Animal Health Committee, Membership Committee, and Board of Regents. During his tenure as the AZA Board Chair, McCusker initiated the first annual Director’s Policy Conference, enabling zoo and aquarium executives to meet and discuss the challenges and opportunities before their profession. The Director’s Policy Conference is now considered one of AZA’s pillar programs.

“Steve McCusker’s entire life has revolved around animals and he has always displayed a passion for bringing people closer to wildlife” said Tim Morrow, CEO and Executive Director of San Antonio Zoo.  “It is particularly fitting that he received the Marlin Perkins Award because like Marlin Perkins, Steve dedicated his career to wildlife, conservation and education. At San Antonio Zoo Steve changed the way guests experience the zoo through the creation of Africa Live, Kronkosky’s Tiny Tot Nature Spot, Lory Landing, and Gibbon Forrest.”

Established in 1978, the R. Marlin Perkins Award is the highest honor bestowed upon a zoo or aquarium professional by the AZA. In order to qualify for consideration, a candidate must unquestionably demonstrate impeccable character and hold a distinguished record of honorable service to the Association throughout his or her career; be strongly committed to education, conservation, science, recreation and the welfare of animals; and be actively involved in furthering these causes through outstanding contributions to the zoo and aquarium profession.

“Steve McCusker is a role model for the zoological profession, a distinguished leader and dedicated individual whose commitment to conservation embodies AZA’s mission,” said AZA President and CEO Dan Ashe. “Steve continues to inspire us all, and AZA is proud to honor his outstanding achievements, dedicated service, and substantial contributions to the community with our highest honor for professional excellence, the Marlin Perkins Award.”

McCusker holds a Bachelor’s from Michigan State University and a Master’s of Biology from Texas Christian University.

Additional information on the R. Marlin Perkins Award for Professional Excellence can be found at https://www.aza.org/r-marlin-perkins-award-for-professional-excellence.

Joe Kleimanhttp://wwww.themedreality.com
Raised in San Diego on theme parks, zoos, and IMAX films, InPark's Senior Correspondent Joe Kleiman would expand his childhood loves into two decades as a projectionist and theater director within the giant screen industry. In addition to his work in commercial and museum operations, Joe has volunteered his time to animal husbandry at leading facilities in California and Texas and has played a leading management role for a number of performing arts companies. Joe previously served as News Editor and has remained a contributing author to InPark Magazine since 2011. HIs writing has also appeared in Sound & Communications, LF Examiner, Jim Hill Media, The Planetarian, Behind the Thrills, and MiceChat His blog, ThemedReality.com takes an unconventional look at the attractions industry. Follow on twitter @ThemesRenewed Joe lives in Sacramento, California with his wife, dog, and a ghost.
Share
Facebook
Twitter
Linkedin
Email
Print
WhatsApp
Pinterest
ReddIt
Tumblr
Previous articleChristie provides projectors for Latin America’s biggest light festival
Next articleKen Whiting named second vice chairman at IAAPA