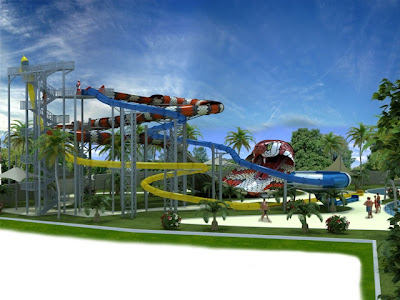 Located in the southern part of the Phetchaburi Province in central Thailand, the new waterpark, as well as the existing amusement park and retail center, is the brainchild of Supoj Tantichirasakul, chairman of Pena House Public Co. Ltd. and its subsidiary. Tantichirasakul is recognized as a leader who specializes in developing concepts that have strengthened and steadily expanded the businesses he oversees. These endeavors include Tantichirasakul’s original venture as a fashion-apparel maker, for which he is still well-recognized today. And while Tantichirasakul does not specifically handle day-to-day operations of these occupations, he nevertheless stays closely aligned with each and regularly passes along his guidance in their oversight.

Eight years ago, Pena House opened the Premium Outlet Mall at Hua Hin. As the business there grew over the years, Tantichirasakul and his group noticed changes that pointed to opportunities for additional development.

Tantichirasakul says, “The buying power of foreigners and people from Bangkok and its surrounding provinces who are coming here on weekends are varied and increasing every year.”

He says that new businesses, housing estates, condominiums and hotels have also grown around the area. “We considered it the right time to create this project to support the increase in tourists for the near future,” Tantichirasakul explains. “We dare to say that we are among the first ones to help bring growth to this area. And now it will be growing continuously.”

Tantichirasakul helped kick start that growth after he saw proof of the mall’s initial success. He then came up with the idea of developing the mall’s adjacent land as a tourist attraction: Santorini Park, an amusement park with a variety of rides, including a giant Ferris wheel and merry-go-round, and numerous shops and restaurants.

Adding the waterpark is expected to expand Santorini Park’s draw.

“Santorini Park Cha-Am’s concept has been well-considered,” Tantichirasakul says. “It is a place for tourist activity in Hua Hin during weekends. We can say that this is not a temporary campaign, since our target is the higher-end market, which has buying power. Therefore, the product, location, atmosphere, thrill rides and everything that we selected were of the highest quality, as well as being appealing. It should be looked at as a long-term project.” Tantichirasakul adds, “Of course, we are not in Bangkok, and this is a tourist town and also a through road. But I believe that this will meet everybody’s demand.”

Tantichirasakul emphasizes that his management team has given a lot of thought to the project, imagining all aspects to ensure its success. “Our management team is well-prepared,” he says. “Though this is not a 100-percent retail business, due to our experience in many big tourist cities, we decided to commit to this project.”

To ensure both Santorini Park and Santorini Water Fantasy’s success, he says they have given particular attention to details such as the marketing and overall branding. However, he says, their main focus is on quality. “Everything in the area of Santorini Park Cha-Am should look good,” he explains, adding that the new waterpark is not the end of the company’s plans for the area. “It will be expanded in due course. So the 60 rai (23.7 acres) on hand now is only our first phase. Three years from now, we can add more to meet tourists’ growing demand.” 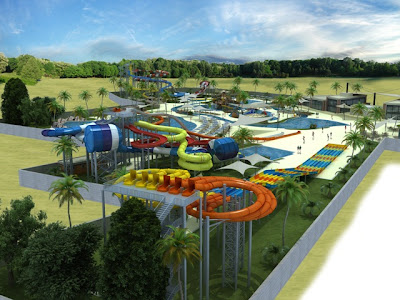 The waterpark will sit on about 4 acres (12 rai) and will require an investment of US$3.25 million (bt100 million). The existing park sits on about 8 acres (20 rai) of an existing 23.7 acres (60 rai) available. The group plans to add another 8 acres (20 rai) adjacent to the site and also build a three-star, low-rise resort with about 150 rooms. The project is expected to be completed next year.

The existing amusement park is themed after the Greek island of Santorini. More than $US1.62 million (bt50 million) was invested in the site’s architecture, sculptures and dancing fountains. It already draws as many as 10,000 visitors on its busiest weekend days. The majority of guests are from Bangkok; about 10-20 percent are tourists. The park consists of five main zones: a park, village, rest area, event area and Sunday Art Market. 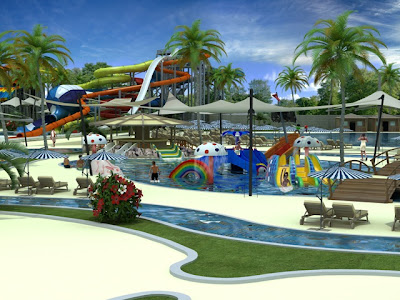 Santorini Park’s aquatic options will entice guests with innovative offerings from Polin Waterparks and Pool Systems, a world leader in the aquatics industry. The King Cobra slide will be among several rides Polin is supplying to the facility. The company also is installing three other heart-thumping attractions: a Looping Rocket, a Space Shuttle and a Windigo, among other amenities.

King Cobra. Featuring bold red, black and white scales, the ride’s imposing veneer extends along its massive 50-foot (15.24-meter) height and 260-foot (790-meter) length. The slide features fog, sound, lights and a unique configuration that enables two riders to race along a circular path of twists, turns and surprises. Riders reach speeds of up to 32 mph (51 km/h) via water pressure of 3,875 gallons (14,668 liters) per minute through open and closed tubes. The ride ends just after they endure a heart-pounding plunge of nearly 25 feet (8 meters) down a 50-degree slope.

Space Shuttle. This waterslide features an innovative design configuration, form and ride path. Fully open, fully enclosed and half-closed versions are available. Configuration options include exit via a pool or a run-out.

Windigo. Riders on mats begin this attraction within enclosed slides that transform into high-speed multi-racer lanes. It offers the flexibility of including “Kamikaze” or “Freefall” options, and its high-capacity capability will keep lines moving.

More on Pena House.
Pena House is one of Thailand’s leading retailers and manufacturers in the garment business, with more than 20 years of experience. Based on its retail expertise, the firm has created products under company-owned brands for target groups such as Ten & Co, Items and U-FO. Pena House has one of the highest rates of retail development, growth and expansion in the country, and it owns more than 20 percent of the country’s retail shopping-center space. Pena House recently has expanded from domestic retail to the international market.

More on Polin
Polin Waterparks and Pool Systems was founded in Istanbul, Turkey, in 1976 and has become one of the world’s leading companies in the design, manufacture and installation of waterparks, waterslides and water-play attractions. Polin is intimately involved in all the projects it takes on, guiding each step from concept to completion. Polin has been a pioneer in the advancement and application of closed-molded manufacturing technology in waterslide development. Since 2006, Polin has converted more than 95 percent of its annual fiberglass production to resin transfer molding (RTM). Polin offers both bowl rides and family rides featuring RTM techniques. Polin also offers its unique and patented Natural Light Effect technology, Special Pattern Effects technology in RTM and translucent RTM waterslides. Polin features a wide range of slides, including signature rides such as the patented King Cobra, Magic Spheres, Spheres, Magi Cone and Space Shuttle. Polin is committed to providing the best-quality product and service by investing in continuous research and development. The company plans to further expand its L-RTM line while introducing new signature rides and innovations. For more information, visit www.polin.com.tr.

Joe Kleimanhttp://wwww.themedreality.com
Raised in San Diego on theme parks, zoos, and IMAX films, Joe Kleiman would expand his childhood loves into two decades as a projectionist and theater director within the giant screen industry. In addition to his work in commercial and museum operations, Joe has volunteered his time to animal husbandry at leading facilities in California and Texas and has played a leading management role for a number of performing arts companies. Joe has been News Editor and contributing author to InPark Magazine since 2011. HIs writing has also appeared in Sound & Communications, LF Examiner, Jim Hill Media, and MiceChat. His blog, ThemedReality.com takes an unconventional look at the attractions industry. Follow on twitter @ThemesRenewed Joe lives in Sacramento, California with his fiancé, two dogs, and a ghost.
Share
Facebook
Twitter
Linkedin
Email
Print
WhatsApp
Pinterest
ReddIt
Tumblr
Previous articlePremier Rides Awarded for Best New Product at IAAPA Attractions Expo 2012
Next articleVIDEO: Dolly Parton Shares Dollywood’s Plans for 2013