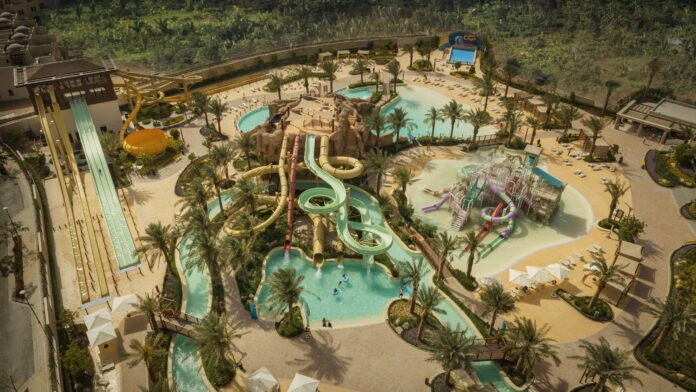 On July 3, Saraya Aqaba Waterpark, the first-of-its-kind in Aqaba and the largest waterpark in the Kingdom of Jordan, has officially opened its doors to the public. The waterpark attraction, located in the heart of Aqaba, Jordan’s coastal city, supplies guests with an aquatic adventure with over 25 rides, slides and experiences in addition to family-friendly eateries and shopping outlets. The waterpark is expected to welcome guests from across the kingdom as well as tourists from around the world to slide, float and swim by the Red Sea.

The inauguration ceremony, which marked the official grand opening of the waterpark, was held on July 2 with a symbolic button push to kick-off the evening’s festivities. The ceremony featured live entertainment including flash mob and percussion show performances, stilt walkers, jugglers and a celebratory parade accompanied by a live DJ music set.

Situated within the Saraya Al Aqaba Residential City, Saraya Aqaba Waterpark spans an area of 28,500 square meters (approximately 307,000 square feet). A uniquely themed waterpark, guests can enjoy a bevy of memorable experiences courtesy of rides and attractions inspired by Jordan’s most iconic landmarks including Wadi Rum, the Dead Sea, Jerash and many more.

Rides include Pella Plunge, a slide that defies gravity from the highest point in the waterpark, Dead Sea Drop, a near vertical plunge that plummets 40 feet downwards as one of the tallest and steepest slides in the country and Syagha Serpent, a slide through an abyss of darkness filled with twists, turns and spins among others.

Abdullah Al-Fraihat, CEO of Eagle Hills Jordan, the developer of the waterpark said, “First announced in 2018, we are immensely proud to be opening Saraya Aqaba Waterpark a mere two years later. This project is proof of our dedication to deliver world-class leisure and entertainment facilities to the city of Aqaba. Not only will this addition bolster Aqaba as a top tourism destination within the Kingdom of Jordan, it will also offer a fantastic guest experience with rides, slides and attractions to suit the entire family. We look forward to working closely with Farah Experiences, a leading regional operator of theme parks and attractions and the current operator of Saraya Aqaba Waterpark to deliver truly world-class experiences to our guests.”

Chris Van Der Merwe, General Manager of Saraya Aqaba Waterpark, said, “Following months of earnest preparation, it fills me with an immense amount of pride to see the doors of Saraya Aqaba Waterpark finally open to the public. Whether hopping on exhilarating rides and slides, taking on thrilling watersports, relaxing poolside or enjoying delectable dining and live entertainment — we have carefully curated a wide range of experiences to cater to the entire family.”

Van Der Merwe added, “The coastal city of Aqaba has long been a sought-after destination for domestic travelers and international tourists alike. I have no doubt that the addition of this world-class waterpark will make it a must-visit for families seeking the ultimate aquatic adventure this summer.”

Guests who want to refuel throughout their adventurous day at Saraya Aqaba Waterpark can visit Rose City Diner, the waterpark’s main dining outlet, where a variety of dining options with menus to satisfy everyone can be found. Guests who wish to purchase merchandise and pool essentials such as bathing suits, caps, goggles, and more can visit Al Siq Souk, the waterpark’s signature shopping outlet.

Saraya Aqaba Waterpark was developed by Eagle Hills, the largest developer in the Kingdom of Jordan and is currently managed and operated by Farah Experiences, a subsidiary of Abu Dhabi-based Miral Asset Management. Farah Experiences is also the manager and operator of theme parks and attractions on Yas Island including Ferrari World Abu Dhabi, Yas Waterworld, Warner Bros. World Abu Dhabi and CLYMB Abu Dhabi.