Sarner wins bid to create the "Dr Who" experience for BBC Sarner, known for concept, design and creation of themed visitor attractions around the globe, was awarded the contract following a competitive tender at the beginning of 2010 and is currently working on the pre-build prior to going on site at the beginning of December. The exhibition will officially open at London’s Olympia on 20th February 2011.

BBC Worldwide’s Head of Exhibitions and Events, Paula Al-Lach, has been working closely with Sarner on the project since its inception. Commenting on Sarner’s creativity she says, “The brief was to create an immersive experience based on the popular TV programme that would capture and celebrate the essence of Doctor Who. We felt that Sarner’s creative vision for the project matched the brief and that they proposed something completely different, all encompassing and a little bit scary.” 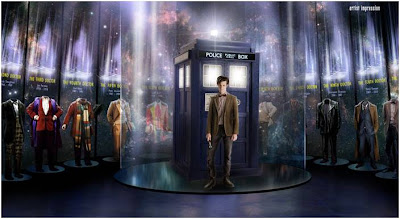 The main element of the exhibition will be an immersive timed dark walk experience in which visitors will become involved in their very own Doctor Who adventure. The ‘show’, which has been devised with input from Doctor Who executive producer and show runner Steven Moffat, will feature spectacular special effects and exclusively filmed footage. Visitors will be put at the heart of the action helping the Doctor and will go on an exhilarating journey through time and space, fending off threats from iconic monsters along the way. Following their adventure, visitors will enter a freeflow exhibition which charts the success of the show from the first series in 1963 to the most recent episodes starring Matt Smith and Karen Gillan. This will comprise interactive areas, displays and some classic memorabilia from the TV show, including several generations of the Daleks and original costumes.

“Doctor Who is a part of British culture and this bespoke project is an extremely exciting and prestigious one for us to be working on”, comments Michael Bennett, Sarner’s Creative Director. “Our idea was to put the visitor into a Doctor Who adventure and to achieve this mission we had to use all of the immersive skills and techniques we’ve developed over the years. The Doctor Who Experience is set to take exhibitions to another level for BBC Worldwide and has been designed to appeal to everyone, across the ages, regardless of how much they know about the history of Doctor Who. The show section features powerful scenic recreations, including a TARDIS interior, and uses a storyline featuring the current Doctor, Matt Smith, who we’ve been fortunate enough to work with, along with executive producer and show runner, Steven Moffat, and key members from BBC production in Cardiff.”

Judith Rubin
Judith Rubin ([email protected]) is a leading journalist, publicist, strategist, blogger, content marketing specialist and connector in the international attractions industry. She excels at writing about all aspects of design and technical design, production and project management. Areas of special interest include AV integration and show control, lighting design and acoustics, specialty cinema, digital video and world’s fairs. Judith has ties to numerous industry organizations. From 2005-2020 she ran communications, publications and social media for the Themed Entertainment Association (TEA). In 2013, she was honored with the TEA Service Award. She was development director of IMERSA, and co-chair of the 2014 IMERSA Summit. She was publicist for the Large Format Cinema Association in the 1990s, now part of the Giant Screen Cinema Association (GSCA) and has also contributed to the publications of PLASA, IAAPA and the International Planetarium Society. Already making her mark as a magazine and book editor, Judith joined World’s Fair magazine in 1987, which introduced her to the attractions industry. Launching as a freelancer in the mid 1990s she has contributed to dozens of publications and media outlets including Funworld, Lighting&Sound America, Sound & Communications, Urban Land, The Raconteur and The Planetarian. She joined InPark in 2010. Judith earned a Bachelor of Fine Arts from Pratt Institute. She has lived in New York City and the San Francisco Bay Area, and now makes her home in Saint Louis, where she is active in the local arts and theater community.
Share
Facebook
Twitter
Linkedin
Email
Print
WhatsApp
Pinterest
ReddIt
Tumblr
Previous articleBRC Imagination Arts looks back on a good run at Shanghai Expo 2010
Next articlePGAV Destinations Celebrates 50 Project Openings in Ten Years – Most Prolific Period in Firm’s 45-Year History