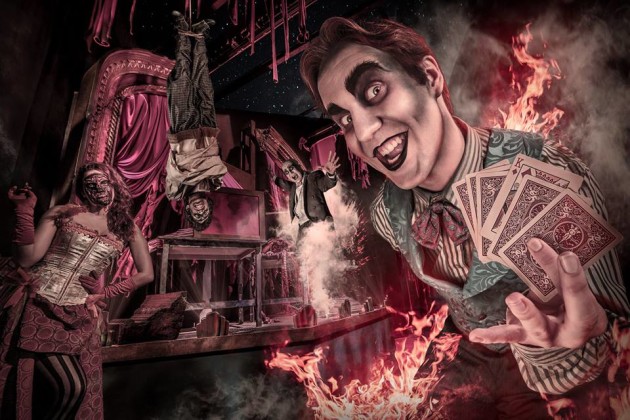 This all-star lineup of haunt industry royalty is sure to be one of the highlights of ScareLA 2015, signifying only the second time anywhere that SoCal’s biggest Halloween attractions have come together on one stage in a show of support and unity, representing some of the the biggest Halloween events in the world.

Lara Hanneman will represent the granddaddy of all park haunts, Knott’s Scary Farm; JJ Wickham will reign from the fog of Queen Mary’s Dark Harbor; Mark Wing will creep out of the shadows of Valencia and represent Six Flags Magic Mountain Fright Fest; and Chris Williams will shed some light on the gruesome underside of Universal Studios Hollywood’s Halloween Horror Nights.

“It is terribly exciting to see ‘Making Monsters’ expand and continue to grow from what we accomplished last year,” says Rick West. “Southern California is the birthplace of the theme park haunt industry, so having these big players come together once again to chat about their roles in the creative process with fans is something we are very proud of. It’s groundbreaking and at the very core of what ScareLA is all about.”

Haunted attraction art directors play a key role in designing and developing the look and feel of ‘scare zones’ entertaining millions in Southern California each fall.  From facades to individual scenes and more – art directors guide and build large teams to ensure the utmost quality of every facet of the experience.

In addition to hosting representatives from each top attraction, ScareLA is pleased to announce that major presentations by Knott’s Scary Farm, Queen Mary’s Dark Harbor, Six Flags Magic Mountain Fright Fest, and Universal Studios Hollywood’s Halloween Horror Nights will be on tap throughout the weekend during ScareLA, giving fans non-stop thrills and excitement from morning till night.

Joe Kleimanhttp://wwww.themedreality.com
Raised in San Diego on theme parks, zoos, and IMAX films, Joe Kleiman would expand his childhood loves into two decades as a projectionist and theater director within the giant screen industry. In addition to his work in commercial and museum operations, Joe has volunteered his time to animal husbandry at leading facilities in California and Texas and has played a leading management role for a number of performing arts companies. Joe has been News Editor and contributing author to InPark Magazine since 2011. HIs writing has also appeared in Sound & Communications, LF Examiner, Jim Hill Media, and MiceChat. His blog, ThemedReality.com takes an unconventional look at the attractions industry. Follow on twitter @ThemesRenewed Joe lives in Sacramento, California with his fiancé, two dogs, and a ghost.
Share
Facebook
Twitter
Linkedin
Email
Print
WhatsApp
Pinterest
ReddIt
Tumblr
Previous articleSEGD’s Branded Environments Workshop Returns to Los Angeles
Next articleCreative Works Designs Chicago Themed Mini Golf for Lucky Strike Entertainment