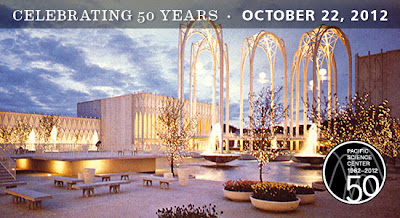 The United States Science Exhibit began with Ray and Charles Eames’s 10-minute short film The House of Science, followed by an exhibit on the development of science, ranging from mathematics and astronomy to atomic science and genetics. The Spacearium held up to 750 people at a time for a simulated voyage first through the Solar System and then through the Milky Way Galaxy and beyond. Further exhibits presented the scientific method and the “horizons of science.” This last looked at “Science and the individual,” “Control of man’s physical surroundings,” “Science and the problem of world population,” and “Man’s concept of his place in an increasingly technological world.”

The theater space that housed The House of Science is now the science center’s Eames IMAX Theater.

Joe Kleimanhttp://wwww.themedreality.com
Raised in San Diego on theme parks, zoos, and IMAX films, InPark's Senior Correspondent Joe Kleiman would expand his childhood loves into two decades as a projectionist and theater director within the giant screen industry. In addition to his work in commercial and museum operations, Joe has volunteered his time to animal husbandry at leading facilities in California and Texas and has played a leading management role for a number of performing arts companies. Joe previously served as News Editor and has remained a contributing author to InPark Magazine since 2011. HIs writing has also appeared in Sound & Communications, LF Examiner, Jim Hill Media, The Planetarian, Behind the Thrills, and MiceChat His blog, ThemedReality.com takes an unconventional look at the attractions industry. Follow on twitter @ThemesRenewed Joe lives in Sacramento, California with his wife, dog, and a ghost.
Share
Facebook
Twitter
Linkedin
Email
Print
WhatsApp
Pinterest
ReddIt
Tumblr
Previous articleTEA Member CNA SOPHIS Provides Expertise to Home Design Industry With New Co-Venture
Next articleChance Rides to Manufacture 250 ft Tall Bussink Observation Wheel