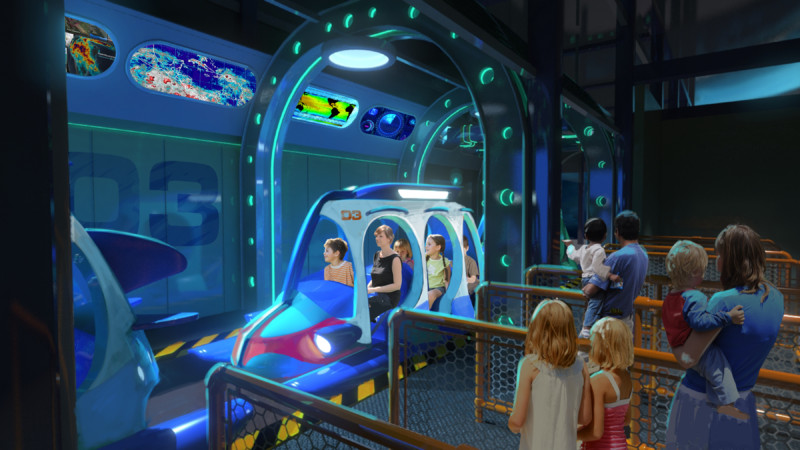 The new SeaWorld is rebranding and reaching out

“There’s a new SeaWorld coming. It doesn’t walk away from the strengths of its heritage, but it’s supercharged and focused,” said Anthony Esparza, Chief Creative Officer, SeaWorld Parks & Entertainment.

Esparza is a key member of the management team headed by CEO Joel Manby, a charismatic figure who during his former role as CEO of Herschend Family Entertainment appeared on the CBS show “Undercover Boss” and penned the popular management treatise “Love Works.” Manby took the helm in April 2015, and Esparza joined him from Herschend a few months later.

This is no quiet rebranding. The issues with which SeaWorld must grapple are issues for all zoos and aquariums, as well as theme parks. As we reported in “A Tough Year,” (InPark issue #54, Oct 2014) industry leaders at AZA (Association of Zoos & Aquariums) have been outspoken in the need to take active steps and change the conversation. It was time to rethink the ways animals and the public are brought together – but also time to defend best practices and clarify organizations’ true positions and actions – in the case of SeaWorld, to stand on the strength and passion of everything good about the company and how it pursues its mission of conservation, rescue, research and education.

Enter Manby. SeaWorld had already made attempts to change the conversation prior to Manby’s arrival, with mixed results. Erika Fry wrote in a Sept 2016 article in Fortune magazine, “Manby was beginning to understand that changing the company’s reputation would take more than an ad campaign.” Fry went on to detail Manby’s rebounding perseverance and incremental successes – shifts of company culture, dialogs opened and reopened, partnerships that previously had seemed unlikely.

In March 2016, SeaWorld made the historic decision to end its orca whale breeding program and end theatrical orca performances. SeaWorld’s existing population of orcas will be its last. The company also announced a broad partnership with the Humane Society of the United States – to cooperate on marine conservation and to advocate for an end to commercial killing of whales and seals and an end to shark finning. That partnership is backed by a $50 million commitment over the next five years that is said to make SeaWorld the world’s leading marine animal rescue organization.

The new SeaWorld is honoring its commitments with actions as well as funds:

SeaWorld San Diego recently held its final “One Ocean” theatrical orca show, transitioning to a more educational and documentary style “Orca Encounter” to debut this summer. The orca performances at SeaWorld Orlando and San Antonio will follow suit by 2019. SeaWorld spokespersons are confident these and other changes will allow them to “get back to our roots as a company focused on fun and meaningful experiences and move SeaWorld beyond concerns people have expressed about large animals such as orcas under human care.”

Recent new attractions to the parks, like Mako at SeaWorld Orlando, and new attractions opening soon such as Wave Breaker: The Rescue Coaster™ at SeaWorld San Antonio and Ocean Explorer at SeaWorld San Diego are designed to blend advocacy, education and family-oriented fun. This summer, the company will introduce its first virtual reality experience at SeaWorld Orlando in Kraken® VR, using technology to acquaint guests with endangered and extinct animals. SeaWorld’s evolution includes plans for a brand-new, state-of-the-art integrated resort called SeaWorld Abu Dhabi, and the company is making the most of this opportunity to develop the property along a different format than the existing parks.

He said, “The new SeaWorld reflects true changes and big decisions. We’ve reorganized internally to get it done. This 50-year-old company is evolving with a fresh, new branding direction, a new team in place, a new culture and vision, and an inclusive approach, open to feedback.”

Esparza said, “I joined this company because I saw opportunity. SeaWorld has a great heritage as a company doing something with a purpose. There were challenges, but Joel and I and others in the management team saw the jewel underneath – not just thrills or family closeness, but a place where we can bring meaning and cause behind the fun. That’s cool.  A purpose-driven theme park is interesting. Our purpose can be interpreted in a lot of interesting ways. It can be an up-close animal experience, a big ride that is wild and wonderful, or a digital environment, or a different kind of undersea experience. We will interpret SeaWorld a little bit more broadly now.”

Part of the new approach is reaching out to the industry to help realize SeaWorld’s goals. The outreach is manifesting in alliances with trade groups such as the Themed Entertainment Association (TEA), which recently collaborated on a Deep Blue Creative recruitment event for its members; the Urban Land Institute (ULI), where Esparza is part of the Entertainment Council; the US Institute of Theater Technology (USITT), where SeaWorld has a recruitment booth; and the VR Summit, where Esparza recently gave a talk.

The new, inclusive culture also includes SeaWorld partnering with organizations that will help further its research, rescue and conservation goals, like world-renowned artist and marine conservationist Guy Harvey, and with innovation and technology companies that will help it create great new guest experiences.

“We’re telling the world we’re not going to do it alone by ourselves,” said Esparza. “We’re flinging the doors open and inviting experts and innovators from creative companies and individuals to work with us, collaborate with us and inspire us.”

Changing the conversation at SeaWorld has meant asking questions. “How do we align around being protectors of animals and the wonders of our world?” said Esparza. “How do we proceed in exploring this unique, blue planet, and help others to join us and motivate them to take action? Why does a theme park company do that, how does a theme park company do that? My part is the great guest experience: we have to be super creative and innovative. Deep Blue Creative is the internal effort around that. We’re trying to ignite a world class innovation group.”

The difference to other creative divisions such as Universal Creative and Walt Disney Imagineering, in Esparza’s view, goes to mission. “Deep Blue Creative is a movement within the whole company to be working to bring that mission to life – a new internal network to talk creatively, to share ideas; inspire our team to understand our new brand and identity.”

Esparza is making sure that the creatives are imbued with the same mission and dedication as the “guest facing ambassadors.” He advocates that SeaWorld has the edge in authenticity – the company’s animal ambassadors walk the talk. “These are not people being cast in a role – it’s truly their life passion and work. They are communicators, educators, explorers and rescuers who have just come back from an animal rescue, conservation project, or school visit, sharing their passion with the world.” 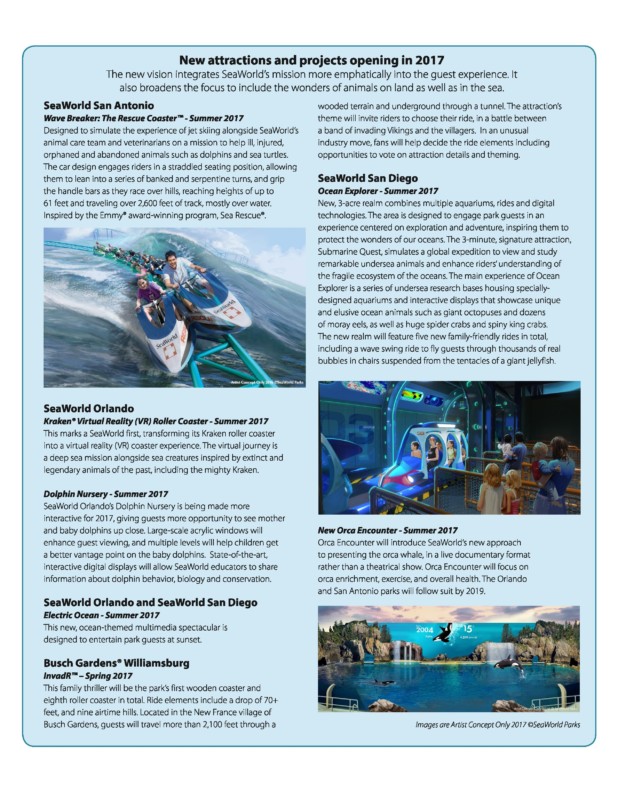 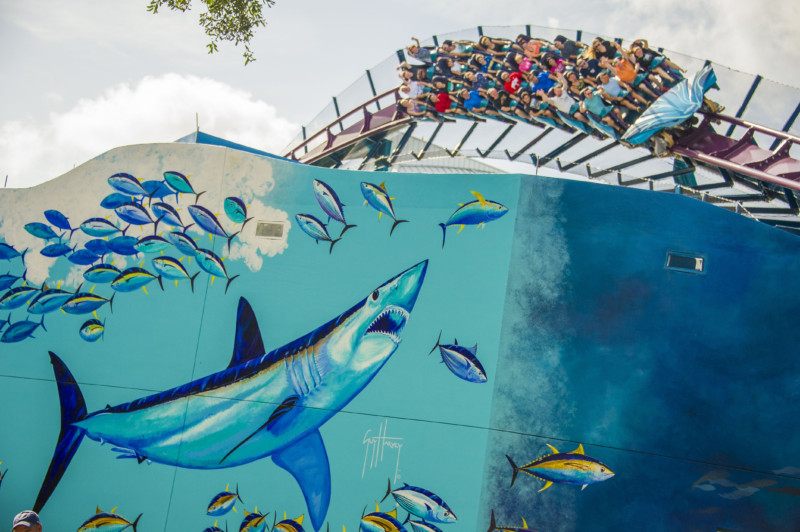 Esparza points to the company’s Emmy winning and Emmy nominated programs, Sea Rescue and The Wildlife Docs, as examples of SeaWorld showcasing its ambassadors and their real-life experiences. “Team members who appear on these national broadcasts are the very same ambassadors you’ll meet in the parks,” he said. “The SeaWorld animal rescue team is a real working team. They go out 24/7 assisting animals in need, rescuing more than 29,000 animals in our 50-year history. When inspired kids write notes to us after they’ve had a memorable experience at SeaWorld… that’s what we can magnify, that’s doing what a good, purpose-driven company does. We’re building the brand around these people – not just the animals. Those are our superheroes.”

The real-life SeaWorld superhero’s lifestyle is filled with elements and adventures for Deep Blue Creative to draw upon. “There are multiple IPs being built here,” said Esparza, “and the first is about rescue. The word ‘Entertainment’ in our company title needs to mean something different – we are taking the understanding from traditional entertainment to meaningful kind of wonder and excitement. We can tell this story.”

In the course of conversation Esparza referred more than once to space exploration. In his quest to reimagine the new SeaWorld and help propel the company into the future, he’s spent a lot of time listening to futurists. “For us to be part of the future, we have to understand what everyone else is doing, and the best models of inspiration,” he said. “One of the best comments I heard was from Graham Hawkes in a TED talk about how billionaires are investing in space. Hawkes observed that the rockets are turned the wrong way – that we have a wild frontier right here – our own world – still largely unexplored. There are untold wonders still left, on land and in the sea; let’s go find them.” • • •

Joe Kleimanhttp://wwww.themedreality.com
Raised in San Diego on theme parks, zoos, and IMAX films, InPark's Senior Correspondent Joe Kleiman would expand his childhood loves into two decades as a projectionist and theater director within the giant screen industry. In addition to his work in commercial and museum operations, Joe has volunteered his time to animal husbandry at leading facilities in California and Texas and has played a leading management role for a number of performing arts companies. Joe previously served as News Editor and has remained a contributing author to InPark Magazine since 2011. HIs writing has also appeared in Sound & Communications, LF Examiner, Jim Hill Media, The Planetarian, Behind the Thrills, and MiceChat His blog, ThemedReality.com takes an unconventional look at the attractions industry. Follow on twitter @ThemesRenewed Joe lives in Sacramento, California with his wife, dog, and a ghost.
Share
Facebook
Twitter
Linkedin
Email
Print
WhatsApp
Pinterest
ReddIt
Tumblr
Previous articleDeep Blue Creative
Next articleBuilding a Better Attractions Industry in Asia