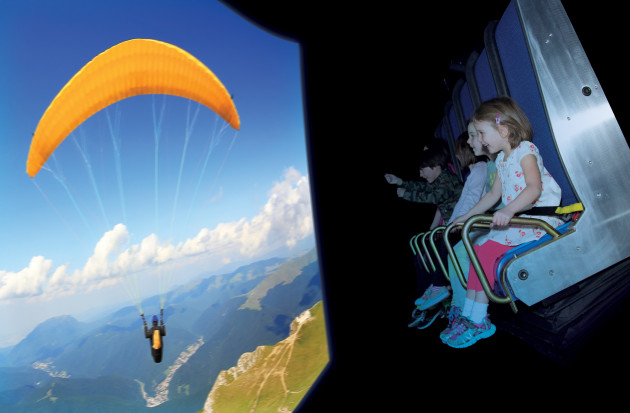 SkyRide’s superior electric motion platform capabilities, together with laser projection and our extensive film library, provide the audience with a fully immersive flying experience. Attractions where flight and suspended disbelief oriented experiences are the objective, will find SkyRide a compelling product. In 1984 SimEx-Iwerks brought to market “Tour of the Universe” at the CN Tower in Toronto.  ‘Tour of the Universe’ was the industry’s first such travelogue type simulated flight experience that allowed travellers to tour the universe.  Japan and other destination locations followed with local flight content.

Later, SimEx provided a new generation of travelogue technology with SkyRide at the Empire State Building. Geared to tourists, SkyRide is still is a major destination attraction in New York after 18 years. Today, with the announcement of its new SkyRide, SimeEx is providing another generation of simulator attraction equipment that could take guests on a flight around your location.