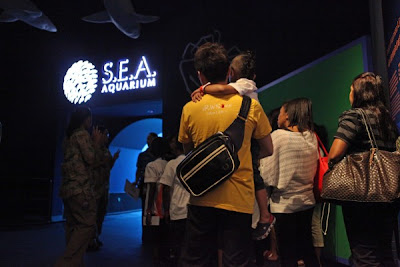 S.E.A. Aquarium – the world’s largest aquarium – is home to 100,000 marine animals of over 800 species in 45 million litres of water. Comprising 10 different zones with 49 habitats, the aquarium takes guests on an underwater voyage beginning from Southeast Asia, and continues through the Arabian Gulf and the Open Ocean. Along the way, guests can expect to meet majestic manta rays, hammerhead sharks, bottlenose dolphins and other marine creatures.

S.E.A. Aquarium Senior Curator Grant Willis said: “S.E.A. Aquarium offers not only a stunning display of habitats, but also education and conservation programmes in which families and guests can participate. Younger guests will be thrilled to know that we have specially-designed exhibits such as the Discovery Touch Pool, the Lens Aquarium and Floor Aquarium, to provide them up-close encounters with our marine residents.” 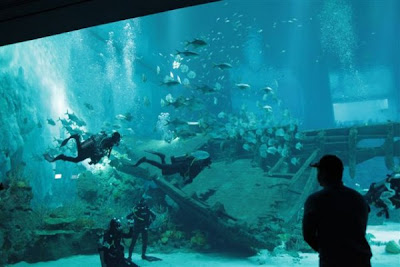 The centerpiece of the Aquarium is the Open Ocean habitat, seen through the world’s largest viewing panel, at 36 metres wide by 8.3 metres tall; Guests viewing the habitat could experience the feeling of being on a cavernous ocean floor. The habitat is flanked by an Ocean Dome –an all-round viewing area and the Ocean Restaurant, an outlet propagating sustainable seafood principles. Eleven Ocean Suites occupy the opposite site of the habitat, offering a twist to the proposition of sea-view by providing guests the experience of waking to an under-the-sea vista. 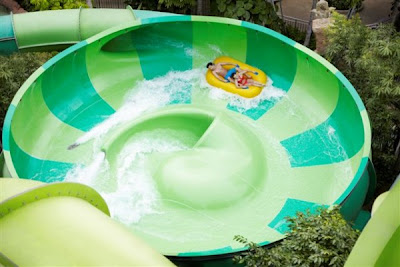 The Adventure Cove Waterpark is a splashing affair for thrill-seekers. Guests can choose to get their adrenaline pumping with six water slides, including the region’s first hydro-magnetic coaster – Riptide Rocket; chill out at the Bluwater Bay wave pool; or relax while tubing along the Adventure River. One of the world’s longest lazy-rivers, the 620-meter river meanders through 14 themed scenes of tropical jungles, grottos, a surround aquarium and more. 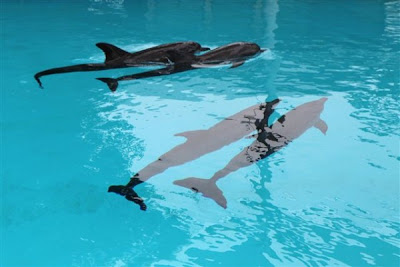 The waterpark is also the only of its kind in the region to have marine life. Guests will have the opportunity to snorkel among thousands of fish at the colourful Rainbow Reef, or to sign up for rayfeeding and interaction programmes with sharks and dolphins, which will be introduced next year.

Mr. Edmond Quah, Director of Park Operations at Adventure Cove Waterpark said: “Adventure Cove Waterpark will add a whole new dimension to water-based attractions in the region. We have gathered some of the most exciting and thrilling waterslides, and combined them with educational programmes on some of the ocean’s most inspiring creatures. Guests interacting with the rays, for example, will learn more about the animal from an aquarist. We hope these experiences will move guests to take action to protect the oceans when they leave the park.”


Guests may check the MLP Blog at http://mlp.rwsentosablog.com for updates.

ABOUT RESORTS WORLD SENTOSA
Resorts World Sentosa (RWS), Singapore’s first integrated resort is located on the resort island of Sentosa.
Spanning 49 hectares, the resort opened in January 2010 and welcomed over 30 million visitors in its first two years of opening. RWS is home to the region’s first-and-only Universal Studios theme park, the Maritime Experiential Museum, a casino, luxurious accommodation in six unique hotels, the Resorts World Convention Centre, celebrity chef restaurants, a world-class spa as well as specialty retail outlets. The resort also offers entertainment including public attractions such as the Crane Dance and the Lake of Dreams. Open now is the world’s largest oceanarium – the Marine Life Park. Resorts World Sentosa is wholly owned by Genting Singapore, a company of the Genting Group. For more information, please visit www.rwsentosa.com.

Joe Kleimanhttp://wwww.themedreality.com
Raised in San Diego on theme parks, zoos, and IMAX films, Joe Kleiman would expand his childhood loves into two decades as a projectionist and theater director within the giant screen industry. In addition to his work in commercial and museum operations, Joe has volunteered his time to animal husbandry at leading facilities in California and Texas and has played a leading management role for a number of performing arts companies. Joe has been News Editor and contributing author to InPark Magazine since 2011. HIs writing has also appeared in Sound & Communications, LF Examiner, Jim Hill Media, and MiceChat. His blog, ThemedReality.com takes an unconventional look at the attractions industry. Follow on twitter @ThemesRenewed Joe lives in Sacramento, California with his fiancé, two dogs, and a ghost.
Share
Facebook
Twitter
Linkedin
Email
Print
WhatsApp
Pinterest
ReddIt
Tumblr
Previous articleSpain Looks to Themed Mega Resorts During Economic Crisis
Next articleUSC Researchers Guiding the Smithsonian American Art Museum to the Next Generation of the Internet